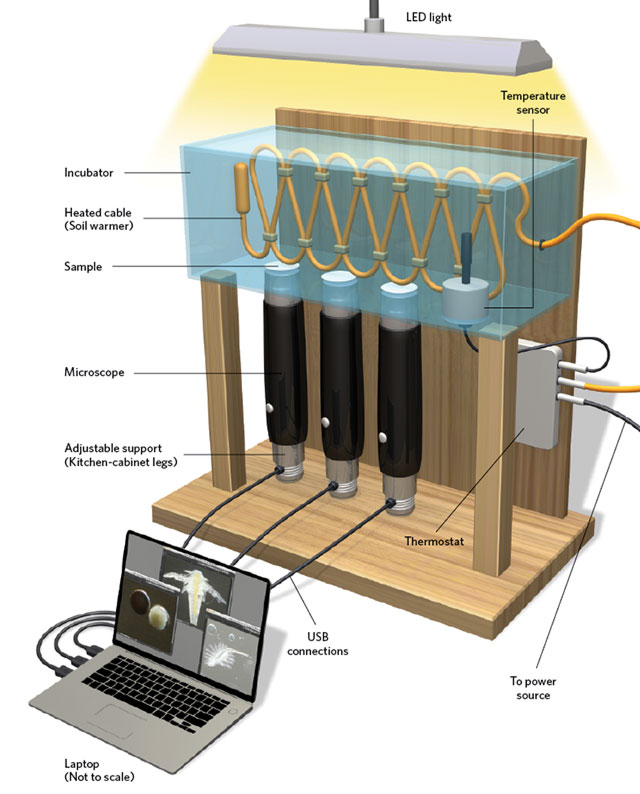 LOOK AT 'EM GO: The LOCOMOTIS microscopy rig includes three inexpensive microscopes, each mounted below a sample in a dish. Software records data coming in from the three scopes simultaneously. A heated cable in the sample chamber allows for temperature manipulation.© GEORGE RETSECK

Adam Lynch, a doctoral student at Brunel University London, studies the effects of waterway pollutants on the physiology of the freshwater snail Biomphalaria glabrata. As part of his thesis, he planned to observe—using time-lapse imaging—how a variety of chemicals affect the motility of the snail’s immune cells.

To perform such imaging, researchers traditionally placed a cell culture dish on an inverted microscope and took photos with a software-driven digital camera at regular time intervals. To look at several experimental conditions in parallel—which Lynch hoped to do—would thus require several microscopes, or an automated stage fitted to one microscope that enabled precision movements of a...

Lynch did not have access to either, but he did have access to the Internet. There he bought three cheap microscopes, each of which could transmit digital images to his laptop, and found computer programmer Junian Triajianto, an independent coder who wrote software allowing image recording from all three microscopes at once. The result is LOCOMOTIS—a Low-Cost Motility Tracking System—comprised of the three amateur mini-microscopes, some adjustable kitchen-cabinet legs, a soil warmer, and a desk lamp. Lynch built a case for the microscopes and a temperature-controlled box for the samples, and then watched as the snail immune cells moved. The system provides an extremely economical alternative to expensive professional microscope setups for observing cell movements.