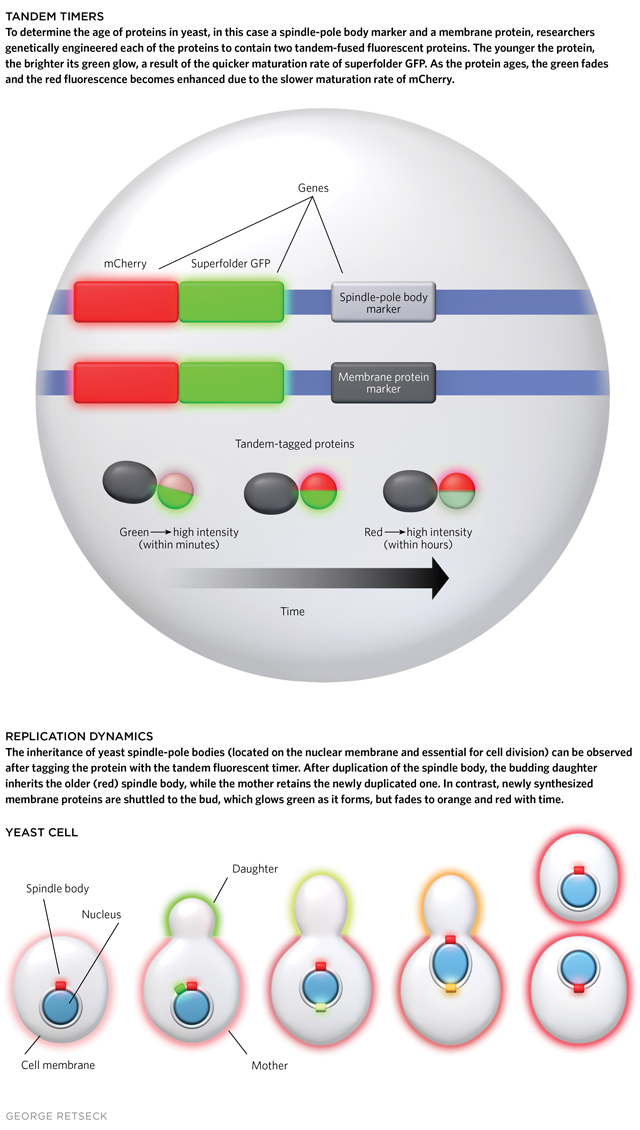 Fluorescent proteins are invaluable tools for measuring the abundance and trafficking of other proteins in a cell. A bigger challenge has been to monitor a protein’s life cycle—its intracellular movements and its turnover—which requires a timer to indicate a protein’s age. Earlier iterations of fluorescent timers used one protein that changed color over time, “but this is at the expense of sensitivity and brightness,” says Michael Knop of the University of Heidelberg.

To improve upon the idea of a fluorescent timer, Knop and his colleagues fused two different fluorescent proteins to produce a timer that glows with different colors and intensities depending on the age of the target protein. The first of the fluorescent proteins, superfolder GFP (sfGFP), reaches peak intensity very quickly, while the second, mCherry, matures more slowly, reaching its peak several hours later. By measuring the intensity of mCherry as it increased, and comparing it to...

Vladislav Verkhusha, a professor at Albert Einstein School of Medicine, said mCherry and sfGFP were good choices for the timer because they are bright and they reliably fold properly to form the chromophores. “Definitely people will use [this approach] because it’s genetically encoded and an easy technique,” he says. “You just need cells and a fluorescence microscope.” (Nat Biotechnol, 30:708-16, 2012.)