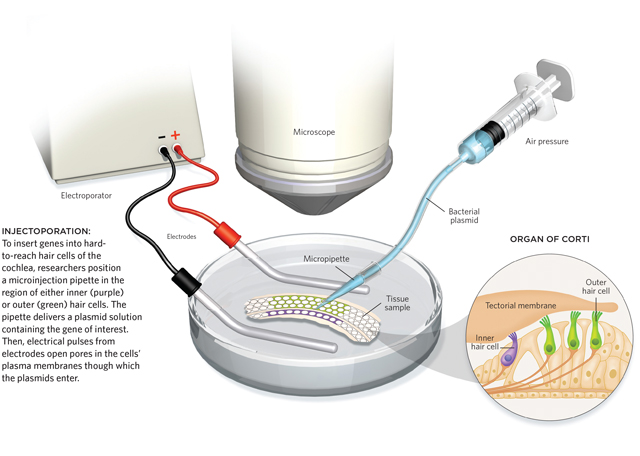 The study of human hearing—how it develops, functions, and can diminish with age or disease—would be a great deal easier if only the hair cells of the ear weren’t so difficult to get at. These mechanosenory cells, which convert sound-wave vibrations into electrical signals for the auditory nerves, are buried deep within the organ of Corti in the cochlea and are largely inaccessible when it comes to transfecting genes for functional studies, even when the tissue is cultured.

Indeed, with the exception of laborious viral vector–based delivery, standard transfection approaches “just don’t work,” says hearing researcher Tony Ricci of Stanford University. But now, Ulrich Müller and his team from the Scripps Research Institute have found that by dissecting out the cochlear duct, injecting the genetic payload right next to the hair cells, and then applying an electric current to temporarily create pores in the hair cells’...

“It’s very exciting because it fills a gap, technically, in what we are able to do when trying to investigate and manipulate these auditory sensory cells,” says Ricci. For gene-function studies, he says, you often “had to make a mouse,” which can take up to a year. But now, “you can basically use ‘injectoporation’ as a tool for screening molecular interactions and then you can decide if you want to make a mouse later,” he says.

Müller has already used the technique to decipher components of the elusive hair-cell mechanotransduction machinery, but says that, in principle, injectoporation could be used for any tissue of the body “where access of the plasmid to the cells of interest is limited.” (Nature Protocols, 9:2438-49, 2014)