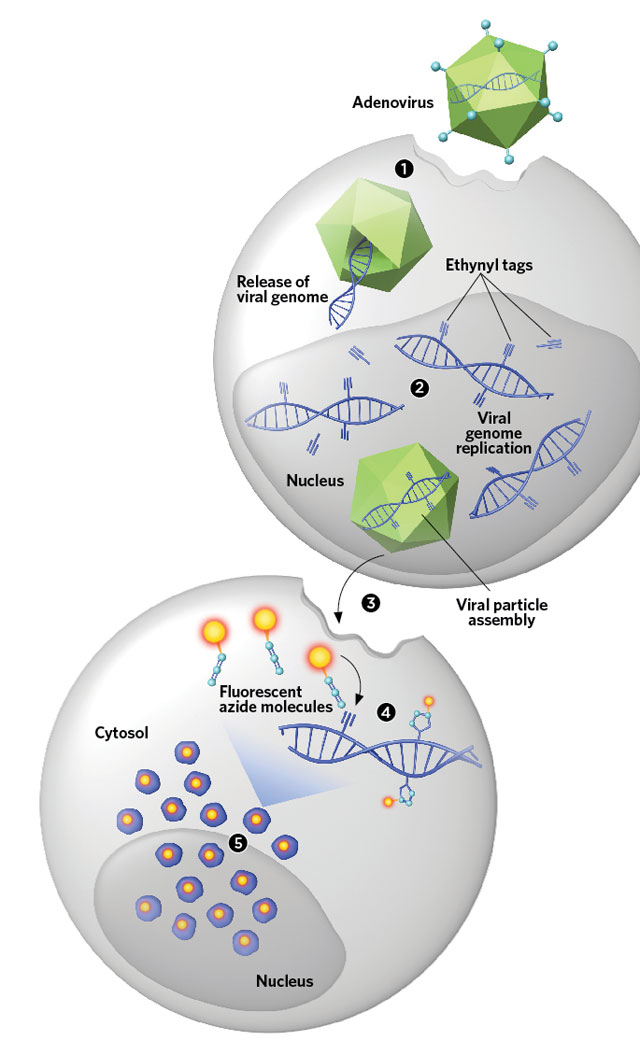 TAG AND TRACK: An adenovirus infects a cell (1). The viral DNA then incorporates ethynyl-tagged nucleosides during replication (2). The tagged virus is harvested and infected into another cell (3). After the virus sheds its outer coat, fluorescent azide molecules bind to the ethynyls (4), offering a way to visually track individual viral genomes in the cytosol and nucleus (5). © GEORGE RETSECKObserving viruses infecting cells is essential for making plans to defeat them, but the two main methods for viewing viral DNA in host cells have limitations.

Genetically engineering the virus to contain sequences that can be bound by fluorescent proteins may interfere with the structure and behavior of the viral DNA, says Urs Greber, a virologist at the University of Zurich. And with the other popular technique, fluorescence in situ hybridization (FISH), “one is never sure if every [viral] DNA in the cell is equally accessible”...

So Greber and his colleagues have developed a technique that avoids denaturation and modifies the viral genomes in a manner compatible with continued replication and viability. They use ethynyl-tagged versions of nucleotide precursors called nucleosides, which are incorporated into viral genomes during replication. The tagged DNA is detected with fluorescent azide molecules that bind to the ethynyls in a reaction called “click chemistry.” Cells can either be fixed immediately to look at replication sites or used to harvest labeled virus for infecting other hosts. Greber employs superresolution fluorescence microscopy to view individual genomes.

Using the approach, Greber has found that, contrary to FISH-based observations, adenovirus genomes (pre-labeled before infection) are not all delivered directly to the nucleus for replication. “Much of [the virus] remains in the cytosol,” he says. This is “a big surprise” says Lynn Enquist, a molecular biologist at Princeton University.

Keeping viral DNA in the cytoplasm “might be part of the cell’s intrinsic defense against viral infections,” Enquist says, adding that Greber’s new technique offers an ideal system to find out. (Cell Host & Microbe, 14:468-80, 2013)