Linking air pollutant exposure to health outcomes—which can include impaired learning and memory as well as increased risk for respiratory, cardiovascular, and other diseases in people—poses a data-collection challenge for researchers. Sensors capable of detecting different classes of pollutants exist, but few devices can collect a broad spectrum of environmental contaminants. Combining sensors into a single device often requires that participants carry a backpack, one that may be too large and heavy for members of vulnerable populations, such as children and the elderly, to conveniently tote around.

In search of a better solution, Yale University environmental health scientist Krystal Pollitt and her team designed a cheap, wearable sensor that could be used for large-scale studies of vulnerable populations. The Fresh Air wristband consists of a triethanolamine-coated foam that samples nitrogen dioxide and a polydimethylsiloxane (PDMS) sorbent bar that absorbs airborne organic pollutants.

Pollitt’s design avoided the batteries and air pumps that made other sensors heavy. Instead, pollutants passively absorb into the PDMS bar over several days. When their concentrations are high enough, researchers use gas chromatography–mass spectrometry to analyze the samples.

FASHIONABLE DETECTOR: To make an air pollution detector that study subjects would want to wear, researchers used components that can fit into a wristwatch-style device. Inside the wristband, air pollutants diffuse into two types of sorbent material over time: triethanolamine-coated foam and a polydimethylsiloxane (PDMS) sorbent bar. The sorbent material is later removed from the wristband and the amount of pollutant collected is quantified. WEB | PDF
© george retseck

The lack of real-time pollutant tracking data is one drawback of this passive sampling approach. Without a battery or pump, “you don’t have anything that’s driving the air through the sample to concentrate [pollutants] faster,” explains Pollitt.

However, real-time pollutant sensors aren’t able to detect all the pollutants researchers are interested in. For example, polycyclic aromatic hydrocarbons, a class of compounds emitted by burning fuel that’s been linked with liver damage, are present at levels too low to be detected by currently available real-time detectors. “Some esoteric, rarefied pollutants can’t be detected in miniaturized wearable sensor technology at the moment,” says Benjamin Barratt, an environmental researcher at King’s College London who was not involved in this study. “So for them we have to move to passive sampling.”

Pollitt’s team tested the wearability of the wristband on adult volunteers over 24 hours, then recruited 33 children age 12–13 years to wear the wristband for 4–5 days. The researchers obtained sensitive and reproducible pollutant readings for nitrogen dioxide as well as airborne volatile organic compounds and polycyclic aromatic hydrocarbons. They are now trialing the wristband in India and China to track maternal pollutant exposure during pregnancy.

The researchers have demonstrated “supreme wearability” with their wristband, says Ellison Carter, a civil and environmental engineer at Colorado State University. Carter, who did not participate in the research, notes that for a wearable pollutant detector to be successful, people must want to keep wearing it. (Environ Sci Technol Lett, doi:acs.estlett.9b00800) 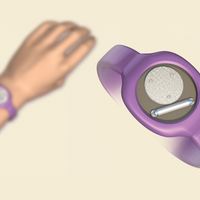