ENDOCANNABINOID SIGNALING IN THE BODY

The two classical cannabinoid receptors, CB1 and CB2, are expressed by enteric neurons, immune cells, and other cell types within the gastrointestinal tract. The gut and the liver also synthesize two key ligands—anandamide (AEA) and 2-arachidonoylglycerol (2-AG)—for those receptors. Combined, this signaling system acts locally in the gut and liver, but also communicates with the brain to affect food intake, pain, inflammation, and more. 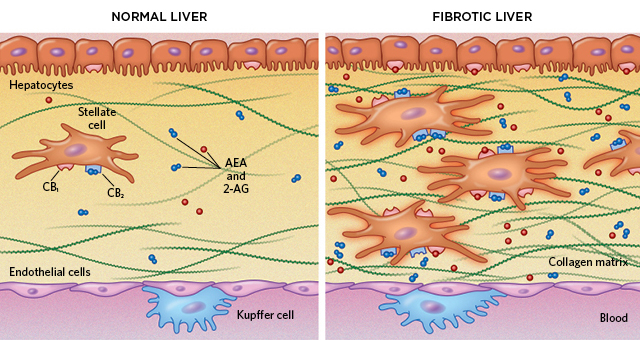 In the liver, endocannabinoids are thought to act almost like hormones, stimulating cell division at some times, cell death at others. In the healthy liver, expression of CB receptors is very low, but in a diseased liver expression increases, and endocannabinoid ligands are released from all four cell types shown here. Many ligands are produced and bind to CB1 receptors, causing lipid accumulation and insulin resistance in hepatocytes, and increased proliferation of... 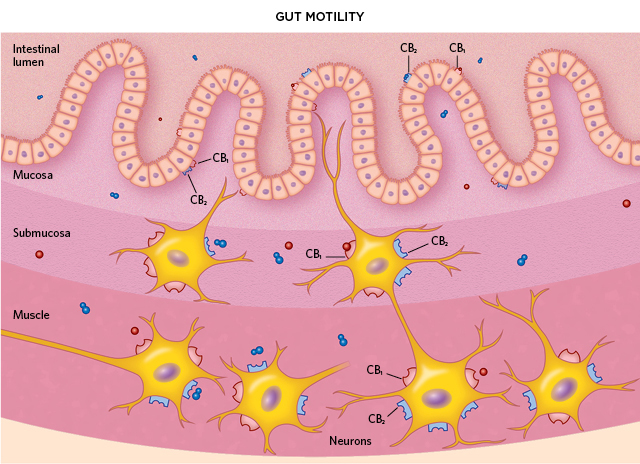 © PENS AND BEETLES STUDIOSBoth CB1 and CB2 regulate the rhythmic contractions of the intestinal tract, called gut motility. In the healthy gut, CB1 predominates, but during intestinal inflammation, CB2 also contributes to motility. Conditions such as inflammatory bowel disease and celiac disease often exhibit increased prevalence of these receptors, which results in decreased motility. Endocannabinoid signaling has also been shown to reduce inflammation, increase the permeability of gut epithelial cells, and signal hunger to the brain.