Plants appear to use RNA molecules to resist fungal infection, while fungal microbes call upon RNA to enhance their spread. Both types of organisms achieve their desired outcomes through the same molecular process: RNA interference (RNAi), which disrupts gene expression by destroying target messenger RNAs.

FROM PLANT TO PATHOGEN

The plant produces a small RNA precursor, either a long double-stranded RNA or a pre-microRNA, with sequence similarity to a fungal gene (1). Researchers have engineered the sequence into the genomes of crop plants or model organisms and demonstrated superior fungal resistance, although one recent study showed plants may naturally encode sequences to protect themselves against pathogens.

Evidence points to the idea that the small RNA precursors can pass directly to the fungal cell (2)  or undergo processing into small RNAs prior to transfer (3). If the precursor leaves the plant intact, the fungus’s processing machinery chops it up (4). In...

Upon additional processing in the fungal cell, a single strand of the small RNA becomes part of the RNA-induced silencing complex (RISC), which then destroys an mRNA with a matching sequence (5). If the transcript is essential to fungus growth, the pathogen dies and the plant staves off disease. 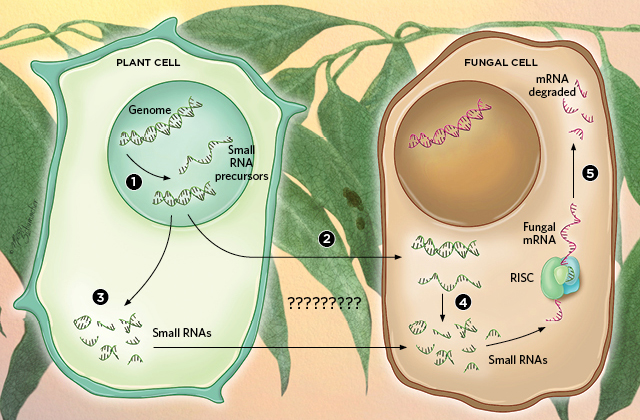 FROM PATHOGEN TO PLANT

Scientists have also discovered that fungal pathogens can send RNAs into plant cells to aid their invasion. Similar to the reverse process, the fungus generates small RNA precursors whose sequences complement those of plant mRNAs (1). A fungal protein slices up the small RNA precursors to produce small RNAs (2), which are then passed over to the plant cell via unknown means.
Inside the plant cell, the small RNAs are incorporated into the plant’s RISC and direct the complex to degrade the target transcript (3). If the genes affected are involved in plant immunity, the fungal infection expands. 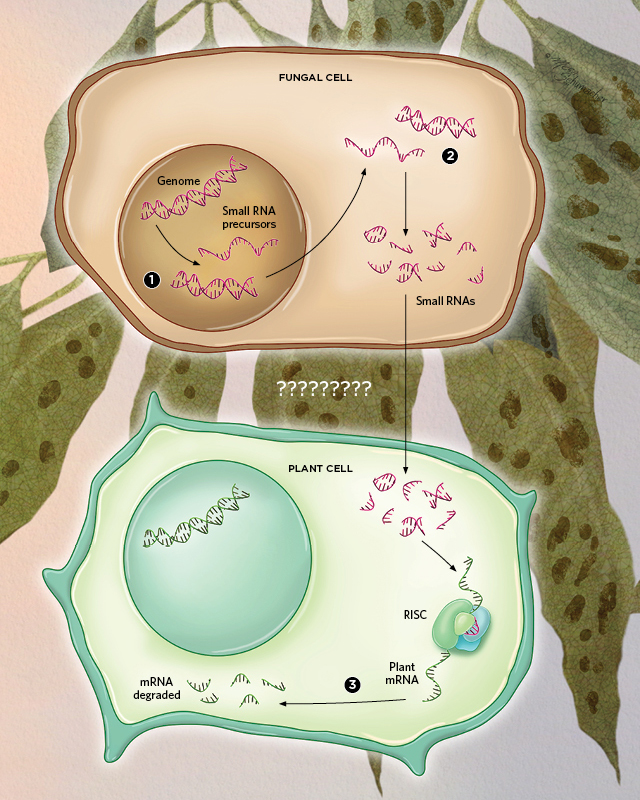