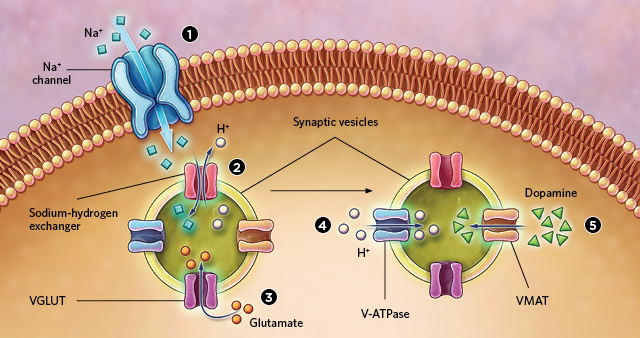 © EVAN OTO/SCIENCE SOURCE
Researchers have found that synaptic vesicles releasing dopamine across neuronal synapses in fruit flies and mice can dynamically adjust the neurotransmitter content in response to neuronal firing. And they propose a mechanism to explain how. When the axon terminal depolarizes, sodium ions flow into the cell (1). The increased sodium ion concentration activates sodium-hydrogen exchangers in the vesicle membrane that transport one sodium ion into the vesicle for every proton out (2). This action increases the difference in electrical charge across the vesicle membrane, activating a transporter protein, VGLUT, which pumps another neurotransmitter, negatively charged glutamate, into the vesicle (3). The resulting buildup of internal negative charge triggers the pumping of more protons into the vesicle, increasing the pH gradient across the membrane (4). Finally, this drop in pH inside the vesicle triggers the loading of more dopamine into the vesicles via the VMAT protein (5).
Read the full story.