When a pathogen jumps species, it is often highly lethal in its new host. But a quick kill does not make for continued transmission; the host must survive long enough to pass the pathogen on to additional victims. Thus, under natural conditions, a newly emergent, highly lethal pathogen that kills very rapidly is expected to evolve lower virulence. At the same time, however, the host species is evolving resistance to the infection, which then provides an environment for increasing pathogen virulence. Could humans be creating a similar environment by vaccinating or breeding our farm animals to resist disease?

Wild rabbit populations in Australia declined dramatically in the early 1950s after the release of the myxoma virus, which caused a fatal disease called myxomatosis. Slowly, the populations started to rebound, though they never fully recovered. 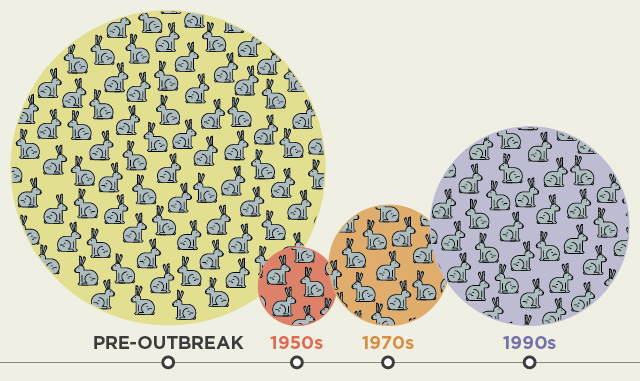 To track the myxoma virus (MYXV) as it devastated the invasive rabbit populations of Australia,... 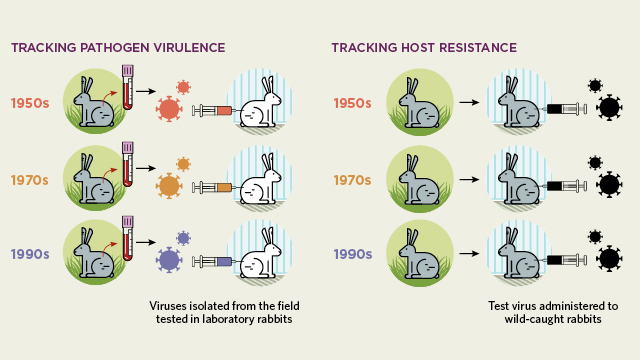 When MYXV first infected the Australian rabbit population in 1950, it caused a severe disease known as myxomatosis that killed more than 99 percent of its victims. Natural selection favored strains with reduced lethality and therefore longer infectious periods. Within a few years, circulating viruses had fatality rates between 95 percent and less than 50 percent.

Meanwhile, the rabbits were evolving resistance to the viral infection, though the protection was not complete, allowing the virus to continue evolving.

Host resistance likely decreased the virus’s transmission rate, thus setting the stage for the selection of more virulent strains. Sometime between the mid-1970s and the early 1980s, strains arose that massively suppressed the cellular inflammatory response of laboratory rabbits. In wild rabbits, the combination of host resistance and increased viral virulence resulted in typical myxomatosis presentation, but when naive rabbits were exposed to the new viral strains, bacterial infections bloomed in their immunosuppressed bodies, killing nearly all of the hosts before they developed the classic disease. 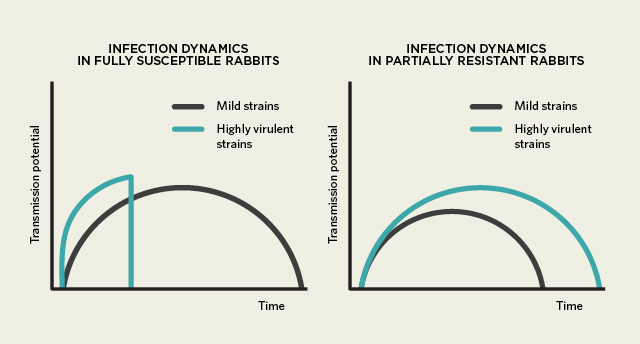