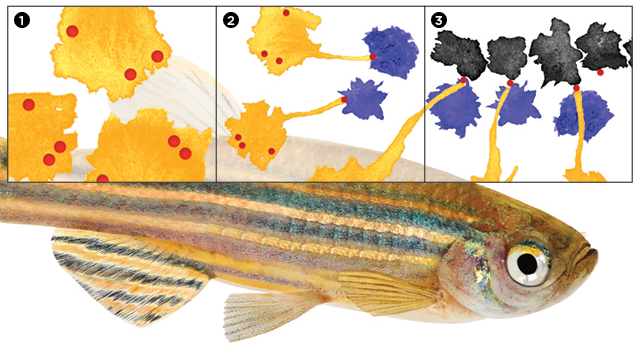 As they mature, zebrafish develop a pattern of black stripes made up of dark pigmented cells called melanophores. Researchers have now shown that organization of the pattern is achieved by the ferrying activity of immune cells called macrophages. First, xanthoblasts (orange)—precursors to yellow pigment cells residing in zebrafish skin—form vesicles (red) filled with signaling molecules at their surface (1). Then, macrophages (blue) pick up these vesicles, which remain attached to xanthoblasts by thin filaments (2). On encountering a melanophore (black), the macrophage deposits its cargo on the surface of the pigment cell (3). This long-distance communication represents an entirely new function for macrophages.