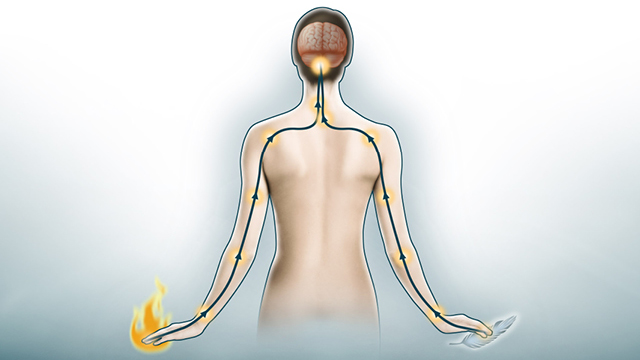 Persistent pain continues even after the damage is resolved, or in some cases, in the absence of an acute injury in the first place. The difference between this and acute pain, also known as nociception, researchers are learning, comes down to the neural mechanisms that trigger these distinct signals in the brain.

Nociception
Acute pain is caused by the activation of nociceptive sensory neurons in the periphery. These neurons trigger the firing of a series of connected somatosensory neurons up the spinal cord and into the brain, transferring information about the intensity and duration of the painful stimulus.

Persistent pain
Pain that persists long after or in the absence of injury can result from the misfiring of the normal nociceptive pathway. This can be triggered in the periphery—sometimes arising from a neutral stimulus, such as light touch—with the signal becoming amplified on its way to the...

Microglia release cytokines and other proinflammatory molecules, as well as detect signaling factors from peripheral immune cells (1). Together, these signals can enhance the release of excitatory neurotransmitters from pain-transmitting neurons, leading to increased neuronal firing (2). Normally, when glial cells called astrocytes detect an increase in the extracellular concentrations of neurotransmitters, their cellular processes called endfeet begin to take up greater amounts of the molecules in an attempt to bring the hyperactive synapses under control (3). In persistent pain, these cells contain fewer of the molecular transporters responsible for this neurotransmitter removal. Glial cytokines and chemokines can also cause greater numbers of receptors to be displayed on the postsynaptic terminal of the pain-transmitting synapse, further promoting neuroexcitability (4). 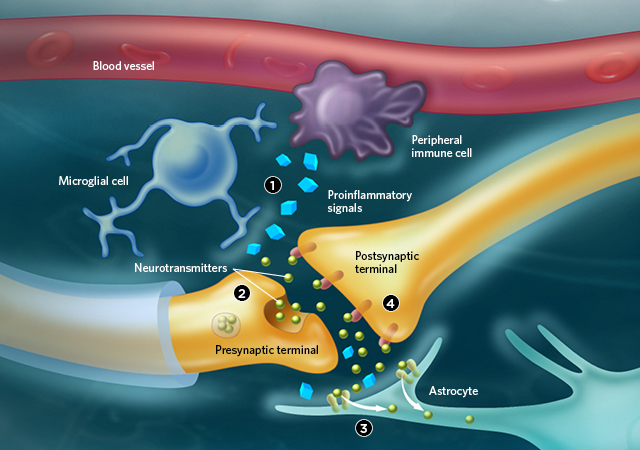