Circular RNAs often form as the pre-mRNA molecule is processed into its final transcript via splicing, in which introns are removed and exons are linked together. Most circular RNAs are thought to be formed by a process called backsplicing, which joins one end of an exon to the other, or to an upstream exon, forming a circle. Researchers have recently published several models—not all of them necessarily mutually exclusive—to explain how different parts of the RNA molecule are brought into close proximity, encouraging backsplicing and turning a linear sequence into circular RNA. 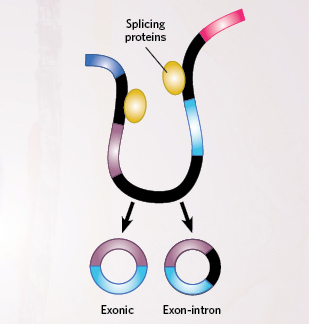 THE SCIENTIST STAFFIn a general backsplicing model, proteins assemble to form the spliceosome that processes transcribed RNA. But instead of splicing exons together in a linear sequence, they join the end of one exon to the beginning of the same exon or to an upstream exon. Below are three mechanisms that can drive this backsplicing