Meiosis in human females takes place over decades. At any point in this process, an incorrect number of chromosomes can be transferred to daughter cells, resulting in aneuploid gametes, the most common cause of miscarriage and the root of certain developmental disorders, such as Down syndrome.

During gestation, primordial germ cells replicate their DNA and pair up homologous chromosomes for homologous recombination. Meiosis is then arrested until ovulation many years later. 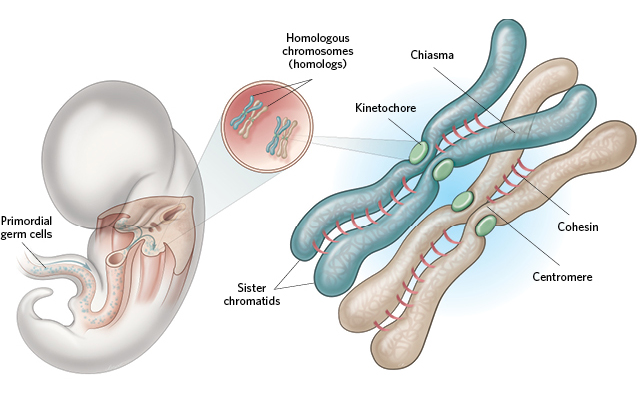 Just before ovulation, the oocyte resumes meiosis, building a meiotic spindle of microtubules to segregate homologous chromosomes. Upon fertilization, the egg undergoes a second round of division, segregating sister chromatids. (These divisions are asymmetrical, resulting in one large oocyte and two or three small polar bodies, shown here as equal size.) 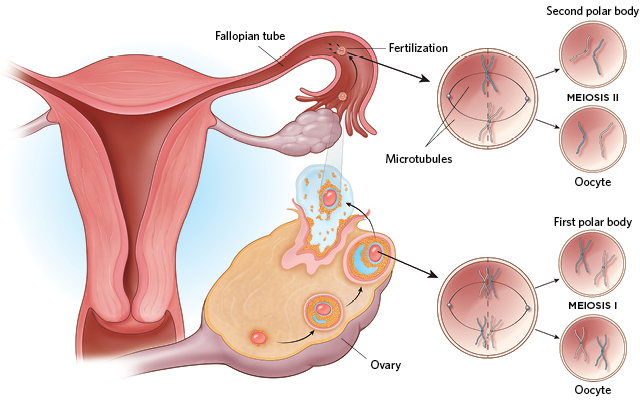 There are multiple ways that the normal process of... 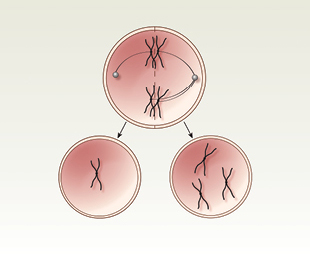 Improper microtubule attachment can lead to the unequal distribution of chromosomes in the oocyte and polar body.© 2016 MICA DURAN 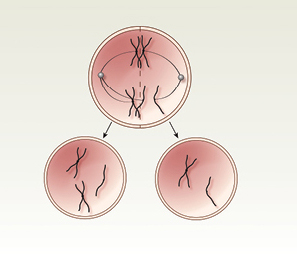 When the cohesin that holds sister chromatids together breaks apart too early, the chromosome halves are subjected to random segregation, often getting separated prematurely.© 2016 MICA DURAN

A third type of misfiring occurs when paired homologs (bivalents) separate prior to the first meiotic cell division. Then, during meiosis I, the cell seems to treat the resulting univalents as it would during meiosis II, with microtubules attaching to the kinetochores on either sister chromatid. While this often results in balanced division, with the two chromatids of each homolog segregating into separate daughter cells, other times both chromatids of one or both univalents can segregate into one daughter cell.© 2016 MICA DURAN