Insects were already masters of the air when birds first took to the wing more than 100 million years ago, and they remain the go-to organisms for scientists interested in the evolution, kinematics, and neuroscience of flight. These days, engineers are designing drones and other biomimetic robots meant to replicate the ways in which insects fly and respond to environmental stimuli such as odors, shapes, and magnetic fields.

Because insects are smaller and speedier than many of their aerial counterparts such as birds and bats, many of the tools used to study these larger animals cannot be feasibly miniaturized for researching insect flight. To navigate these challenges, researchers are getting more creative, aggregating technologies from many different fields—including video gaming, robotics, radar, and even missile guidance systems—to better understand how insects have become such successful fliers.

The difficulties in studying flight

Some larger insects, such as dragonflies and hawk moths, can be fitted with trackers and other equipment to study flight. Huai-Ti Lin, a neural engineer at Imperial College London, has created an ultralight backpack, pictured here, that uses electrodes implanted directly into a dragonfly’s brain to measure its neural activity in real time.
HUAI-TI LIN
Many insects are simply too small to be fitted with a tracker. Instead, researchers use high-speed cameras that can collect several thousand frames per second to study insect flight and behavior. To analyze so much footage, scientists are turning to deep learning neural networks such as DeepLabCut that can be trained to track parts of an insect’s body as it moves.
DEEPLABCUT; DATA FROM LIN ET AL. 2017, DEEPLABCUT

Virtual reality arenas bring the field into the lab

Video gaming technology has made it possible for researchers to mimic field conditions in the lab or to parse an insect’s reality in ways that would never be possible in nature.
SHANNON ALSSON; ANDREW STRAW
Virtual reality allows researchers to replicate realistic stimuli such as trees, fruit, and flowers. Shannon Olsson, a chemical ecologist at the Tata Institute of Fundamental Research in Bangalore, India, combines VR with odor plumes to record how tethered insects such as apple flies, mosquitoes, and moths navigate to virtual landmarks.
SHANNON OLSSON
Recently, neuroscientists at the University of Freiburg designed a virtual reality arena called FreemoVR in which animals can navigate without being tethered. To validate the arena, designer Andrew Straw prompted Drosophila to fly in a figure eight by varying the speed and direction of dots displayed on the arena’s wraparound screen.
STRAWLAB.ORG/FREEMOVR

Dominique Martinez, a neurobiologist at the University of Lorraine in France, began brainstorming how to follow insects in free flight in 2016. The resulting “lab-on-cables'' resembles the Spidercams used to film in sports arenas. A rigid outer frame supports a series of winches and cables that control the position of a small central cube in which an insect flies.
DOMINIQUE MARTINEZ
As the animal buzzes around, a tracking algorithm derived from missile guidance technology analyzes footage from two cameras attached to the cube and uses the information to predict where the insect will fly next, tightening or loosening the cables to keep the insect in the interior cube. A third high-speed camera snaps up to 400 frames per second, allowing researchers to study the detailed kinematics of flight. Here, a long exposure captures the path of the cube following a prerecorded flight path using a small LED light attached to one corner.
DOMINIQUE MARTINEZ 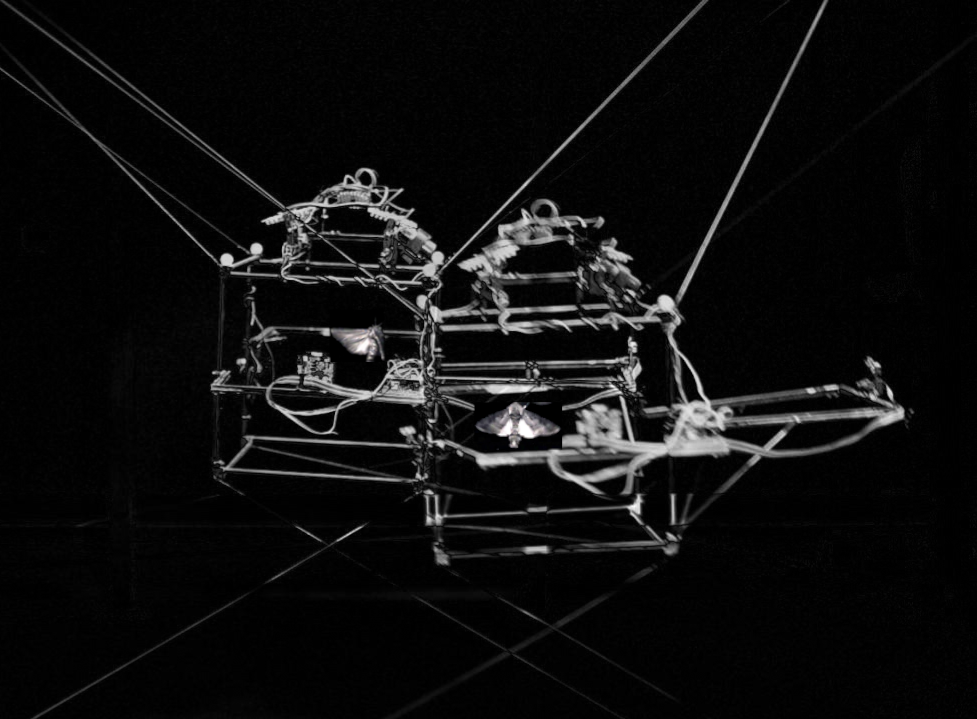 The team validated the lab-on-cables by tracking free flying cutworm moths (Agrotis ipsilon) and was able to show that moths have adapted a type of flight known, described by what’s known as the helicopter model—when flying relatively slowly, moths tend to orient their bodies vertically, leveling out to horizontal as they reach higher velocities.
DOMINIQUE MARTINEZ

While many countries have established radar networks for forecasting weather, their signals often contain information about insects as well. Biometeorologists at the University of Notre Dame are using radar to track the annual emergence of mayflies around Lake Erie, where billions of adults come out of the water each summer in a mating frenzy that lasts for days.
PHIL STEPANIAN

By analyzing radar data over the last five years, scientists have documented a decline in mayfly abundance over more than 80 percent of Lake Erie. Throughout their lives, mayflies are food for many different animals, and the Great Lakes fishing industry indirectly relies on their presence. Researchers attribute mayfly population declines to industrial and agricultural contamination.
PHIL STEPANIAN