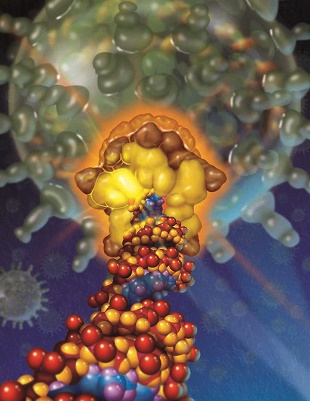 PLOS BIOLOGY, PRECISION GRAPHICS, AATHAVAN AND CHEMLAThe search for alternatives to antibiotics has led many scientists to a treatment practice that’s been on the fringes of modern medicine for nearly a century. Bacteriophages—viruses that infect and kill bacteria—were first used in 1919 to treat a wide range of infections.

Phage therapy fell out of favor with the advent of antibiotics; the practice has only persisted in some European countries as an experimental treatment. However, earlier this year, phage therapy was highlighted as one of seven approaches to “achieving a coordinated and nimble approach to addressing antibacterial resistance threats” in a 2014 status report from the National Institute of Allergy and Infectious Diseases (NIAID).

Classically, the treatment uses a bacteriophage, or cocktail of several phages, to specifically lyse target pathogenic bacteria. Researchers and biotech companies continue to refine this method, but in the absence of clear regulatory and manufacturing...

Still, other scientists have honed in on the bactericidal enzymes or tactics used by phages to identify potential small-molecule antibacterial drugs. And beyond human medicine, phage therapies have been successfully commercialized for use in farms and on food products. Their success—or failure—in these other applications hint at the road ahead for clinical phage therapy.

“All [phages] do is interact with and parasitize the bacteria, so we can learn from them exactly how they do this, and identify a number of different Achilles’ heels of the bacteria,” said microbiologist Raymond Schuch of Rockefeller University in New York City.

Renewed interest in phage therapy is due in part to the growing problems posed by antibiotic overuse in the clinic, which has escalated microbial resistance. But even when antibiotics are overprescribed, most people only receive doses in response to illness.

On farms, however, small amounts of antibiotics are routinely used to promote animal growth or prevent disease outbreaks; the practice has been linked to long-term changes to animals’ commensal microbiomes, increased transfer of antibiotic-resistant bacteria from animals to farmworkers, and potential risks to human health. Recent governmental initiatives to curb antibiotic use have largely overlooked their use on farms. But a small number of phage-based alternatives are now available from Maryland-based biotech Intralytix, which manufactures sprays that target Listeria, Salmonella, and E. coli O157:H7 in foods and food-processing facilities.

“To get phages approved for food safety uses wasn’t actually very difficult,” said Gill, who is not involved with the company. “Maybe the regulatory issues [with clinical use] won’t be as big a hurdle as we think but it’s not something we know much about right now.”

Scientific clarity—understanding why and how to design phage treatments—is a higher priority, according to Gill. In a 2006 Antimicrobial Agents and Chemotherapy study, he and his colleagues attempted to use phages to treat bovine mastitis caused by Staphylococcus aureus, a growing concern in the dairy industry. However, only 16 percent of cows treated were cured. High phage concentrations in milk up to 36 hours after treatment also suggested that the virus was being inactivated or destroyed within the gland. “Not every bacterial infection is going to be equally successfully treated with phage therapy,” said Gill.

The work highlights one of its many quirks: viruses that look like efficient killers in experiments can fail to cure an infection in the field. Phages may work better at targeting subsets of infections, such as on the skin or deep within organs. Even when bacteriophage therapy is successful, scientists know little about the underlying mechanisms.

“We don’t have a good feel for how phage and bacteria interact within a host to know for sure why one phage [might] work better than the other,” said Gill. “As we move on, we’ll find that some pathogens and some infections respond well to phage therapy and others don’t.”

Ear and lung infections caused by S. aureus or Pseudomonas aeruginosa, a major concern for cystic fibrosis patients, may be viable targets for clinical phage therapy, according to results from early Phase 1 and 2 clinical trials. In a 2009 Clinical Otolaryngology study, researchers treated 24 patients suffering chronic middle-ear infections caused by antibiotic-resistant P. aeruginosa with Biophage-PA, a mixture of six phages, and found significant improvement compared to a placebo.

Another pulmonary pathogen, Burkholderia cenocepacia, was successfully targeted by phage in a mouse model of lung disease. The results, published in a 2010 paper in The Journal of Infectious Diseases by Gill and his colleagues, found that in this case, administering phages intraperitoneally treated the disease better than an intranasal spray.

Bone wounds and prosthetic infections, where bacterial biofilms can fester, are another attractive target for potential phage therapy, according to pathologist Catherine Loc-Carillo at the University of Utah. Osteomyelitis caused by drug-resistant bacteria, among other diseases “where we are almost out of antibiotic options are the highest priority [for phage therapy],” she said.

In an alternative approach, other researchers are trying to derive broad-spectrum molecules by understanding how phages kill their hosts. In a 2013 PLOS ONE study, Rockefeller University researchers identified how phage lysins killed Bacillus anthracis by targeting an enzyme essential to cell wall formation in the pathogenic bacteria. They then identified a small-molecule inhibitor that mimicked the interaction of the phage with its host. Found effective against several Gram positive pathogens, the molecule, Otsuka Pharmaceutical’s Epimerox, is currently being tested as a potential therapeutic.

“We learned how phage lysins kill the bacteria and came up with a way [to mimic that],” said Schuch, who coauthored the study. “We exploited the interaction that takes place between the bacteria and the phage to identify a new target for bacterial drug development.”

Both strategies—using small-molecule phage mimics and mixing up cocktails of viral particles—are being employed by biotech firms hoping to commercialize the treatments. For example, Richmond, Virginia-based AmpliPhi reported preclinical studies for phages targeting at least three kinds of bacteria in 2012 and 2013, while Bangalore, India-based GangaGen is conducting Phase 2 clinical trials to decolonize nasal S. aureus using its StaphTAME.

However, until both manufacturing and regulatory processes are more clearly defined, the near-term future of phage therapy is likely to be in “personalized, sort of boutique experimental treatments”—where traditional therapies have failed—Loc-Carillo explained.

Early attempts at phage therapy were conducted in an enthusiastic time, when little was understood about the viruses themselves. “Bacteriophage therapy will have its day again,” said Loc-Carillo. “It sort of had one, before antibiotics came along, but it wasn’t well understood then. Now, scientists are more intrigued by the complexity of it than just falling in love with an idea.”