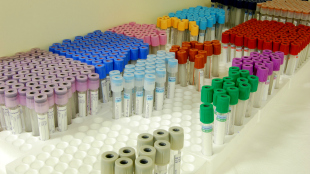 WIKIMEDIA, GOLDMUND100About four years ago, Jay Tischfield, the director of RUCDR Infinite Biologics, a long-standing biorepository at Rutgers University, found himself sitting on a gold mine. RUCDR had recently gotten into the business of banking induced pluripotent stem cell (iPSC) lines as part of an initiative through the National Institute of Mental Health (NIMH). This was still early days in iPSC derivation, a few years after the pioneers of the field had figured out how to turn skin cells into pluripotent cells.

But not long into this new endeavor, “something important happened in the field,” Tischfield recalled. Researchers reported for the first time that they could induce pluripotency from blood cells. It just so happened that RUCDR was in possession of a massive collection of blood cell lines, each with a heap of information on the donor. “There we were, standing on what is perhaps one of the...

All of these non-transformed small lymphocytes had been cryopreserved as back-ups for transformed cell lines. “And it turned out these were fantastic for making iPSCs,” said Tischfield. “We could make iPSCs with about a 95 percent efficiency.” Suddenly, the opportunities for iPSC derivation and banking seemed endless.

The question, of course, is how to pick and choose which lines to derive iPSCs from. To bank them all would be unfeasible, let alone uneconomical. “What you don’t want to have happen is liquid nitrogen tanks filled with cells nobody wants,” explained Michael Sheldon, the director of stem cell laboratories at RUCDR. “You might as well take dollar bills and flush them down the toilet.”

As a growing number of iPSC banks begin to come online, they’re facing many of the same questions. Chief among them: Which cells will be good for business?

It was the work of Nobel Laureate Shinya Yamanaka and colleagues nearly a decade ago that introduced the world to a new kind of stem cell, iPSCs. Although a seemingly simple protocol, deriving iPSCs and then maintaining and storing them can be a burden. The idea behind an iPSC bank is that the repository does all the labor and quality assurance (QA) assays and distributes cells to researchers for a fee.

The National Institutes of Health’s Center for Regenerative Medicine, then led by Mahendra Rao, launched an iPSC banking initiative about three years ago. Rao’s vision was to have biorepositories participate in the storage and distribution of lines that would be deposited by NIH-funded researchers, a model he referred to as a “crowdsourcing.”

“It’s actually worked quite well,” said Rao, who left his post earlier this year and is now the vice president for regenerative medicine at the New York Stem Cell Foundation (NYSCF). “If you look worldwide, the largest number of lines that have been distributed have been from the U.S., from these nonprofit registries at which NIH has taken a leadership role in depositing the lines.”

Other iPSC banks also invite researchers to deposit their lines for storage and distribution. In just the past year or so, the number of iPSC lines has exploded. “I would say in the existing repositories there are already 200, 250 lines,” Rao said. “Within the next year or so, that number should quadruple. And in the next five years, there should be 10,000 or 20,000 lines.”

RUCDR and the NYSCF are just two of a number of institutions working toward this goal of banking these cell lines. The Coriell Institute in Camden, New Jersey, for instance, offers dozens of iPSC lines related to Parkinson’s, amyotrophic lateral sclerosis (ALS), and Huntington’s disease. WiCell in Madison, Wisconsin, also banks and distributes a growing number of iPSC lines (it has 18 available to order online so far). The Harvard Stem Cell Institute offers derivation services for researchers desiring custom-made iPSCs in addition to distribution of its 22 banked control and ALS lines.

In Europe, the European Bank for Induced Pluripotent Stem Cells, which launched this year, aims to have 1,000 cell lines available by 2016; HipSci, based in the U.K., plans to derive iPSC lines from 500 healthy individuals and 500 individuals with genetic diseases; and StemBANCC has a goal of producing lines from 500 people in five years. (See Ruth McKernan and Fiona Watt’s more complete list of iPSC banking initiatives, published in Nature Biotechnology, November 2013.)

Although there may be some overlap, each iPSC banking program tends to serve a particular niche in the marketplace. Martin Graf is the head of the stem cell platform at Roche and he coordinates the StemBANCC effort, which includes 33 academic and industry partners. The focus is on a number of neural diseases, including Parkinson’s disease, bipolar disorder, autism, and migraine, as well as on patients who show adverse side effects to drugs and may aid toxicology studies. “We always start in every disease category first with well-known, monogenic disease,” said Graf, “and only after that we also recruit idiopathic disease.”

The California Institute for Regenerative Medicine (CIRM) has the ambitious goal of creating the world’s largest iPSC bank. This will include cell lines from people with cardiomyopathy, blinding eye diseases, and Alzheimer’s, among other things. Michael Yaffe, the associate director for research activities at CIRM, said it was important not to duplicate the efforts of other iPSC banking initiatives. In planning the program, Yaffe explained, “we wanted to make as many [cell lines] as possible. Then it became an economic argument: How many could we afford and how much could we push a deriver to handle?”

CIRM settled on a goal of 9,000 lines derived from 3,000 individuals. Yaffe said he anticipates that the first of these will be available for distribution by the end of the year or early 2015. What’s still unsettled, however, is the cost. It’s a tricky calculation, given that the utilization of the lines is unknown.

“If a few large pharmaceutical companies buy a complete set of all the lines, that would keep the bank established and running for many years,” Yaffe said. “If academic researchers are going to buy a few lines at a time or a few lines each, it will create some challenges for the sustainability of the bank.”

The price tag at iPSC banks ranges from as low as $200 per line to up to about $1,500. Costs vary depending on how many QA assays a researcher requests and whether she is an industry or academic customer (there’s typically a discount for the latter). In most cases, the banks aren’t looking to iPSC lines as profit-generators, but as resources that will hopefully sustain themselves through user fees. “The economic models are really hard to deal with,” said Sheldon at RUCDR. Banks have to project which cell lines will be worth expanding and how many assays should be done up front.

It remains to be seen which lines—and banks—will be the most popular and economically successful. Sheldon said the control lines deposited from the NIH’s Center for Regenerative Medicine are getting quite a bit of use—40 recipients over the past year—and that he anticipates demand will increase as more researchers choose iPSCs.

For now, banks are primarily focused on iPSCs to be used in basic research, disease modeling, and drug screening, rather than for drug development. But therapeutic-grade banks are likely to come next.

The first clinical trial using iPSCs was approved last year in Japan to treat patients who have age-related macular degeneration with autologous iPSCs. Such iPSC-based therapies could get more traction if ready-made cell lines are more widely available, according to Ian Wilmut, a professor emeritus at the MRC Centre for Regenerative Medicine at the University of Edinburgh. “If you go to patient-specific cells, people think it would be so expensive and so slow,” he said. As with other tissue repositories, banked iPSC lines for human treatments would benefit from including a wide variety of human leukocyte antigen (HLA) genotypes to get as close an immune match as possible.

“The advantage of an HLA bank is you can pre-manufacture it, so it’s an off-the-shelf [therapy],” said Emile Nuwaysir, the chief operating officer of the Madison, Wisconsin-based company Cellular Dynamics International (CDI). “It’s not a complete match, you may still require immune suppression. You can think of it, conceptually, as a step toward a fully personalized therapy.”

CDI, which is also the deriver of the iPSC lines for the CIRM initiative, is leading the way toward a therapeutic-grade iPSC bank. The first stage, which is currently in progress, is to bank cell lines from donors who have the five most common HLA genotypes in North America. Nuwaysir explained that to have a match available for 95 percent of the population at two predominant HLA loci, a bank would need 200 lines. A three-allele match would require 900 cell lines. Both are feasible, he said. “Neither of those numbers scare us.”

“The wild card is the regulators,” said Rao. He pointed out that the minute these cells undergo any sort of processing, they’re subject to US Food and Drug Administration (FDA) regulation. “Now, if you’re going to differentiate them into neurons, the FDA is going to say, ‘Where are the clinical trials?’” said Rao. “Who’s going to take charge of getting those data?”

For their part, regulators, too, are working on how to handle stem-cell therapies. Wilmut is part of an international group of stem-cell leaders working on getting regulatory uniformity across countries so that banked, therapeutic iPSC lines could be distributed worldwide. He said it’s important to get a consensus on regulations and quality criteria now, before companies move ahead with developing therapies. And it’s clear from the progress over the last eight years—from the initial demonstration of iPSC derivation to the first clinical trials in humans—that the field is moving at the speed of light.

“The return for it potentially, for anybody, is huge,” said Wilmut. “And this is why we would think it’s well worth making the effort, and now is the time.”