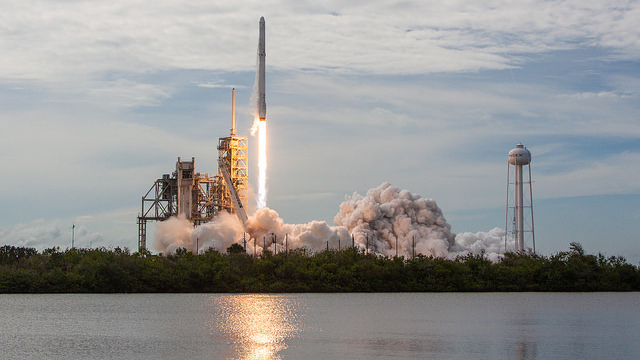 A SpaceX Falcon 9 rocket lifted off from NASA’s Kennedy Space Center in Florida on June 3, carrying the Dragon resupply spacecraft on SpaceX’s eleventh Commercial Resupply Services mission to the International Space Station.FLICKR, SPACEXLast month, more than 4,000 fruit fly eggs and adults began the summer vacation of their short lives. Riding in vials inside six tissue box–size containers, the flies were loaded onto a SpaceX Dragon spacecraft and launched out of the Earth’s atmosphere, headed for the International Space Station (ISS). They spent a month orbiting Earth before returning in the Dragon and splashing down into the Pacific Ocean off the coast of Baja California, Mexico, where they were collected by barge and rushed to the lab of Karen Ocorr at Sanford Burnham Prebys Medical Discovery Institute (SBP) in San Diego, California. 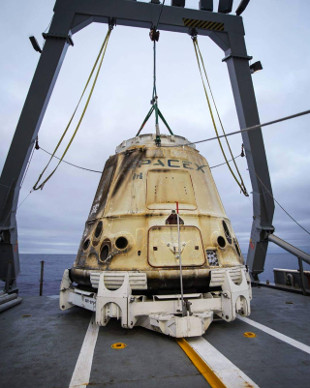 The SpaceX Dragon cargo craft splashed down in the Pacific Ocean on the morning of July 3.NASA, SPACEXThe researchers face three more long weeks of data collection from the control flies and the progeny of the returned flies, not to mention the time and effort necessary to make sense of it all. But the labor and cost—about $40,000 per box of flies just to send them into space and bring them back—are worth it for Ocorr and her collaborators at SBP and the NASA Ames Research Center. The goal of the project, called Fruit Fly Lab-02, is to study the effects of microgravity on fly cardiac development, gene expression, and function.

“The fruit fly heart is remarkably similar in many respects to the human heart,” says Ocorr. Fruit flies also have the advantage of being small—essential for getting large numbers of them onto the ISS where space is at a premium—and having a short lifespan, she explains. Scientists already know that astronauts who spend months in space experience some cardiac atrophy. But because the living, middle-aged flies that just came back from the ISS were born and spent about half their lives in microgravity, their hearts could offer clues as to how travel to and living on Mars will affect the human heart.

Ocorr’s collaborators also collected data about the flies’ microbiomes and will perform proteomics studies on their muscle tissue. Exploring heart and muscle function in the flies could also help researchers better understand the molecular changes in someone’s body when they’re bedridden and their muscles atrophy. “We’re trying to maximize the information that is going to come out of these flies,” says Ocorr. “We don’t want anything to go to waste.”

Ocorr is part of a growing group of biologists taking advantage of programs and funding offered by NASA, in collaboration with the European Space Agency, the Japan Aerospace Exploration Agency, the Russian Federal Space Agency, and some private companies, to do research in space.

“NASA looks at space biology in two different dimensions: one is as a tool to help understand the issues around long duration space flight in human health and performance, and the other is as a basic science, looking to see how organisms respond to microgravity and [investigating] the basis of the response to gravity on Earth,” says Bradley Carpenter, chief scientist for the Space Life and Physical Sciences Research and Applications Division at NASA. The organization’s Space Biology Program has invited grant applications from basic scientists nearly every year since 2008.

Plant biologist John Kiss of the University of North Carolina, Greensboro, considers himself fortunate to have received some of that funding. Kiss has sent eight experiments into space since his postdoctoral fellowship at Ohio State University was funded by NASA in 1987. His most recent project, called Seedling Growth-3, explores how gravity affects light sensing, as well as growth, development, and gene expression in Arabidopsis thaliana seedlings. Understanding how plants respond to changes in gravity is important when thinking about including vegetation on long-range space flights or in colonies on Mars, he says, where they could be a valuable food source and help purify air and water.

The Arabidopsis seedlings were cultivated from seeds that went up in the same Dragon spacecraft as Ocorr’s fruit flies. Seedling Growth-3 differs from Fruit Fly Lab-02 in that it requires more involvement from the astronauts manning the ISS, however. Kiss and his collaborators in Spain developed extremely detailed procedures for them to follow: for two experimental runs, astronauts loaded seeds into special containers for growing, then froze and fixed the seedlings after six days. Everything else was automated, including capturing seedling photographs that were transmitted to a server on the ground in close to real time.

Despite the minimal involvement of the crew, the experiment required years of planning via conference calls involving upwards of 20 people from all over the world. And once the plants came back to Earth with Ocorr’s fruit flies, Kiss’s collaborators faced another logistical hurdle: collecting the biological material at NASA Ames Research Center and bringing it back to their lab in Spain as quickly as possible.

Experiments on the ISS explore the effects of environmental conditions other than gravity, too. Tufts University biologist Michael Levin and colleagues sent planaria (Dugesia japonica) to the ISS for about 29 days in early 2015. “It’s not just a gravity lab. When they’re up there, they’re also out of the Earth’s geomagnetic field,” Levin says. “There’s a lot of interesting work showing that animals and plants need the Earth’s geomagnetic field for proper function, and nobody knows why.”

The study, which was published in Regeneration this April, explored the effects of microgravity and micro-geomagnetic fields on the worms’ physiology and regenerative capacity, with the larger aim of understanding how complex patterns form. “This isn’t only about space,” says Levin. “Understanding how [pattern formation] works is really important for everything from birth defects to regenerative repair to cancer.”

Getting planaria up to the ISS required careful planning. Worms were shipped to the Kennedy Space Center in Florida in battery-powered, refrigerated containers. In order to minimize the time between amputation and liftoff, the 15 animals earmarked for regeneration experiments were cut into three pieces—head, pharynx, and tail—just 31 hours prior to the launch. The timing and logistics of loading the Dragon spacecraft meant that achieving a shorter delay was impossible.

The authors observed striking changes when the planarians returned. Worms that had experienced space were much more willing than their Earth-bound siblings to be in a well-lit part of a petri dish. The space-traveled worms’ microbiome profiles also differed from controls.  To the researchers’ surprise, one pharynx fragment regrew two heads, instead of a head and tail. “It doesn’t sound like much because it’s one worm, but planarian regeneration [has] incredibly high fidelity, so under normal conditions they never ever make a mistake like this,” explains Levin.

An amputated flatworm fragment sent to space regenerated into a double-headed worm, a rare spontaneous occurrence.JUNJI MOROKUMA, ALLEN DISCOVERY CENTER AT TUFTS UNIVERSITY“These animals have been back on Earth for almost two years in their normal environment, and still all of these things” are true, says Levin. “Their behavior is now different, their patterning is different, and their microbiome is different. The planarian body turns over every 30 days or so because their [stem cells] and bodies continuously regenerate, [so] this long-term effect of that brief experience in space is just remarkable.”

Such intriguing results have Levin eager to develop other projects destined for space. “We’d love to do more,” he says. “We have a whole program in mind, but it’s a matter of logistics, and the cost, too, is extremely expensive.”

Levin’s eagerness is echoed by both Ocorr and Kiss. “Our hope is that we’ll get another shot at testing the information we get from this particular flight,” says Ocorr.

“What we’re doing is really unique in the world, to use microgravity as a research tool and make some interesting fundamental discoveries,” says Kiss. “I relish the opportunity.”