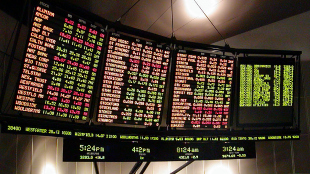 WIKIMEDIA, KLIP GAMEEarly in 2012, executives at Chimerix, an antiviral developer based in Durham, NC, decided that the company was ready to move to the next level. Successful Phase 2 results from its lead drug candidate, CMX001, had the firm starting down the path to developing a clinical efficacy trial. “We were facing a moment in time where we needed to raise somewhere between $80 million and $100 million to run a Phase 3 trial,” said Kenneth Moch, the company’s CEO. Although Chimerix had already raised around $160 million during the last decade—between venture capital and government grants—funds to support Phase 3 studies are not easy to come by. The public markets, however, could offer a much larger pool of capital to dip into.

This April, Chimerix announced it was going public at an initial offering of $14 per share. Initial public offerings (IPOs) are no small feat,...

A number of factors have contributed to this current wave of biotech IPOs. Emily Mendel, a spokesperson for the National Venture Capital Association (NVCA), said part of the reason is that the pipeline has simply been backing up over the last few years. “Companies have not been comfortable going out. . . . There was a lot of market uncertainty, and they might have been waiting for the right time,” she said. “And I think the right time has come.”

The Jumpstart Our Business Startups (JOBS) Act also helped some firms prepare to break out. President Obama signed the legislation into law in April 2012. It is no coincidence that Tetraphase, a Watertown, MA-based antibiotic company, was beginning its preparations for an IPO at that same time. The company began meeting with investors as part of a process called “testing the waters,” which is used to gauge interest before a company makes its offering. Tetraphase took advantage of a provision in the JOBS Act that let the company test the waters confidentially, rather than having to lay out potentially proprietary information for all the public to view. David Lubner, the chief financial officer of Tetraphase, said his group held close to 60 meetings with investors between April 2012 and February 2013, when the company made its first open filing. “That confidential cover gave us confidence in making sure we would have a successful IPO,” Lubner said.

“The JOBS Act provided a safe harbor under which companies could talk to investors, educate them, and get feedback about whether the company was attractive to those investors,” said Moch, who added that the law was a critical aspect of Chimerix’s ability to go public. Another part of the law also helped ease the financial burden of an IPO. Ordinarily, Moch explained, all companies had to hire a second auditor to double-check their first audits. It would have cost Chimerix an extra $100,000 or so per year to hire a second firm to fact-check Ernst & Young, which it had already been paying around $300,000 annually for auditing services. The JOBS Act did away with the second audit requirement for some smaller companies. “That's two scientists [we could hire],” Moch said.

Enanta Pharmaceuticals, another Watertown-based company, which went public in March, also took advantage of the JOBS Act to “take the temperature” of investors, said its CEO, Jay Luly. “We were certainly prepared if we didn’t feel that the market wasn’t there that we wouldn’t go out,” he said. But instead, they found a receptive audience among public investors. “Since then, the markets have been increasingly receptive and more and more companies have gone out,” Luly added.

The successes of larger, already public biotech companies helped pave the way for smaller firms trying to burst onto the scene. Evnin cited Gilead and Biogen Idec as recent success stories of established companies whose stocks have done very well, and that have likely steered investors back toward biotech. “Once people own what they want to own of those, then where do they go next? . . . They’ll say, ‘Hey, this space looks pretty interesting, look how much money I’ve already made, maybe I should do more.’”

What’s perhaps more striking than the number of biotech IPOs this year are the types of companies that are coming out, said Brenda Gavin, a founding partner of Quaker Partners. In the past, “they were companies that already had marketed products or were very close to having marketed products,” she said. “Now we’re seeing things go out that are pretty Star Wars-y.” In other words, the firms’ products and services are further from approval. And the typical investor’s “risk appetite is higher than it has been in the last several years,” said Alan Eisenberg, the executive vice president of emerging companies and business development at the Biotechnology Industry Organization. “That is important because it signals a general willingness to invest in [biotech] companies.”

Eisenberg said that the recent wave of biotech IPOs is “fundamentally, a positive thing.” Not only do companies have a deeper pool of capital to tap once they go public, but their initial funders can finally earn returns on their investments. “That’s been a problem over the last decade,” Eisenberg said. The hope is that if—and it is a big if—the biotech IPO party continues and venture firms keep reaping in returns, money will start to move toward early-stage companies. It’s an optimistic view, and Evnin said a sustained performance among newly public biotechs will be required to whet the appetite of the institutional investors who provide the funds for life science venture capital. “A one-year surge is not going to bring them back in large scale,” he said.

While many in the industry agree that having a friendly IPO market is positive for biotech companies, others are cautious that over-exuberance among investors could backfire. David Grainger, a partner at Index Ventures in London, said one worry is that investors might become irrationally excited about biotech companies. “In some cases, there may be examples of companies that succeed in getting an IPO done that perhaps wouldn’t have done were it not for that bubble-like herd behavior [of investors]. And if those companies then crash . . . then there’s a danger we will flip from the current headlong rush back into the bust state,” he said.

Grainger does see an upside to the stampede of IPOs this year. Scientists who have been sitting on good ideas might be inspired to develop them into businesses. And it’s good news for existing companies, too, said Mendel at the NVCA. “A vibrant IPO market is a good thing for any venture capital-backed company because it is a message that these companies have options,” she said. “If you’re a biotech company and you’re thinking of going public, the waters are safe to do so.”