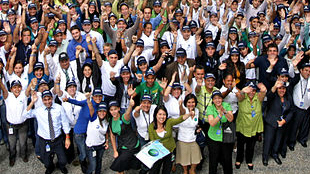 Investors on this side of the Atlantic have only been able to watch as their French counterparts joined the crowdfunding party. In the U.S., equity-based crowdfunding—in which those who offer up money act as investors—is only slowing unfolding, thanks in part to the JOBS Act passed in 2012. Until now, crowdfunding has been limited to donation-based financing (think Kickstarter or Indiegogo), in which the funds can’t buy a monetary...

The JOBS Act—or Jumpstart Our Business Startups—opened the door for U.S. companies to take advantage of equity-based crowdfunding. In the fall of 2013, the Securities and Exchange Commission (SEC) rolled out proposed regulations on how these opportunities could take shape through online portals similar to WiSeed. The public comment period on these regulations ended earlier this month. If finalized, the regulations would, for the first time, allow private companies to reach out to the crowd for investments and tap into a potentially massive pool of wealth just waiting for the right pitch to come along—a possibility that’s particularly appealing to small, cash-strapped biotech startups.

“There’s a lot of talking in all biotech circles about crowdfunding,” said Lorenzo Pellegrini, a venture capitalist with Care Capital in Princeton, New Jersey. The biotech industry could benefit substantially from expanded crowdfunding opportunities. For one, early-stage firms often struggle to attract investors. “The challenge for young entrepreneurs is funding is terrifically hard, harder than it ever has been,” said Barbara Nelsen, whose consulting firm, Nelsen Biomedical, helps companies with their business and financing strategies. Additionally, donor-based crowdfunding sites have typically had success supporting consumer products and services, rather than the esoteric and complex work of biotechnology firms.

Equity-based crowdfunding websites are starting to come online, and several are targeting the life sciences. The financial firm Poliwogg, for instance, has a dozen life science companies listed for crowdfunding investments “and scores more that we’re reviewing,” said the firm’s CEO, Gregory Simon. Poliwogg’s participating companies are looking to raise between $1 million and $4 million, minimum.

Like other crowdfunding sites that look for investors as opposed to donors, Poliwogg limits its crowd participants to accredited investors—those who can prove they have deep pockets. According to SEC rules, any company that receives financing from non-accredited investors will be limited to raising just $1 million per year. “One million dollars might be helpful to get you started, but pretty much any company needs a whole lot more than [that],” Simon said.

Simon expects that the crowdfunding rules will eventually change to lift the limit on non-accredited investors, enabling companies to raise more than $1 million a year from them. “There’s just no reason to limit what somebody can invest in a private company working on a Parkinson’s drug and not limit what they spend at a casino,” he said.

For some, crowdfunding is more about the crowd and less about the money. QuantuMDx, a UK biotech firm that is developing a handheld device to diagnose malaria, launched an Indiegogo campaign this week (February 12). The goal is to raise $50,000 in 47 days to fund a trial to test the device in the field. That amount seems miniscule compared to the $22 million QuantuMDx has already raised from other funders. “For us, crowdfunding this has a lot to do with raising our profile around the world,” said Elaine Warburton, the CEO and cofounder of QuantuMDx.

“For life sciences, I really like the idea of donation-based crowdfunding, because it allows people who might be doing charitable giving to put money into something they may feel will realize some true value more quickly or in a more focused fashion for something that’s pertinent to their life,” said Nelsen. And even small amounts of money raised from donations can help a startup appeal to serious investors.

Warburton said her group had considered going the route of equity-based crowdfunding, but was turned off by the administrative requirements. “The sheer volume of paperwork is daunting,” she said. “It [would] cost more to manage it.”

“This is where crowdfunding starts to go a little bit awry,” said Krist Werling, a partner at the law firm McDermott Will & Emery. Paperwork is one of the biggest drawbacks to the current equity-based crowdfunding situation, he explained. “Unfortunately, the JOBS Act and the proposed regulations put a pretty high burden on small companies for what information needs to be disclosed.” For companies looking to raise $1 million from non-accredited investors, for instance, the disclosure requirements might be prohibitively burdensome, he said.

In Werling’s opinion, the SEC ought to relax some of the filing requirements and let investors take a little more risk. Of course, on the other hand, the agency must protect investors from scams. “There is some skepticism about the applicability of crowdfunding to biotech financing, driven by notion that biotech is very difficult to understand, and it’s where snake oil vendors could hide,” said Pellegrini.

But if done right, he said, crowdfunding could be a game-changer for US biotech firms. “[Crowdfunding] could be the thing that really solves some of the problems that we’re seeing in biotech financing, or it could be a complete flop,” he says. “It will all come down to how much money you could raise through this vehicle.”

Correction: Barbara Nelsen's and Lorenzo Pellegrini's names were misspelled in the original version of this article. The Scientist regrets the error.