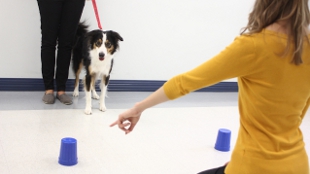 JINGZHI TANDogs have a unique sense of humans. They seem to understand people in a way no other animal does, accurately interpreting gestures, expressions, and even words. What’s more, they then use that knowledge to their advantage—like sneaking forbidden food when people in the room have their backs turned or eyes closed. But do dogs really get humans?

“There are folks that think that dogs understand the whole set of mental states,” said comparative developmental psychologist David Buttelmann of Universität Erfurt in Germany. “I myself belong to the group of people who think that all that dogs do is follow commands. Wolves were not domesticated in order to understand us—to understand our intentions and goals and think about what we are saying. They were just domesticated for following our commands, [and] the ones who did the best were the ones who were allowed to reproduce.”

But does the fact that dogs respond in a sensible way to human gestures mean that they understand the intentions behind them? In 2011, Kaminski and her colleagues showed that when a person did not first make eye contact with them, dogs did not follow a human’s point, suggesting that dogs interpret the pointing gesture as a command. “When the pointing gesture is not directed at them but directed at another person, even though the gesture itself doesn’t change, then they tend to ignore it,” said Kaminski. Children, on the other hand, will still take note of gestural cues even when the signaler’s attention is focused elsewhere, suggesting they understand that the point still contains usable information.

In another study, dogs followed the experimenter’s point to an empty bowl, rather than going for another bowl filled with fragrant food. “This made me think [that] they just follow the point,” said Buttelmann—that the dogs were not interpreting her point as an informative cue to direct them to food. Other research has demonstrated that over repeated trials, dogs tend to improve in their use of human gestures. Some have argued that such learning suggests dogs do not comprehend the meaning behind such gestures.

But Brian Hare, director of the Duke Canine Cognition Center at Duke University and coauthor of The Genius of Dogs, does not believe that these studies rule out dogs’ understanding of human intention. “If a child learns to do math, do you then conclude that it doesn’t understand math?” he asked. Hare suggests that dogs may resemble human babies in their abilities to interpret human gestures in a flexible way—something even highly intelligent great apes seem to struggle with.

Beyond pointing, dogs also appear to use the direction of human gaze and the placement of physical markers to find hidden food and objects, tasks that apes also struggle with. And earlier this year, Buttelmann and his colleague Michael Tomasello from the Max Planck Institute for Evolutionary Anthropology in Leipzig, Germany, found that dogs seemed to interpret human emotional expressions. In their study, an experimenter would open two boxes, looking at the dog after each with one of three expressions: smiling broadly, neutral face, or making a face of disgust. Though the dogs seemed to have trouble distinguishing happy or disgust expressions from the neutral one, when one box brought the person happiness and the other disgust, the dogs preferred the happy box.

“I was surprised by our findings,” Buttelmann said. “I wouldn’t have expected [the dogs] to understand emotional expressions, because that’s not really a command you’re giving them.”

That’s not to say that there isn’t a simple explanation for dogs’ seemingly human-like ability to understand our communicative signals. “Maybe it just on the surface looks similar,” said Hare.  “I think it’s entirely plausible that’s there’s a really simple set of mechanisms that explain what dogs are doing that doesn’t require them thinking about your intentions.” Buttelmann agreed: “It’s not clear yet what’s the right answer.”

Regardless of dogs’ understanding of the intentions behind human communications, their level of social cognition is undoubtedly among the most advanced ever studied. “Through domestication, somehow, it seems the cognitive abilities of dogs might have evolved in a close link to the cooperative nature of the interaction that dogs have with humans, which is rather different than any other animals,” said comparative cognition researcher Ljerka Ostoji? of the University of Cambridge. “They’re kind of unique in the nonhuman animal kingdom.”