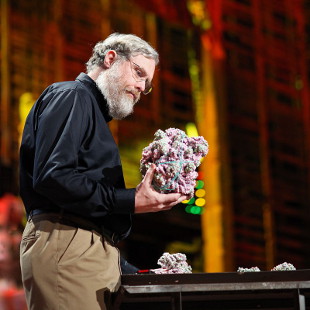 George Church in 2010WIKIMEDIA, STEVE JURVETSONJennifer Doudna, Emmanuelle Charpentier, and Feng Zhang are widely cited as the primary developers of CRISPR/Cas9 technology. These researchers were undoubtedly key to the development of the bacterial immune defense system into a powerful and accessible gene-editing tool, but by assigning credit to just three individuals, most news reports overlook the contributions of countless other scientists, including George Church, who alerted The Scientist to this issue after reading an article on December’s Human Gene Editing Summit.

In the article, my colleague Jef Akst highlighted Doudna, Charpentier, and Zhang as the three seminal figures in the development of CRISPR/Cas9 technology: “The attendees are a veritable who’s who of genome editing: Jennifer Doudna of the University of California, Berkeley, Emmanuelle Charpentier of Max Planck Institute for Infection Biology, and Feng Zhang of the Broad Institute of MIT and Harvard—the three discoverers of the CRISPR-Cas9 system’s...

“I’m trying not to complain,” Church told me when we chatted a few days later. “I’m just making what I thought was a little technical correction, which was the particular way she phrased it.” His point? He and many other scientists also contributed to developing the “CRISPR-Cas9 system’s utility in gene editing.”

If you’ve read anything about CRISPR, you’re likely familiar with the following: in a 2012 Science paper, Doudna, Charpentier, and their colleagues published the first account of programming the CRISPR/Cas9 system to precisely cut naked plasmid and double-stranded DNA. Zhang and his colleagues applied this precision-cutting approach to mouse and human cells in vitro, publishing their results in a February 2013 issue of Science.

But, as is the case whenever intensive scientific inquiry in involved, the story was not nearly so simple. Although it’s not often included with the aforementioned studies, Church’s team published a similar study—using CRISPR/Cas9 to edit genes in human stem cells—in the same issue of Science as Zhang and his colleagues.

Church emphasized that Doudna and Charpentier were major players in elevating CRISPR/Cas9, a naturally occurring form of immune defense employed by bacteria to fight off invading viruses, from a biological curiosity to a potentially transformative gene-editing tool. “They were definitely pioneers in studying this particular enzyme system,” he said. But he contends that their specific contributions don’t constitute the whole story of the technology’s development. “The spark that [Doudna] had was that CRISPR would be a programmable cutting device,” Church said. “But getting it to do precise editing, via homologous recombination, was a whole other thing.”

The CRISPR/Cas system is a naturally occurring form of immune defense employed by bacteria to fight off invading viruses. A small constellation of researchers aided in describing, isolating, and studying CRISPR decades before it was ever imagined as a gene-editing tool.

In 1987, Yoshizumi Ishino and his colleagues at Osaka University in Japan published the sequence of a peculiar short repeat, called iap, in the DNA of E. coli . Eight years later, Francisco Mojica from the University of Alicante in Spain and his colleagues characterized what would become known as a CRISPR locus; The researchers later realized that what they and others had considered disparate repeat sequences actually shared common features.

Mojica and his colleague Ruud Jansen coined the term CRISPR (for clustered regularly-interspaced short palindromic repeats) in correspondence with each other in the late 90s and early 2000s, and Jansen used it in print for the first time in 2002. A steady trickle of research on the prokaryotic immune module followed, with industry scientists such as Philippe Horvath and Rodolphe Barrangou from dairy manufacturer Danisco joining academic researchers—among them, Luciano Marraffini at Rockefeller University, John Van der Oost at Wageningen University in the Netherlands, Sylvain Moineau of Canada’s Laval University, Virginijus Siksnys at Vilnius University in Lithuania, and Eugene Koonin of the National Center for Biotechnology Information—pursuing a more robust understanding of how CRISPR worked in nature. This early work on CRISPR was “kind of a community effort,” said Church.

Zhang agreed. “This is a remarkable scientific story in its own right, and the work on genome editing . . . was only possible because of a strong, global foundation of basic research into the biology of CRISPR,” he wrote in an email to The Scientist. “Many researchers contributed to the discovery and understanding of CRISPR,” he added. “Any discussion of the development of CRISPR into the genome-editing tool it is today would be incomplete without recognizing the critical contributions of each of these individuals and their teams.”

Now that the technology is being applied, its origin story has been oversimplified in both published accounts and by award organizations. “It’s a litany now,” Church said. “It’s like a hymn.”

And of all the researchers who might deserve more credit for developing CRISPR, Church contends that he’s at the top of the list. “There were definitely at least two teams [Doudna’s and Charpentier’s] involved in getting cutting to work,” Church continued, “and then there were two teams [Zhang’s and mine] that got it to work in humans with homologous recombination. So you could say two and two. But to oversimplify that back down to three, is like consciously omitting one.”

Why that happened isn’t readily apparent, said Doudna. “Looking at peer-reviewed publications, George Church published a paper at the same time in the same issue of Science magazine as Feng Zhang on using CRISPR technology in human cells,” she told The Scientist. “It’s very clear what’s in the scientific record.”

That CRISPR/Cas9 gene-editing was a larger collaborative effort that extends beyond Doudna, Charpentier, and Zhang is an issue that others have spoken and written about. An economic manifestation of the debate, in the form of a patent dispute, has even sprung up within the oft-cited CRISPR trinity. Then there are the prizes. In 2014, Doudna and Charpentier were awarded a $3 million Breakthrough Prize. And last year Thomson Reuters predicted a Nobel Prize in Chemistry for the duo. (The 2015 honors went to a trio of DNA repair researchers instead.)

Meanwhile, the media continues to perpetuate the condensed CRISPR origin story when mentioning the technology’s evolution in the space of a sentence or two. Part of that oversimplification is rooted in the fact that most modern life-science researchers aren’t working to uncover broad biological truths. These days the major discoveries lie waiting in the details, meaning that any one lab is unlikely to shed all the necessary light on a complex phenomenon—much less on how to adopt that phenomenon for human purposes—in isolation. That reality does little to allay what is probably a fundamental human urge to pin a few names and faces on major breakthroughs.

But how do we fix a problem of public perception that stems from the very nature of scientific discovery in the modern age? Doudna had a suggestion. “I think it’s great that journalists look into this and explain the process of science,” she said. “Things don’t happen overnight; they happen through a process of investigation. And very typically there are multiple laboratories that are working in an area, and it’s almost universally true.”

Correction (January 2): The orignial version of this article gave an incorrect primary affiliation for Eugene Koonin. He is at the National Center for Biotechnology Information and the National Library of Medicine. The mistake has been corrected, and The Scientist regrets the error.