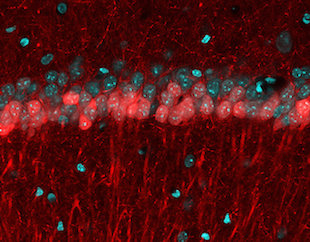 Superficial (red) and deep (cyan) neurons in CA1 mouse hippocampusNATHAN DANIELSON/MORTIMER B. ZUCKERMAN MIND BRAIN BEHAVIOR INSTITUTEIf you’ve ever found yourself walking a few city blocks only to realize you’ve gone in completely the wrong direction, you’ll appreciate the importance of the brain’s ability to keep track of its location and navigate effectively.

In recent years, research on mammalian navigation has focused on the role of the hippocampus, a banana-shaped structure known to be integral to episodic memory and spatial information processing. The hippocampus’s primary output, a region called CA1, is known to be divided into superficial and deep layers. Now, using two-photon imaging in mice, researchers at Columbia University in New York have found these layers have distinct functions: superficial-layer neurons encode more-stable maps, whereas deep-layer brain cells better represent goal-oriented navigation, according to a study published last week (July 7) in Neuron.

For that past few decades, scientists have been chipping away at an explanation of the brain’s “inner GPS.” The 2014 Nobel Prize in Physiology or Medicine honored the discovery of so-called place cells and grid cells in the hippocampus, which keep track of an individual’s location and coordinates in space, respectively. Since then, studies have revealed that neurons in different hippocampal regions have distinct genetic, anatomical, and physiological properties, said Attila Losonczy of Columbia, Danielson’s graduate advisor and a coauthor on the study.

“What was unknown was how these subpopulations of pyramidal cells relate to the functions the hippocampus supports,” namely, spatial navigation and memory formation, Losonczy told The Scientist.

Losonczy, Danielson, and colleagues used two-photon calcium imaging to measure neural activity in the superficial and deep sublayers of hippocampal area CA1 in mice while the animals performed either “random foraging” or “goal-oriented learning” tasks. Two-photon imaging “is an extremely powerful method, because it allows us and others to look at the activity of not just a single cell, but of a relatively large population of neurons in hippocampal CA1,” Danielson explained.

The random foraging task involved running on a treadmill and receiving random water rewards. The goal-oriented learning task had the animals running on a treadmill and receiving rewards at predictable intervals. By measuring when the mice made licking motions while running, the researchers could see whether the animals had learned the location of the rewards.

Deep CA1 neurons were more active than superficial ones in both tasks. Superficial brain cells formed a more stable representation than deep cells of the animals’ environment. But the latter were more highly tuned than the former during the goal-oriented learning task; activity in deep brain cells was also more predictive of the animals’ performance, the researchers found.

“What’s particularly impressive to me in the study is that the anatomy in the hippocampus segregates two aspects of memory”—a stable map of the environment, and a representation of new goals or targets, neuroscientist Howard Eichenbaum of Boston University, who was not involved in the work, told The Scientist.

It’s a bit like Google Maps on your phone, Eichenbaum explained: the plot of your environment with a dot for your location is the stable map, whereas the target address and directions for getting there comprise the goal-oriented system.

The findings support those of previous studies. In a 2011 experiment, neuroscientist Gyorgy Buzsaki of New York University School of Medicine and colleagues found clear functional differences between deep and superficial neurons in the CA1 of rats. “The most astonishing [finding] was that neurons in both layers lock to the theta cycle, the most prominent navigation rhythm in the hippocampus,” Buzsaki told The Scientist. But during rapid eye movement (REM) sleep, the deep neurons shifted the phase of their firing by 180 degrees. The findings suggest that, compared with superficial brain cells, deep neurons receive more input from the animal’s external environment, such as when the rodent is seeking a specific goal, Buzsaki noted.

Of course, rodent brains aren’t the same as humans’.

Compared with rodents, humans have a much larger CA1 area, and a much larger ratio of cortex association areas to hippocampus. Extending the findings to humans and other primates “would require a systematic study comparing their [hippocampus] anatomy and structure with their performance” in a navigation task, Danielson said.

Perhaps one of the best studies of human navigation ability is the 2006 London taxi driver study. Researchers from University College London conducted structural MRI scans of London cab drivers and bus drivers, controlling for individuals’ driving experience and stress levels. Compared with the bus drivers, the cab drivers had a higher volume of grey matter in their mid-posterior hippocampi, and a lower volume in their anterior hippocampi. The more years of experience the cabbies had, the greater the grey matter differences, the researchers found.

But interestingly, the taxi drivers were worse than the bus drivers at acquiring new spatial information, suggesting that the former’s expert knowledge of the city “might come at a cost to new spatial memories and gray matter volume in the anterior hippocampus,” the researchers wrote in their study.

“What’s emerging in the field in general are efforts to figure out . . . the dimensions in the hippocampus to map location,” Eichenbaum said. For example, there’s the distinction between stable versus specific knowledge. “We’re constantly going back and forth between general knowledge and specific memories.”