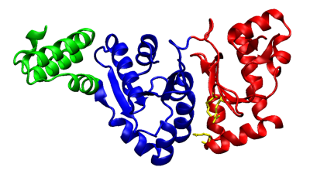 E. coli DnaG RNA polymerase domainWIKIMEDIA, LMO402Long known for its role in transcribing the genome’s code into messenger RNAs that can be translated into proteins, the enzyme RNA polymerase may also survey the genome for damage. That’s according to a study led by investigators at the New York University Langone Medical Center, which was published last month (January 8) in Nature. Biochemist Evgeny Nudler and his colleagues have described one way in which bacterial cells rely on RNA polymerase to start repairing DNA damage, which, the authors added, hint at pervasive transcription—the surprising revelation of noncoding RNA molecules and an axis of debate in molecular biology.

As RNA polymerases glide along strands of DNA transcribing them into new RNA molecules, the enzymes can at times get stuck when they encounter damage in the genome, like a zipper caught on a faulty tooth. “RNA polymerase gets stuck all...

One way to get RNA polymerase going again involves a molecule known as UvrD helicase. Through a series of in vitro and in vivo experiments, Nudler’s team showed how this molecule pulls the transcription enzyme back from the damage site by unwinding DNA strands. “Eight or 10 nucleotides back is enough to expose the lesion to repair enzymes,” Nudler said. The researchers also showed that UvrD recruits the repair team, which excises and replaces damaged DNA.

Though the study only focused on one type of DNA repair in E. coli, it’s a mechanism that appears to be conserved throughout the tree of life, said James Cleaver from the University of California, San Francisco, who studies DNA repair-related diseases and was not involved in the work.

“It’s very helpful to see the same backtracking mechanism,” which has been suggested in humans and other eukaryotes, Cleaver said. “In all the years of studying DNA repair, there are still details to unravel in E. coli, which is supposedly a simple little bug.”

In humans, RNA polymerase cofactors CSA and CSB, or the proteins XPC and XPE, perform the same function as UvrD, helping RNA polymerase backtrack along the genome to expose DNA damage, said Cleaver. People who have mutations in this pathway suffer from conditions called xerodema pigmentosum or Cockayne syndrome, in which their cells cannot fix damage caused by ultraviolet radiation or other mutagens. Exposure to sunlight in xeroderma pigmentosum can cause skin and eye damage that greatly raises the risk of cancer; in Cockayne, the repair defect can cause developmental and neurological disease.

While the idea of transcribing and repairing DNA at the same time is nothing new, Nudler’s team has specified the mechanism of such transcription-coupled repair that allows RNA polymerase help maintain the integrity of the E. coli genome. “Whatever the DNA damage, RNA polymerase will probably be the first to recognize it,” said Nudler.

Moreover, Nudler suggested his team’s work could help explain the puzzling abundance of RNAs observed in human cells. In the last few years, researchers have recognized that many more RNA molecules are transcribed than are translated into proteins. “The boundaries between genic and nongenic regions are becoming more blurry,” said Thomas Gingeras, a biologist at Cold Spring Harbor Laboratory in New York.

And it appears RNA polymerase is working overtime: a handful of studies published in the last decade have suggested that the genome is “pervasively transcribed,” with up to 76 percent of the DNA converted into RNA. The question, then, as Nudler put it, is: “Why do these regions need to be transcribed? Why waste your energy to synthesize so many RNA transcripts?”

Noncoding RNAs have already been shown to help regulate which genes are translated into proteins and can affect chromosomal structure, Gingeras pointed out.

Nudler offered another possibility. “Maybe it’s a way to monitor the genomic DNA for damage,” he said. Noncoding RNAs could be a byproduct of the surveillance work.

“It’s an interesting idea,” said Gingeras. However, it’s an insight that might not carry over into humans.

While it might make sense for single-celled bacteria, whose genomes have been known to be fully transcribed, this idea is less likely to explain pervasive transcription in humans, wherein specific types of cells—like neurons or muscle cells—convert less than half of the genome into RNAs. It’s the difference between travelling with a well-packed suitcase, containing only what you need, and bringing everything but the kitchen sink. In any given human cell, there are regions that aren’t going to be transcribed, so they won’t be monitored, Gingeras explained.

Some researchers have suggested that while RNA transcription may be widespread, it’s not so frequent. It’s a complicated argument, based on the samples investigated and the different techniques used to detect RNAs in cells and tissues.

Harm van Bakel, a geneticist who studies DNA transcription at the Mount Sinai Icahn School of Medicine in New York City, said these are important considerations. After all, if you look through enough cells, you’re bound to find RNA you weren’t expecting in some of them. “Are you looking at a random event, or are you looking at a purpose-driven transcript that has meaning for a cell?” he asked.

Van Bakel acknowledged that some noncoding RNAs seem to be regularly transcribed for reasons that scientists have yet to understand. Much of the extra transcription could be incidental, he said, since most noncoding RNAs correspond to regions of DNA housed next to genes, indicating that they’re transcribed along with the genes.

It remains to be seen whether RNA polymerase’s role in DNA repair can help explain pervasive transcription, an issue which is still unexplained and contentious as ever. In the meantime, Nudler’s team plans to collaborate with another lab to investigate transcription-coupled repair in yeast.

“People right now don’t really know to what extent RNA polymerase contributes to DNA repair,” he said. “It may be much more than people thought before.”