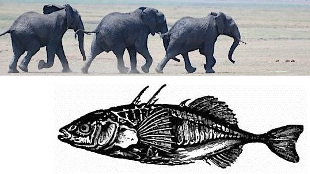 TOP: FLICKR, NILS RINALDI; BOTTOM: WIKIMEDIA, BOB BURKHARDTMuffin is a 40-pound cat who lives in New Hyde Park, New York. His owner, Kathleen Hansen, said Muffin—a cat she claims is the heaviest in the world—gets his name from a habit of snagging and eating baked goods. And although felines have a longstanding reputation as solitary pets, Hansen calls Muffin an extrovert. “He’s almost like a person,” she said. “He’ll go on his back, reach out with his paws and if you lean towards him, he’ll hug you and give you a kiss. He’s lovable.”

Like Hansen, most pet owners use a colorful array of adjectives to describe the quirks of their animal companions. They might say, “she’s so curious,” or “he’s much braver than my last dog.” Sound familiar? Well, about half of the researchers who study animal personality use similar terms. The other half thinks this use...

Animal personality is defined as the consistent behaviors specific to an individual animal. Personality researchers who use words like “brave” or “curious” are called “raters,” while those who measure personality as they would any other behavior are “coders.” For instance, when a rater uses “brave” to explain daring behavior, a coder may instead say—“individual X enters quadrants one and four within a two-minute period.” This inconsistency in the way researchers record individuality makes it difficult to compile and compare data, a necessary step in getting a good grasp of what animal personality really is.

And although some researchers argue that coders are more empirical and scientific than those favoring the use of adjectives, the reality is not so clear-cut.

All animal personality scientists grapple with how to reduce the human bias embedded in their experiments. “Trying to eliminate research bias is what this field is devoted to,” said biologist and coder Alison Bell from the University of Illinois, Urbana-Champaign. She said that even with coding, measuring a behavior as simple as two fish biting each other includes some level of judgment. What constitutes biting? Do the fish just need to bump mouths or must the researcher see teeth sinking into flesh?

Western culture is quick to attribute qualities like “shy” and “brave” to cats and dogs, according to animal ethologist Kristina Horback from the University of Pennsylvania School of Veterinary Medicine. Horback said that when the same traits are observed in an experiment looking at dolphins or elephants, for example, researchers steer clear of using adjectives to describe the behaviors. “Shy” and “brave” are risky words in a scientific setting, she explained, because they are reputed as subjective and only ever applied to humans.

Sam Gosling, a personality psychologist from the University of Texas at Austin, said that while many primate researchers are using rating approaches, researchers looking at fish, birds, and insects tend to use coding. He said these scientists come from different traditions, calling their choice methods a “vestige of their disciplinary roots.”

“Coders are falling over themselves trying to sound scientific,” said Gosling. He stands with the raters, arguing that the approach provides a deeper, more thorough understanding of an animal’s personality. Take a chimpanzee’s charging behavior. To coders, this is defined as one individual running full speed toward another. But what if one day, the chimpanzee runs at three-quarter speed? What if he sprints toward two individuals instead of one? The definition of a charge must be adjusted. “Isn’t there an element of judgment here?” Gosling asked.

Instead of tallying charges to illustrate a chimpanzee’s personality, a rater might describe the animal as being “aggressive.” But to be sure each rater understands aggression in the same way, individual research teams must use multiple experimenters to compare measurements against one another. As someone who uses both techniques in her research, Horback finds that measurements involving several raters are very accurate.

In her study of San Diego Zoo elephants, Horback used both rating and coding measurements of personality. Because violent elephant behavior is generally prevented in a zoo setting, the coding method did not pick up on aggressive displays. Raters, however, were able to include those rare aggressive moments that defined an elephant’s personality. “The caretakers already knew who was aggressive,” said Horback. “They know how certain individuals react to a broom, how they react to a hose, because they’re with them nine to ten hours a day.”

Background information about an animal can also help predict future behavior. Kristin Andrews, a philosopher of science at York University in Toronto, told the story of an orangutan from the Samboja Lestari Sanctuary in Borneo nicknamed, “The Policeman.” The Policeman got his name because he would continually sprint through the forest to break up fights between other orangutans. Based on this knowledge of his personality, caregivers at the sanctuary never worried that The Policeman’s quick movements were aggressive. He had a reputation for being helpful, not harmful.

But at Bell’s lab at the University of Illinois, animal personalities are not deduced from prior knowledge and are never described by adjectives. “Personality is just like any other trait,” she said. “I’m not necessarily measuring it with a ruler but with other sorts of instruments.” Bell codes personality in the three-spined stickleback fish. She uses a grid that divides the fish tank into sections so that each time an individual moves, its specific location can be recorded accurately. These movements help define the personality of each stickleback.

“Some individuals swim up and down in the same sections of the grid over and over,” said Bell. “Others will explore around and move into several different sections.” To describe the latter performance, Bell said she may use the term “exploratory behavior,” but won’t go as far as to call an individual curious or brave. “This is part of doing science, to be sure that we are separating data versus interpretation.”

Can a single recording method, either rating or coding, accurately measure personality in fish, elephants, and apes—all arguably vastly different creatures? Or does each animal warrant its own kind of measurements? Even within a single species, multiple approaches may be necessary, according to psychologist Stan Kuczaj from The University of Southern Mississippi. In his research with dolphins, Kuczaj uses just such a multidimensional approach to measure personality. He said that three dimensions are required for utmost accuracy: how dolphins interact with one another, with a human, and with a novel object. He explains that it’s the unique reactions to these different contexts that are most indicative of dolphin individuality.

Think on it. If you had to study your own personality, which method would best characterize the unique way you interact with the world? Gosling proposed a hypothetical scenario to help answer this question. “I’m going to send you out in a space ship,” he said. “You have two envelopes. The first holds things your family and friends have said about your character. The second is a complete list of the behaviors someone’s observed you performing. Which envelope would you open?”

Presented with this question, many personality researchers would answer “both.” But studies that combine the two methods are expensive and time-consuming. It’s more realistic for scientists to agree upon a common approach than to expect them to implement both methods into every study. For Horback, the solution is obvious: animal personality researchers should hold a meeting, where both raters and coders could come together to agree upon a shared method of measuring personality. “We have a common goal here,” she said. “Everyone wants to define personality correctly.” The question at the heart of the debate is this: Is it even possible for human researchers to successfully measure animal personality?

Either approach seems imperfect. Raters may bias their data by using adjectives they naturally associate with certain behaviors. And coders, who consider themselves more objective data-takers, might miss a level of complexity by purposefully avoiding the words that most suitably illustrate an animal’s actions. Perhaps the dilemma underlying the controversy is that an animal’s personality is much too familiar for a scientist to record both free of bias and with complete depth. Because, however reluctant, scientists are humans who recognize the shy demeanors, the insatiable curiosities, and the competitive spirits within each of their study subjects.