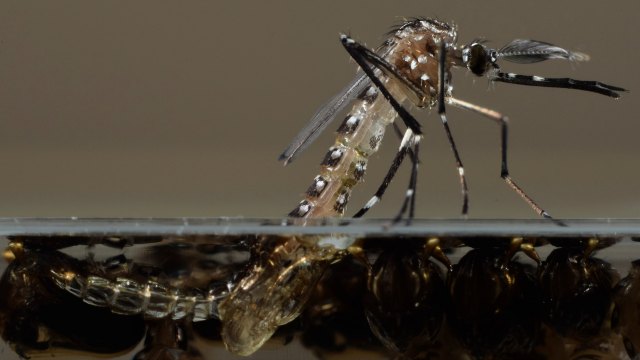 An adult Aedes aegypti mosquito emerges from its pupal case.OXITECLast week (October 5), the United States Food and Drug Administration (FDA) announced that the US Environmental Protection Agency (EPA) will assume responsibility for overseeing the approval and use of mosquitoes genetically engineered to act as pesticides, specifically, a variety of Aedes aegypti generated by UK company Oxitec. This regulatory change could lead to pilot releases of the mosquitoes in the U.S. sometime in the next year.

“We hope within the next three to six months we will get regulatory permission to go ahead [with] releases of our mosquitoes in the U.S,” says Derric Nimmo, a scientist at Oxitec.

Nimmo says that Oxitec initially worked with the US Department of Agriculture, and then with the FDA in cooperation with experts from the EPA and the Centers for Disease Control and Prevention (CDC). In August 2016, an FDA assessment—prepared with input from EPA and CDC officials—suggested that deploying Oxitec’s genetically modified (GM) mosquitoes would have no significant impact on the environment at a proposed release site in the Florida Keys.

It was a good sign for Oxitec, but residents balked at being a test site. And the FDA had yet to give approval for the insects’ release. In the guidance issued last week, the FDA clarified that the Oxitec mosquitoes are not drugs because their use is not intended to cure or treat disease, but to limit mosquito populations, thereby functioning as a pesticide.

The switch from FDA to EPA oversight reflects the EPA’s role in approval of pesticides, including traditional chemical pesticides used for mosquito control and others okayed by the agency that include GM microbial components. The EPA has also approved experimental release of Wolbachia-infected A. aegypti in Fresno County and Orange County, California, as well as in Monroe County, Florida, the location of the Florida Keys.

“EPA will regulate [genetically engineered] mosquitoes in the same way the agency regulates other pesticides,” an EPA spokesperson writes in an email to The Scientist. “The Federal Insecticide, Fungicide, and Rodenticide Act (FIFRA) gives EPA the authority to regulate the distribution, sale, and use of pesticide products to ensure they do not cause unreasonable adverse effects on people or the environment.”

Approval times vary depending on the type of application, according to the EPA spokesperson. “At this point, EPA has not received an application from Oxitec,” says the spokesperson, but typically, organizations begin by applying for an experimental use permit, at which point the agency has seven months to reach a decision. After collecting data in field testing, the organization can then apply for registration under FIFRA, and then the EPA has 13 to 25 months to complete its review.

Because experts from the EPA have collaborated with the FDA throughout Oxitec’s application process—including on the August 2016 finding that the environmental impacts of releasing the mosquitoes would be minimal—Nimmo is optimistic that the EPA’s regulatory process could move quickly.

Oxitec researchers have engineered their mosquitoes with both a fluorescent reporter gene and a self-limiting gene that kills the insects at a young age, before they can reproduce. They breed adults by adding tetracycline to the insects’ water, which inactivates the self-limiting gene, allowing larvae to grow to adulthood. Then they sort and release adult male mosquitoes, which mate with wild females. 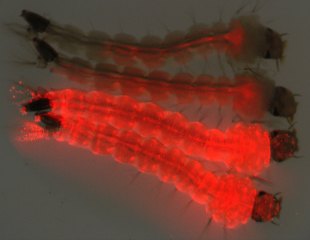 Oxitec mosquito larvae glow red, while wild-type larvae do not.OXITECBecause there is not enough tetracycline in the environment to shut down the self-limiting gene, the progeny of GM-wildtype matings die young. Oxitec scientists determine how many males have mated with wild females by monitoring the presence of the fluorescent reporter in larvae they collect in simple traps and then adjust how many GM male insects they release.

The Florida Keys Mosquito Control District spends about $1.1 million per year on monitoring populations and deploying conventional insecticides to reduce A. aegypti numbers by half. The Florida Department of Health has recorded multiple locally acquired cases of both dengue and Zika virus in recent years, making the state a prime target for mosquito population reduction. Officials from the Florida Keys Mosquito Control District have already partnered with Oxitec to plan a pilot release, but cannot proceed without regulatory approval.

In field trials in the Cayman Islands, Panama, and Brazil, the release of Oxitec male mosquitoes has resulted in a greater than 90 percent reduction in A. aegypti populations. The company has also seen positive results beyond their pilot trials. A collaboration with officials in Piracicaba, Brazil, has led to the successful treatment of a neighborhood of 5,000 residents that is in the process of being expanded to cover an area that houses 300,000 people. A new facility near Piracicaba can produce 60 million GM male mosquitoes per week and serve a human population of 3 million.

“This is not a new technology,” says Nimmo. “We’ve been deploying this in the field for seven years.”