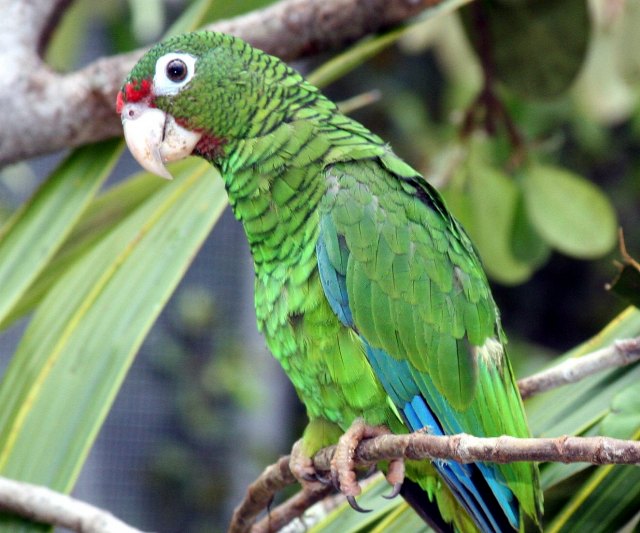 Despite the devastation to Puerto Rico, its only native parrot, Amazona vittata, appears to have weathered Hurricane Maria fairly well. That wasn’t the case for this endangered species in previous storms.WIKIMEDIA, TOM MACKENZIEHurricane Maria decimated Puerto Rico. With sustained winds of 155 miles per hour, much of the US territory has been without power for weeks. Many residents lack running water, hospitals have been limping along on backup generators, and the island’s agriculture has been essentially flattened. The toll on local wildlife remains far from appreciated, but it’s clear from Maria and other hurricanes that some animal populations suffer from big storms—while others thrive.

Endangered animals are of paramount concern to conservation biologists. When a few key deer (Odocoileus virginianus clavium) were spotted on Big Pine Key in Florida after Hurricane Irma swept through, it prompted a sigh of relief. Likewise in Puerto Rico, one...

Vibrant and vocal, these birds are rare in the wild. A. vittata were first listed as critically endangered in 1968, with their numbers dipping to 13 in less than a decade. Since then, conservationists have been working tirelessly, breeding the birds in captivity and releasing them into the wild, to boost their numbers. In 1989, 47 individuals flitted about the island, with at least 12 forming breeding pairs.

Then, Hurricane Hugo hit that year, ravaging the island and the birds. The population fell to just 22. It rebounded and then again, devastating storms in 2015 stripped the forest of food and the birds’ numbers plummeted. Now, Hurricane Maria has marked the island, but the birds’ numbers, at least those in captivity, seem to be stable. Damage to the aviaries caused the death of a few birds, probably from heat or the stress of being moved to different cages, Michelle Eversen, a biologist and program coordinator for FWS in the southeast U.S. and Caribbean, wrote to Davis. In the wild, “we don’t know how many survived or if they are having difficulty finding food after the storm,” Eversen reported. But researchers working with the captive birds have seen wild Puerto Rican parrots near two of the aviaries on the island—a hopeful sign.

Not all birds have been so lucky. A masked booby, probably blown off course as Hurricane Jose worked its way up from the tropics in September, landed on the shores of Massachusetts recently. Workers at Wild Care Cape Cod, a wildlife rehabilitation facility in Eastham, tried to take care of the bird, but it was reported dead October 3.

Birds, like us and other animals, take a few different strategies in the face of storms. Some leave before it hits. They can sense drops in barometric pressure, so they know when to go. Others fly straight into a storm, though tracking birds with satellite tags has shown that the success of that strategy is mixed. Still other birds, such as the Puerto Rican parrots, shelter in place. What researchers don’t yet know is how well these tactics work.

“There aren’t a huge number of studies about what animals do in hurricanes,” says biologist Helen Bailey of the University of Maryland Center for Environmental Science. The studies don’t exist because they are hard to do; surveying animals in extreme weather isn’t really realistic. 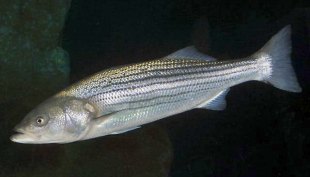 Morone saxatilisWIKIMEDIA, D ROSS ROBERTSONA few years ago, Bailey and a coworker, David Secor, got lucky with some satellite-tagged striped bass (Morone saxtilis) in the Hudson River Estuary and were able to study how they responded to a series of tropical storms that hit the New York City area in 2011. The bass swam out of the estuary, down the Hudson River, out of New York Harbor and toward coastal waters.

It was a migratory behavior researchers hadn’t seen before, Bailey says. She and Secor reported the results in 2016 in Scientific Reports. Bailey adds that if this kind of migration is common in big storms and those storms become more frequent as a result of climate change, the movement could impact fishes’ numbers. More work needs to be done to know for sure.

Still, the movement of the striped bass along with evidence from a few other studies is revealing that researchers have the tools to start to monitor animals’ behaviors leading up to, during, and after extreme weather events. The results, for instance, bolster a 2003 report revealing that blacktip sharks move to deeper water just before intense weather. Similar to birds, sharks appear to be able to sense drops in barometric pressure and respond by searching for safety.

Not all animals are so savvy, instead going for opportunistic survival tactics. The most famous case is of 15 green iguanas riding waterlogged trees from Guadeloupe to Anguilla—a distance of 200 km—in 1995 after Hurricane Luis and Hurricane Marilyn. Recently, researchers also reported an incredible number of species rafting across the ocean after the 2011 tsunamis that struck Japan.

Such studies show that rafting has influenced “how a great many species of animals and plants arrived on islands or distant shores,” says Williams College marine scientist James Carlton, who led the tsunami study. This means intense storms may play a major role in evolution. And that includes the advance of invasive species. 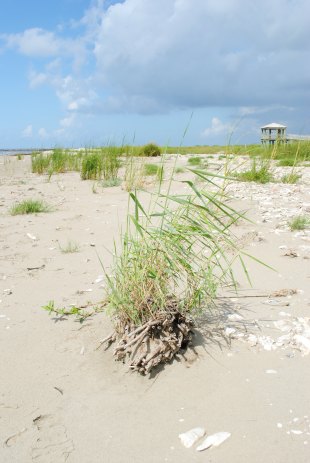 On the coast of Louisiana, Phragmites australis, an invasive perennial grass, is spreading with the help of hurricane winds and possibly other extreme weather events.GANESH BHATTARAI, KANSAS STATE UNIVERSITY

Researchers knew that local events that disturb an ecosystem often lead to increased resources for species invading a new territory. But the effects of large-scale disturbances, such as hurricanes, on biological invasion had never really been examined until recently, Ganesh Bhattarai of Kansas State University tells The Scientist in an email.

In 2014, Bhattarai and James Cronin of Louisiana State University reported in PLOS ONE that hurricanes encouraged the spread of patches of the invasive perennial grass Phragmites australis in wetlands along the Atlantic and Gulf Coasts of the U.S. Aerial images mapping the reed, along with the history of hurricanes in the region, revealed that hurricane frequency alone explained 81 percent of the change in growth rates of P. australis patches.

Such a result showed that “extreme climatic events such as hurricanes can be of overriding importance in the spread of invasive species,” Bhattarai says.

As climate change continues, the frequency of intense storms is predicted to increase. More storms result in more opportunities for species invasions, posing a serious threat to the health of natural ecosystems in coastal areas. “A substantial change in the structure and functioning of coastal wetlands, one of the most productive ecosystems in the planet, by invasive species should be a major concern to everyone,” Bhattarai says.