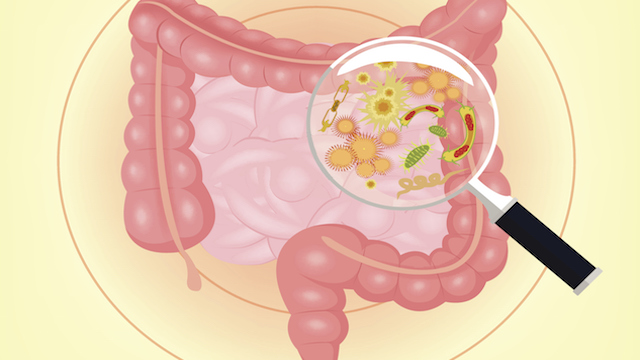 Our relationship with microbes begins early in life. As an infant passes from the womb to the world through her mother’s birth canal, she is exposed to a multitude of bacteria and fungi. Although a handful of studies now suggest that the womb may not be sterile as many once believed, microbes are much more abundant in the outside world.

How our bodies learn to peacefully coexist with cells that are not our own is still unclear. Afterall, we spend most of our lives fighting off microbial invaders. “Once you’re born, you’re assaulted by billions of bacteria, so if the babies’ [immune systems] responded in the appropriate adult manner, they would just be auto-inflammatory bundles,” says Grace Aldrovandi, a professor of pediatrics at the University of California, Los Angeles. “The [question] then is: How does the immune system learn when to relax and when to...

Over the last few years, researchers have started to uncover how the immune system dampens its response to friendly microbes. For example, one 2013 study, published in Nature, revealed that a specific population of red blood cells possessing the CD71 protein—which is only plentiful during the first week or so of life—helped suppress the immune response in baby mice. In humans, these CD71+ cells, which the team found were abundant in the blood of umbilical cords (but scarce in adult blood), also appeared to have immunosuppressive properties.

“When I went to medical school, I learned that babies had immature, wimpy immune systems,” Aldrovandi says. “We now realize that in fact they have very sophisticated immune systems, they’re just programmed in a different way.”

Recent rodent studies have revealed that, in the adult mouse colon, bacterial metabolites such as butyrate, a product of fermentation, can accelerate the differentiation of progenitor cells into regulatory T cells, which help keep the immune system in check.

While these studies indicate that products of some bacterial species may help induce tolerance in the adult immune system, Rodney Newberry, a professor of gastroenterology at Washington University School of Medicine, says that “the role for these tolerance-inducing species is not straightforward,” since your ability to become tolerant is better early in life when, paradoxically, these species are less abundant than in later childhood and adulthood.

When I went to medical school, I learned that babies had immature, wimpy immune systems. We now realize that in fact they have very sophisticated immune systems, they’re just programmed in a different way.
—Grace Aldrovandi, UCLA

This idea that the first bacteria we encounter are crucial to our immune development is supported by the growing evidence for the so-called “hygiene hypothesis,” which posits that early exposure to microbes determines our predisposition to immune-mediated disorders. For example, epidemiological analyses in human infants have found that antibiotic use during the first year of life increases the likelihood of developing inflammatory bowel disease and that children who grow up on farms tend to be more resistant to allergies. Mouse studies have found similar effects—researchers have reported that treating neonatal rodents with antibiotics increases their susceptibility to allergic asthma, while exposure to gut microbes during early life protects them from developing immune-mediated disorders later on.

In addition, Newberry says, although the prevailing assumption in the scientific community has long been that our immune systems continually gain antigen-specific tolerance to gut bacteria through lifelong interactions, some studies did not support this theory.

For example, one would expect healthy individuals to be tolerant to the CBir1 antigen found in commensal bacteria’s flagella. However, researchers have observed that injecting naïve T cells specific to this antigen into adult mice did not initiate a regulatory T-cell response to suppress the immune system, despite the abundance of the antigen in the gut lumen. Instead, when this procedure is repeated in rodents with acute gastrointestinal (GI) infections, the cells expanded into inflammatory effector T cells.

“These observations challenge the assumption that we have ongoing, antigen-specific tolerogenic encounters with our gut bacteria throughout life,” Newberry tells The Scientist. “This prompted us to look at events pre-weaning as the gut microbiota and the gut immune system co-develop, each shaping the other.”

A time window for bacterial colonization

Newberry and his colleagues recently examined the early interactions between the immune system and certain harmless gut bacteria, such as Lachnospiraceae, in newborn mice. Their results, which they reported last month (December 17) in Science Immunology, revealed a time window during early life when the animals developed antigen-specific regulatory T cells specific to those microbes.

This critical phase, which occurred between 10 and 20 days of life, was initiated by a drop in levels of epidermal growth factor (EGF), a protein abundant in breast milk during the pre-weaning period, in the GI tract of mice. During the first week or so, high concentrations of gut EGF in the mouse pups blocked the formation of goblet cell-associated antigen passages (GAPs)—channels that allow antigens from the gut lumen to enter the lamina propria, where the immune cells lie—preventing the development of regulatory T cells.

We think this forms the basis of how we’re tolerant to our [gut microbes]—but this can’t be the whole story, because not all your gut bacteria are present [during this time].

Essentially, what appears to be happening is that the reduction of EGF during this time period allows bacterial antigens to pass through pups’ guts, enabling the immune system to learn to not to initiate an inflammatory response.

After 20 days, Newberry’s team observed, the presence of microbes blocked the formation of GAPs once again, ending the period during which the immune system was able to develop a tolerance to specific bacteria. According to Newberry, it is not entirely clear how this works—whether the GAP inhibition occurs due to the absolute amount of bacteria present in the gut, or if there are specific elements of microbes triggering an end to antigen passage. Blocking GAP formation during the critical period, or shifting the time during which it occurred, prevented the gut immune system from developing regulatory T-cells specific to commensal antigens, making mice more vulnerable to colitis induced by DSS, a chemical that disrupts the gut’s epithelial barrier, later in life.

“We think this forms the basis of how we’re tolerant to our [gut microbes]—but this can’t be the whole story, because not all your gut bacteria are present [during this time],” Newberry says.

The most surprising result in this paper, according to Gérard Eberl, an immunologist at the Instutit Pasteur in Paris who did not take part in this work, was that EGF levels determined when the animal needed to be exposed to microbes. Although levels of this protein in mothers’ milk were not directly examined in this study, Newberry says that his team is currently performing additional experiments to confirm that this process is under maternal control. If deemed true, this finding could be relevant to people as well, given that researchers have found that human breast milk is rich in EGF and tapers over time.

Vincent Young, a microbiologist at the University of Michigan who was not involved in this study, says the timing of these events is hard to extrapolate to humans because our weaning periods are much more variable. Aldrovandi adds that because mice are born more immunologically immature than people, there may be some differences in the events that occur shortly after birth.

The idea that there may be a window of optimal bacterial colonization supports the work of those who promote “vaginal seeding,” a procedure in which a newborn born via C-section is swabbed with a sterile gauze that was incubated in the mother’s vagina shortly before birth, to restore microbial communities to levels found in vaginally born babies. Last year, a group of researchers published a small pilot trial—with four mothers who volunteered to undergo the procedure—that reported promising results.

Studies have found that exposure to the microbes in a mother’s vagina at birth might contribute to their infants’ health later in life. Although there have been some conflicting results, scientists have observed that babies delivered vaginally and by C-section have clear differences in the composition of their microbiomes, and some studies suggest that the latter might be associated with negative health effects, such as obesity and immune-mediated disorders.

Some scientists have advised against the practice, citing concerns about transferring potentially infectious vaginal bacteria. “To prevent that from happening, we have a very conservative protocol to make sure that no babies will be exposed to any potentially pathogenic bacteria,” says Noel Mueller, an epidemiologist at Johns Hopkins University who is currently involved in the larger trial of vaginal seeding.

Still, whether vaginal seeding procedures have long-term beneficial effects remains an open question, Aldrovandi says. “I think if you look early on, you can clearly see a difference between C-section and vaginally born infants,” she adds. “But we’re finding, and there are other studies showing, too, if the infants are breastfed, those differences dissipate over time.”

Multiple questions remain—such as how the immune system is able to tell the difference between “good” and “bad” bacteria and what types of gatekeeper mechanisms exists in parts of the body other than the gut. An infant’s first microbes may play other important roles as well—for example, releasing signals that cause the epithelium to mature, as Young and his team recently found.

As scientists work to uncover the specifics of a healthy infant microbiome and how it assembles during early life, Young warns, a common misconception is the belief that we know enough to make solid medical recommendations. “We don't have the answers yet,” he adds. “But as we gather data, we will understand more about what the complexities are, and eventually, perhaps, understand what we ‘should’ do.”