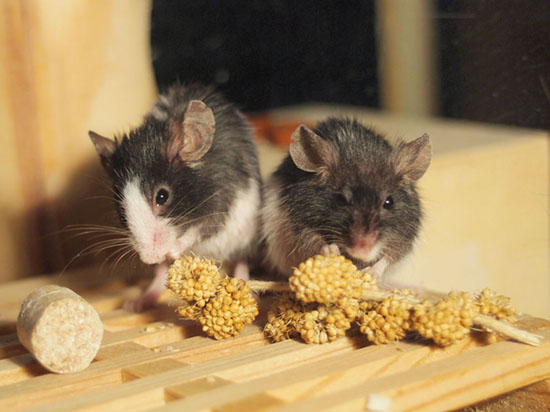 WIKIMEDIA, TIIA MONTOWhen Kathleen Gardiner first encountered female mice with Down syndrome, she was surprised to find that the rodents’ brains showed unexpected abnormalities. Gardiner, a neuroscientist at the University of Colorado School of Medicine in Aurora, knew that trisomic male mice typically had perturbed protein levels in their hippocampuses. But these trisomic female mice showed the most serious changes in their cerebellums.

“Right away, there’s a brain region sex difference,” Gardiner said. “It’s very interesting to ponder the fact that this could lead to sex differences in the learning, memory, or behavioral abnormalities associated with [Down syndrome].”

See “Sex Differences in the Brain”

Although Gardiner recognized that differences between mouse sexes would not necessarily translate into sex differences in humans, she considered the potential implications for clinical studies on Down syndrome therapies. “If we find that males or females are differing not only in their baseline...

Indeed, sex differences in model organisms are becoming increasingly apparent. Studies have shown sex differences in mice can affect cardiovascular health, liver disease, and cancer risk. Many of these studies are now published in Biology of Sex Differences, where Gardiner’s own work on the trisomic female mice appeared.

In 2014, US National Institutes of Health (NIH) Director Francis Collins threw a spotlight on the problem of male mouse bias in preclinical trials. Months later, the agency issued a requirement that grant applicants use both sexes of model organisms in their work. “Strong justification from the scientific literature, preliminary data, or other relevant considerations must be provided for applications proposing to study only one sex,” the NIH wrote.

“Many scientists in the past assumed that the differences between males and females were often irrelevant,” Janine Austin Clayton, director of NIH’s Office of Research on Women’s Health, wrote to The Scientist in an email. “As such, there was an overreliance on male animals and cells, inattention to sex effects, and inconsistent reporting of sex-specific findings in publications.”

“We know better now,” she added. “We have learned that sex does matter.”

Male mouse bias is a problem because “important biological effects can be missed or misinterpreted,” said Julie Pfeiffer, an associate professor of microbiology at the University of Texas Southwestern Medical Center in Dallas. Pfeiffer and colleagues published a study in the Journal of Virology last month (January 18), in which they showed that a specific virus replicated better in male mice than in females. “If we had used only male mice in our experiments, we wouldn’t have discovered that sex hormones influence intestinal replication of coxsackievirus B3,” she said.

Nonetheless, researchers are often reluctant to introduce both sexes into their mouse experiments. One of the most obvious reasons is cost. “If you need 15 mice for a study, but want to use both sexes, that means you need 15 males and 15 females,” Gardiner said. “That doubles your cost.”

There’s also the issue of the female estrus cycle, a hormonal wildcard that can change study results. “There are ways to confine your studies to female mice with synchronized estrus cycles,” Gardiner said, acknowledging that this often adds an extra experimental step.

The added inconvenience and cost means that some researchers shy away from incorporating female mice into their studies, despite the NIH’s guidelines. Others take a more principled approach to the issue. Shortly after the agency released its new rules, neuroscientist R. Douglas Fields wrote a 2014 opinion article for Scientific American, criticizing the mandate. The requirement “costs money and requires a duplication of time and effort—time that researchers might not have to spare or that might be better spent conducting other research—that is rarely practical or scientifically warranted,” he wrote.

In an interview with The Scientist, Fields said that he considers research on sex differences “very important,” but added that “there’s a right way and a wrong way to do it.” In many cases, he argued, using both sexes in a study is scientifically unnecessary, and could introduce unexpected variables. “This is why we cannot have people mandating how scientists should do their research,” he said. “You can’t make a blanket statement—you have to look at each study in which the investigator concluded that one sex may be excluded.” Requiring that scientists study both male and female mice when not scientifically necessary “doubles your effort and doubles your time, all while unfunded with no additional money,” Fields told The Scientist.

At the core of the debate is the question of whether an increase in the number of sex-balanced studies would result in more reliable human clinical trials or better treatments for diseases. That remains unclear, although studies suggest that it might.

“We know that sex affects health beyond simply reproductive matters,” Austin Clayton said. “For example, small coronary arteries are more frequently involved in heart disease in women. This can contribute to differences in symptoms and potentially make it more difficult to detect heart disease in women. Studying sex throughout the research process could inform care decisions if sex-specific research results are found.”

Still, it is not yet known whether eliminating male mouse bias would translate into better clinical trials or an improved standard of care for women. Pfeiffer, for one, is not convinced.

“Even if studies use both male and female mice, it will not ensure that mouse studies will always mirror results in human trials,” she said. “Mouse studies are a critically important stepping stone toward translational science, but controlling for sex bias will not solve all problems.”

But Gardiner maintains that, whether scientists can demonstrate the effects on human trials or not, it is crucial that they continue to study both sexes. “You just have to do it,” she said. “If you actually do two separate experiments and observe no difference between males and female, perhaps it’s legitimate not to care. But for most cases, we don’t know—so we basically have to bite the bullet.”