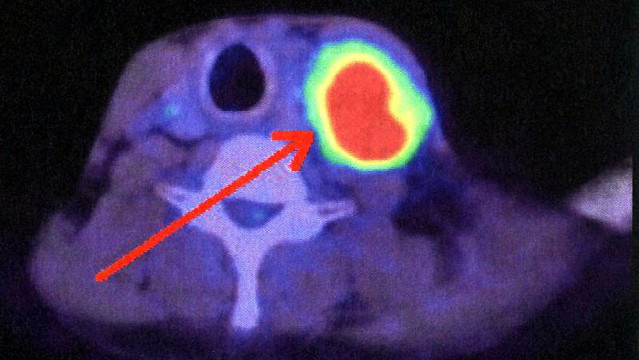 Positron emission tomography scans like this one show the locations of metastatic tumors. WIKIMEDIA, AKRIA KOUCHIYAMAAlthough metastasis is the leading cause of death among people with cancer, researchers are stumped about which molecular signals trigger the exit of malignant cells from primary tumors to start new ones in other parts of the body. Two studies published in Nature this month highlight roles in metastasis for an unexpected group of molecules—lipids.

“For many years, we were studying peptides and proteins,” said Mariusz Ratajczak, a cell biologist at the University of Louisville who was not involved in the studies. “Now we are coming to bioactive lipids.”

In the first study, published January 5, researchers at the Institute for Research in Biomedicine (IRB) in Barcelona reported that, in mice, human oral cancer cells that are most likely to migrate from primary tumors are marked by the surface protein, CD36—a scavenger...

When the researchers knocked down CD36 with short hairpin RNA before the injecting oral cancer cells into mice, they prevented the cells from seeding metastatic tumors in the lymph nodes of 80 percent to 100 percent of the animals without significantly changing the frequencies of primary tumors. “What’s really cool here is that they showed that CD36 wasn’t necessary for self-renewal, but was necessary for dissemination and metastasis,” said Justin Lathia, a cell and molecular biologist at the Cleveland Clinic who was not involved in the work. This study, he added, demonstrates that metastatic cells don’t have to be cancer stem cells, which many researchers believe to be the case.

It also suggests that metastatic cells may have their own unique metabolic regulation. The IRB team demonstrated that feeding mice a high-fat diet increased the size and number of metastatic lymph node tumors. This effect was lost when CD36 was knocked down. The researchers generated the same effect when they pretreated the cancer cells in culture with a dietary fatty acid called palmitic acid. Lathia note that while this finding could provide insight into the link between obesity and cancer, “human diets are far more complex than what we have here.”

The researchers also used a CD36-blocking antibody to shrink lymph node metastases, and induce remission in 15 percent of treated mice. According to Lathia, CD36 may make a good drug target. Blocking the receptor could be helpful beyond oral cancers: the authors used public databases to examine CD36 expression levels in several tumor types, finding that the receptor’s abundance correlated with metastasis.

The authors suggested that CD36 may give metastatic cells their edge by allowing them to utilize fatty acid oxidation as an efficient way to generate ATP. Kazuaki Takabe, a cancer biologist at Roswell Park Cancer Institute in Buffalo, New York, wondered whether CD36 might also contribute the cells’ preference for lymphatic vessels and lymph node microenvironments, where the receptors’ ligands are more prevalent.

A second study, published January 12, highlighted such a role for lipid signaling in the tumor microenvironment. By inoculating a series of 810 knockout mouse lines with melanoma cells, a group at the Wellcome Trust Sanger Institute in Cambridge, U.K., found that when mice lacked a protein called Spns2, the cancer cells formed far fewer metastatic tumors in the animals’ lungs. Spns2 transports the bioactive lipid sphingosine-1 phosphate (S1P) out of endothelial cells and into the blood. “Generally, the concentration is much higher in the blood than in the tissue,” said Ratajczak. S1P forms a gradient that attracts immune cells and other cells from organs and into blood and lymphatics.

In Spns2-deficient mice, this gradient was disrupted, which allowed higher concentrations of effector memory T cells to remain in the lungs and kill off melanoma cells that tried to take up residence. The researchers replicated this phenotype by both knocking out spns2 in only lymphatic endothelial cells and by treating mice with a drug that increases S1P levels in lymphoid tissues.

Coauthor Anneliese Speak, an immunologist at the Sanger Institute, said that before Spns2 could be considered a drug target, its roles in tumors versus healthy lung tissue must be teased apart. “We sought to focus solely on the host,” she said. “The role of Spns2 in the tumor is confusing.” For example, noted Speak, high S1P levels in tumors may encourage cancer survival.

What both studies show, he added, is that there are many potential ways lipids may regulate metastasis. Ratajczak’s own group has found that at least two other bioactive lipids—ceramide-1 phosphate and lysophosphatidic acid—promote metastasis of Rhabdomyosarcoma cells. “It’s a very broad area,” he said. “But we should go in this direction.”