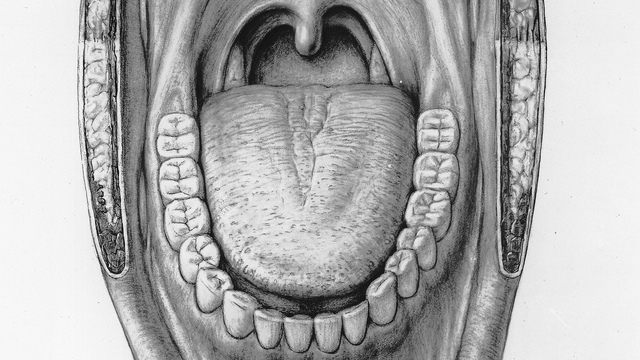 FLICKR, NATIONAL MUSEUM OF HEALTH AND MEDICINEThe late zoologist Charles Atwood Kofoid couldn’t possibly have known that he and his colleagues had begun to chip away at the human oral microbiome when, in 1929, they described in the Journal of the American Dental Association “animal parasites of the mouth and their relation to dental disease.” Scientists studying periodontal diseases have for decades realized that certain pathogenic bacteria contribute to inflammation and the eventual destruction of tissues within the oral cavity. But now it’s recognized that the mouth is populated with commensal microbes, too, and that these typically benign bacteria can contribute to a person’s health beyond their gums, tongue, and teeth.

“The whole world passes through the oral cavity,” said Purnima Kumar, an assistant professor of periodontology at the Ohio State University College of Dentistry. This makes investigating the microbial communities present in the mouth a challenge. “When...

In addition to recognizing transient mouth microbes, researchers must distinguish between the distinct bacterial communities within the mouth: the microbes found on the tongue differ from those found on the roof of the mouth, those within the biofilms that coat the teeth and gums, and those elsewhere in the oral cavity, said microbiologist Floyd Dewhirst from The Forsyth Institute in Cambridge, Massachusetts. In 2010, Dewhirst and his colleagues published in the Journal of Bacteriology a comprehensive examination of mouth-dwelling microbes, which formed the basis for the Human Oral Microbiome Database—a resource that’s now updated nearly every day.

Dewhirst, who joined the National Institutes of Health’s Human Microbiome Project when it launched in 2007, was among the first researchers to use 16S rRNA sequence data to identify the hundreds of bacterial species swabbed from healthy and diseased mouths. “By around 2004, we had made several hundred clone libraries and identified nearly 600 species,” he said. Today, the estimate is closer to 700.

Dewhirst and his colleagues have also sequenced the genomes of more than 200 species of the oral microbiome. “We’re trying to get genomes for as many [species] as possible and also to grow and isolate as many species that we’re aware of from clone libraries but nobody had ever [cultured],” he said. “We’re doing really well in terms of who’s there.”

“We are still exploring,” said William Wade, a professor of oral microbiology at the Barts and The London School of Medicine and Dentistry’s Blizard Institute. “We think there are about 700 species in the mouth, but almost every experiment we do, we’re finding [something] new.”

Some bacteria found in the oral cavity appear to be beneficial, helping host cells outcompete pathogenic invaders for nutrients. But occasionally, “microbial communities go rogue,” enabling pathogens to thrive. “As dentists, we see this every day,” said Kumar. “We’re very interested in the damage caused by these [invading] bacteria.”

Another area of research focuses on understanding how microbes are organized within the oral cavity. Accumulating evidence suggests that the structure of this microbiome “is not haphazard or random,” said Boston University’s Salomon Amar. “We don’t have the full picture yet, but we understand that there is [a] first layer of microorganisms that allow for the attachment of the second-comers, the third-comers, the fourth, and so on, in a very hierarchical type of organization.”

All these species must share, along with their human host, limited resources. “We know there is harmony [but also] competition between microorganisms [of the mouth],” Amar said. At any one time, “there might be 200 or 300 species interacting with one another and the host,” added Wade. “Trying to model these interactions is extremely difficult.”

By better understanding the dynamics of how these communities promote health or thwart pathogenesis, Amar added, researchers may one day be able to disrupt the oral microbiome in targeted ways to prevent harmful growth.

Of course, some bacteria that dwell in the mouth move on from the oral cavity, passing with saliva and food further through the gastrointestinal tract, for example, or becoming aerosolized and spreading into the lungs. A recent study showed that the placental microbiome more closely resembles that of the mouth than any other body site, suggesting the oral cavity might also supply the maternal organ with commensal microbes.

While periodontal disease and tooth decay can significantly impact the mouth microbiome, chronic conditions like diabetes are also known to affect this community. And oral bacteria, both commensal and pathogenic, have been found throughout the body, and are associated with diseases at certain sites.

“There’s a lot of evidence linking oral bacteria to distal infections,” said Kumar. “When you think about it, the mucosal surface lining of your gums and mouth . . . there’s a lot of real estate.” So some bacteria may set up shop in the oral cavity, but then leach into other areas of the body, where they can inflict damage.

To date, oral bacteria have been implicated in cardiovascular disease, pancreatic cancer, colorectal cancer, rheumatoid arthritis, and preterm birth, among other things.

Scientists are not yet sure how these species interact to promote health or cause disease. “We are at the embryonic stage and there’ a lot to do to investigate what makes a change from health to moderate to advanced disease,” said Amar.

“We have this tremendous wealth of genetic information on all these organisms,” added Dewhirst. “Going gene by gene . . . it’s going to take a while to really integrate all this information, but I think many, many diseases are going to have links to the [oral] microbiome.”