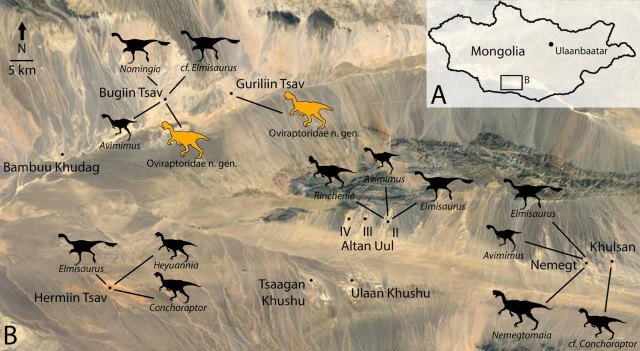 The Nemegt Basin in Mongolia is a hotspot for oviraptorosaurs. The yellow silhouettes represent the known (right) and suspected (left) localities of the new species.GREGORY FUNSTON, UNIVERSITY OF ALBERTAIn 2006, Mongolian customs officials confiscated a slab of rock full of dinosaur bones from a smuggler at an airport. Exactly when and where this specimen had been collected is unknown, but work at the Institute of Paleontology and Geology in Ulaanbaatar has now revealed the poacher’s incredible cargo: the remains of three juvenile dinosaurs, still curled up in the position they died in 70 million years ago.

The fossil trio belongs to a group of bipedal, feather-coated dinosaurs called oviraptorosaurs, known for their bird-like beaks and flashy head crests. According to Gregory Funston, a doctoral student at the University of Alberta who presented this research at the meeting of the Society of Vertebrate Paleontology in August, unique...

Perhaps the most intriguing feature of these new dinosaurs is their posture. Finding oviraptorosaurs buried in a crouching posture is not unheard of, but unlike other individuals who appear to have died while sitting on their nests, these juveniles seem to have been huddled together in a group. Funston suspects this may be the first known case of communal roosting in dinosaurs, with vulnerable individuals snuggling for warmth or protection.

Clues to what exactly happened to these animals in their final moments are held in the rocks in which they were buried, but because these fossils were collected illegally and the location of their discovery was not properly documented, that information is missing. Researchers presume these fossils came from the Nemegt Formation of southern Mongolia, where dinosaur fossils are abundant and poaching is quite common, but it’s difficult to know for sure.

“This is one of those cases where it really does matter that we don’t know where it’s from,” Funston says. “So, it’s really heartbreaking that we can’t really tell what’s going on because we don’t have the rocks surrounding [the fossils].” 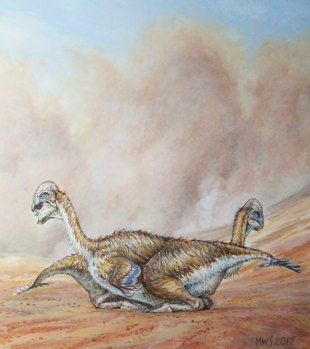 Artwork depicting two of the huddled oviraptorosaurs sitting together in the Late Cretaceous of Mongolia, around 70 million years ago.COPYRIGHT MICHAEL W. SKREPNICK 2017From poached to paleontology

After the fossils were confiscated, the Mongolian government relinquished them to researchers at the Institute, who took to the task of cleaning and preparing the specimens for study. Funston’s doctoral supervisor, Philip Currie, has worked with Mongolian researchers in the past, and knew of this important new find, so he formed a collaboration with the Mongolian paleontologists.

Comparing these fossils to other similar dinosaurs led the researchers to realize that these three specimens are not the only representatives of their kind. A poached fossil of a very young individual seized around the same time as the dino trio and a fully-grown adult from a site called Guriliin Tsav in Mongolia both represent the same species. Together, these five fossils provide an ontogenetic series, a range of ages, allowing researchers to investigate how the animals changed as they grew, including the growth of their head crest and the gradual development of a fused tail structure called a pygostyle, which adults likely used to support attractive tail feathers.

Unfortunately, the effects of poaching impede investigations of the dinosaurs’ development as well. When the juvenile fossils were collected, their protective plaster jacket was constructed improperly. About half of the jacket cannot be removed without destroying the fossils beneath, meaning parts of these skeletons will likely never be seen. What’s more, the tails of the juveniles—an essential intermediate stage in the formation of the adult pygostyle structure—were cut off.

“It’s one of those rare feelings where you just can’t stop thinking of all the questions you could ask,” Funston says. “They have so much information about growth and development and the behavior that’s being represented. And then to see that violated by poachers is tough.”

Currie is no stranger to the problems of poached fossils. He has a long history of working to make sure smuggled specimens go back where they belong, such as in the recent case of Baby Louie, a dinosaur embryo illegally transported to the United States. Research on this fossil was put on hold for years while museums and governments worked out the details of its repatriation to China.

Currie was also involved in the repatriation of a poached fossil with a more unfortunate history: the infamous hoax fossil “Archaeoraptor.” Not only was this specimen illegally collected from China, it was ultimately revealed to have been chimerically cobbled together from multiple species, but only after receiving a very public celebration in 1999 in the form of a National Geographic article that was later very publicly retracted. The damage in this instance was dealt not only to the fossil, but to the public image of paleontology.

Recent investigations have identified more than 18 smuggled dinosaur specimens from Mongolia, including a Tarbosaurus skeleton that had sold at a Texas auction for nearly $1 million and another that had been sold years earlier to actor Nicolas Cage for $276,000.

In both of those cases, the fossils were collected and sold by farmers, a common practice in China. Unfortunately, Currie explains, it can be difficult to get solid information about such fossils, because the farmers are protective of their collecting areas and because what they’re doing is illegal. This can leave paleontologists lacking important information on where the fossils came from, how they were collected, and what alterations they may have accrued in the process. “It’s a real bugaboo, of course, to work with that kind of stuff,” he says.

Smuggling has led to a shift in paleontological practice. These days, “[researchers] generally are not working with specimens unless they are in some kind of a public collection, and unless the legal status of the specimen is clear,” Currie says. Not only does this help ensure the fossils are kept secure, it’s also a way for researchers to avoid the risks of dealing with illegal specimens, which can land them in legal trouble and possibly damage their relationships with foreign scientists and governments.

Junchang Lü of the Chinese Academy of Geological Sciences, who helped Currie find a home for Baby Louie at the Henan Geological Museum, explains that poaching is common in northern China and Mongolia partially because the tree-less landscape of deserts and badlands makes it easy to find and excavate fossils. Essentially, the same conditions that make those areas ideal for paleontologists also make them ripe for illegal activity.

“For us, it’s very good, we can get more information,” Lu said, “but [poachers] destroy the information.” It is not uncommon for paleontologists working in these countries to find their sites ransacked between dig seasons, their efforts undermined for the fossil black market. 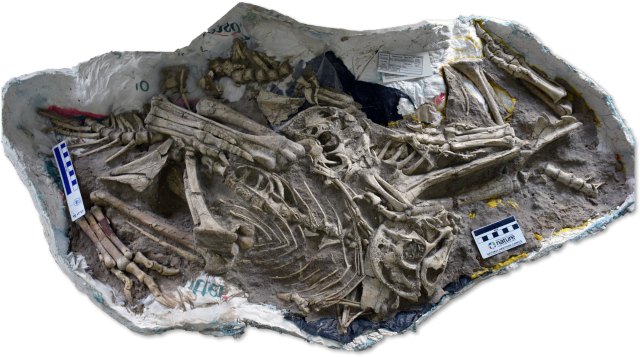 This poached block of sediment contains partial remains of three huddled dinosaurs. The slab is currently housed at the Institute of Paleontology and Geology in Ulaanbaatar.GREGORY FUNSTON, UNIVERSITY OF ALBERTA

From poached to repatriated

The issue of Mongolian fossil poaching hit the public scene in a big way in 2012, when then-president of Mongolia, Tsakhiagiin Elbegdorj, attempted to retrieve a stolen Tarbosaurus bataar skeleton from a Texas auction house. The situation spawned a legal case that resulted in the arrest of fossil smuggler Eric Prokopi and the return of dozens of poached fossils to Mongolia.

According to Robert Painter, the lawyer who worked with the Mongolian government to return the Tarbosaurus, there is very little legal background regarding fossil poaching, despite it being a long-running problem in the paleontological community. “Frankly, until I got asked to get involved . . . I had no idea that it was really a problem,” he says. “There is really no such thing as a fossil-poaching legal expert, at least to my knowledge.”

The fossil black market is extensive and often lucrative, attracting wealthy private collectors. In the years following the Tarbosaurus case, legal investigations identified more than 18 smuggled Mongolian dinosaur specimens in the hands of various collectors, including that first Tarbosaurus skeleton, which had sold at the Texas auction for nearly $1 million before its confiscation, and another that had been sold years earlier to actor Nicolas Cage for $276,000. All of these were ultimately returned to Mongolia.

The repatriation of Mongolian fossils from the United States has been facilitated in large part by the Institute for the Study of Mongolian Dinosaurs (ISMD), whose executive director Bolortsetseg Minjin is focused on changing the attitudes of not only the Mongolian government, but the country’s citizens as well.

“The most challenging aspect is economic and political instability in Mongolia,” Bolortsetseg says in an email. “Many Mongolians struggle to meet their basic needs and they understandably show little interest in dinosaurs or fossil preservation.” She adds that while it has become more difficult in recent years for foreigners to buy and sell Mongolian fossils, this black market still exists and could easily see a resurgence in a struggling economy.

“In 2013, when that Tarbosaurus bataar made international news, a lot of Mongolians started hearing about Mongolian dinosaurs for the first time,” says ISMD board member Thea Boodhoo. “And when it finally got repatriated, a lot of them got the chance to see it.”

The ISMD is trying to make the most of that public awareness by establishing a sense of national pride in Mongolian dinosaurs, says Boodhoo, with plans to construct regional museums near fossil sites. The institute’s hope is that this will provide boosts to community engagement, education, and local economies.

“When we teach them about the dinosaurs that come from, basically, their backyards, the kids and their teachers and their parents and everyone in the community starts to get a sense that, hey, this is ours, it’s something that is of value to our community,” Boodhoo says. She also hopes these efforts will inspire children to eventually join the sparse ranks of Mongolian paleontologists.

“I’d say in the last five or six years, we actually have made a lot of progress [combatting poaching],” Currie says. He notes that the governments of the United States, China, Mongolia, Argentina, and elsewhere have enacted stricter laws cracking down on fossil poaching and facilitating the retention (or return) of fossils within their countries of origin. What’s more, scientific organizations including the Society of Vertebrate Paleontology have passed ethics statements stressing proper conservation of fossils and adherence to government policies regarding fossil management.

“People are actually talking about these things,” Currie says, “which I think is really important.”

Clarification (September 10): The article has been updated to clarify that Bolortsetseg Minjin is the executive director of ISMD.