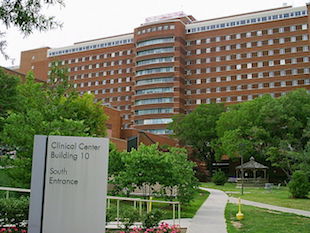 NIH Clinical Center, Bethesda, MarylandWIKIMEDIA, CHRISTOPHER ZIEMNOWICZHundreds of thousands of people suffer from an illness that causes them to feel overwhelming fatigue that doesn’t improve with rest, joint and muscle pain, problems sleeping, and mental fogginess, all of which can severely disrupt their lives. Known as myalgic encephalomyelitis (ME) or chronic fatigue syndrome (CFS), the condition affects more than 1 million people, according to the US Centers for Disease Control and Prevention, representing an economic burden of up to $7.2 billion.

For decades, physicians and scientists dismissed what’s now typically called ME/CFS as trivial or psychosomatic, a fact not helped by its unknown cause and broad set of associated symptoms. Meanwhile, diagnostic tests and treatments have remained out of reach.

But last fall, the National Institutes of Health (NIH) announced an effort—prompted by an Institute of Medicine report—to reinvigorate research on what NIH Director Francis Collins...

“Historically, the NIH has ignored this illness for a long time, and that’s caused lot of resentment and suspicion in the patient community,” Brian Vastag, a journalist who has ME/CFS, told The Scientist. “Now I’m convinced that the NIH has turned the corner.”

Although cases of ME/CFS have been reported for decades, federal health agencies only started studying the condition in the 1980s, following an outbreak of the mysterious illness in Incline Village, Nevada. The US Centers for Disease Control and Prevention (CDC) convened a working group in 1987, which concluded that the disease was not new, and named it “chronic fatigue syndrome,” a move critics say has prevented medical experts from taking the illness seriously.

In her 1996 book Osler’s Web: Inside the Labyrinth of the Chronic Fatigue Syndrome Epidemic, journalist Hillary Johnson called out government health agencies for neglecting the disease. In researching the book, “it became apparent to me that the Centers for Disease Control and the National Institutes of Health took a position early on that CFS was a malady manufactured by neurotics and hypochondriacs,” Johnson said in an interview accompanying the publication’s release.

During the past few years for which data are publicly available, the NIH has been awarding between $5 million and $7 million in funding for ME/CFS research annually, according to NIH estimates. Collins’s October 2015 announcement signaled a greater agency-wide commitment to the disease.

“I think everybody understood the message from Dr. Collins that this was intended to be a reinvigoration” of efforts to understand ME/CFS, Joseph Breen of the National Institute of Allergy and Infectious Diseases (NIAID) told The Scientist. “Historically, there was [ME/CFS-related] work that went on at NIH, but this is a substantial new commitment,” added Breen, who is part of the NINDS-led working group.

The NIH intramural study, which is led by Avindra Nath of NINDS, will examine a suspected viral and/or immunological cause of ME/CFS and is slated to involve around 40 patients and 40 healthy controls. The protocol has undergone a number of amendments since its approval, Nath said.

“We made the criteria as stringent as possible,” he told The Scientist. “We want to study . . . individuals who developed ME/CFS after a clear-cut infectious process.” To participate, patients must have experienced a recent viral infection, and have been ill for at least six months but not more than five years.

The investigations will complete a detailed medical history on each patient—to rule out other conditions—and perform brain scans, blood analysis, immune profiling, spinal taps, and an exercise-based evaluation. Nath said he expects these processes will take at least one week per patient. “My guess is we will probably see the first publication about three years from the time of enrollment [in the trial],” he said.

Meanwhile, the working group has released a notice soliciting applications from already-funded investigators for supplemental support to expand existing projects related to ME/CFS. The group has also released a Request for Information seeking feedback from disease stakeholders about research priorities. At its last council meeting, the group received approval to create an ME/CFS research consortium, NINDS Director Walter Koroshetz told The Scientist.

The group is also in the process of allocating funding for new extramural proposals related to ME/CFS. None of the officials The Scientist spoke with could provide details on how much money would be set aside; the funding announcement is expected to be released within the next couple of months.

ME/CFS advocacy groups have called for the NIH to devote as much as $250 million per year to the disease. This figure is often compared to the funding for multiple sclerosis, which amounts to around $100 million in NIH support annually.

“One of the NIH’s primary long-term goals with respect to ME/CFS is to grow the research field,” working group member Vicky Whittemore of NINDS wrote in an email to The Scientist. “We will need to work together and make careful decisions in order to make the best use of taxpayer dollars for research on ME/CFS.”

“Everybody in the patient community is waiting to see how much money going to put into extramural funding,” said Vastag.

In the interim, he is encouraged by the progress to date. “In the NIH, for 30 years there’s been a sign [affixed to ME/CFS] that said ‘Don’t go there,’” Vastag added. “That’s finally coming down.”