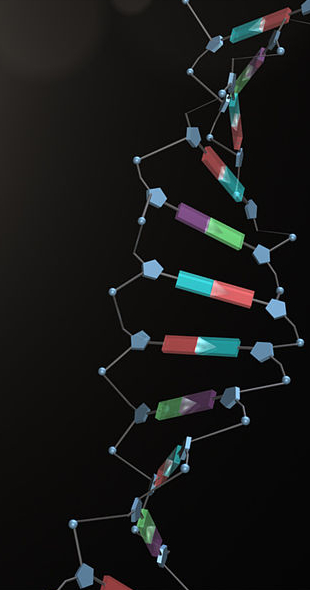 WIKIMEDIA, JFANTASYThese days, it often seems like science is catching up with fiction. Three years ago an entire genome was transplanted from one bacterium to another. Later, the same technique was used to kick-start an enucleated cell by supplying it with a manmade genome, showing that life can be artificially assembled in the lab. Now, researchers are aiming to rewrite the genetic code altogether, changing the amino acids specified by various DNA triplet codes, a relationship thought to have been fixed by years of evolution.

“To make proteins with more than 20 amino acids—possibly as many as 30 or 40—requires thinking outside of the box of the standard genetic code,” said molecular biologist Patrick O’Donoghue from Western University, Ontario, in an e-mail to The Scientist. “We now know there are ways to skew the competition between molecules in the cell so that many codons can take on entirely new...

There are several advantages to rewriting the genetic code. Proteins are often modified in ways that are critical to their functions, and the process of introducing these modifications in  medically or commercially relevant human proteins made in bacteria can be tedious and inefficient. Recoding a DNA triplet to code for a novel amino acid, one already carrying a desired modification, could serve to eliminate this extra step in vitro. Recoding would also be a boon for laboratory research and biotechnology: novel amino acids, such as those carrying a fluorescent tag, could be inserted and used to track cellular processes, for example.

Moreover, because the genetic code is largely the same across all life, many organisms can take up foreign DNA and decode it. Viruses are the biggest exploiters of the near-universal code, hijacking a host’s entire gene-decoding system. By recoding the genes of bacteria used in industrial production of enzymes, hormones, and food products, researchers can stonewall the viruses, saving tons of material that goes to waste from viral contamination. In an October Science paper, for example, researchers reported that, by reassigning the triplet TAG to TAA and eliminating a release factor in E. coli, they could heighten the bacterium’s ability to resist viral infection from the bacteriophage T7.

“By changing the code, we engineered viral resistance,” said coauthor Farren Isaacs from Yale University. “It was great.”

Although there are more than 100 amino acids in nature, typically fewer than two dozen are encoded by the DNA of an organism. However, the nature of this biological language is redundant: a total of 61 codons specify 20 amino acids, meaning more than one triplet code specifies the same amino acid. This gives researchers the ability, in theory, to reassign certain triplet sequences to a novel amino acid.

“I like to use the metaphor of an alphabet to which more than the regular 26 letters are added,” molecular biologist Markus Broecker of Yale University said in an e-mail. “The same could be said about proteins engineered to contain more than the canonical 20 amino acids.”

But adding letters isn’t easy. Although the system is inherently redundant, the code is often considered “frozen,” a term originally coined by Francis Crick. Having evolved over millions of years, the code is fixed, and any tinkering could spell disaster for the cell. “While recoding, we are constantly interfering with the quality control of protein synthesis,” said Yale molecular biologist Dieter Söll.

“Any modification done in synthetic biology might lead to a loss of this present optimal behavior,” agreed science historian Michel Morange at the École Normale Supérieure in Paris.

To avoid catastrophe, early work has focused on the stop signals, TAA, TAG, and TGA, which don’t already encode any amino acids and are thus available for recoding. In fact, they are occasionally recoded in nature. For example, TGA sometimes codes for selenocysteine (sec) in some organisms, including humans, while TAG signals the addition of a pyrrolysine in certain archaeabacteria.

A stop signal can be converted to a “sense” signal if a transfer RNA (tRNA) molecule is available to decode it. However, the release factor normally signalled by the codon to terminate translation still recognizes it and competes with the engineered tRNA, reducing the amount of protein that can be generated with the desired amino acid.

In 2010, Kensaku Sakamoto’s group at the RIKEN Systems and Structural Biology Centre in Japan thought of a solution: to convert all the TAG stop codons in seven essential Escherichia coli genes to another stop signal (TAA) and supply a tRNA that inserts glutamine when it encounters TAG. This allowed the researchers to completely eliminate the release factor RF1 that normally responds to the TAG signal, without hindering protein synthesis termination of these key genes.

The technique was successful, and the authors were able to repeat the experiment, this time assigning TAG to the novel amino acid iodotyrosine. The bacteria weren’t completely unscathed, however: the manipulated genes produced proteins that truncated appropriately, but the remaining genes in the E. coli genome that ended with TAG were often “read through” in the absence of RF1.

To overcome this hurdle, a team led by George Church from Harvard Medical School and Yale’s Isaacs turned to a technique they developed two years ago to efficiently remove targeted triplet signals across the genome. The researchers changed all the TAG stop signals in E. coli to TAA, then deleted RF1. Publishing the results in the aforementioned October Science paper, they called the resulting bacterium a genomically recoded organism (GRO). As a proof of concept, the team reassigned TAG to a pre-phosphorylated serine—an important modification found on serines of the recombinant human growth hormone produced to treat various growth abnormalities. “We are very excited about it,” said Isaacs. “This GRO is a living foundry for making new materials.”

In both systems, however, the bacteria grew significantly slower than wild-type populations, suggesting that genetic manipulations are still, in some way, harming the cells. “The real challenge is to engineer recoding systems that are comparable in efficiency with the natural tRNAs and tRNA aminoacylating enzymes in the cell,” said Söll. “Then we have a perfect system.”

While recoding stop codons is a big step forward, it is naturally limited to just three triplet signals. To carry out large scale engineering of new genomes, researchers must turn to the many redundant sense codons in the language of life.

This fall, a group led by Harvard’s Church announced its success in doing just that, having removed all traces of 13 sense triplets from 26 essential genes in E. coli. Another recent study, conducted by Söll’s group at Yale along with Church and O’Donoghue of Western University in Canada, accomplished a similar feat, exploiting the natural machinery that directs specific TGA stop signals to be decoded as sec. They then set out to reassign each of the other 63 codons in turn to sec. The experiment was wildly successful. The researchers recoded 57 more codons—including the two other stop codons—to sec at a single site, without interfering with the synthesis of other proteins in the cell.

“The most astonishing finding was that, by the technically simple measure of changing just a codon and anti-codon, one can extract a whole second meaning from the genetic code,” study coauthor Broecker said in an e-mail to The Scientist.

Not so frozen after all

In addition to these successes in cellular engineering, researchers are continuing to uncover more and more variation in the genetic codes of natural organisms, suggesting that the code may be less fixed than once believed. Last year, for example, Söll and O’Donoghue discovered that the archaeabacterium Acetohalobium arabaticum modulates the size of its genetic code in response to its environment, expanding from 20 to 21 amino acids with the addition of the amino acid pyrrolysine when grown in the presence of the compound trimethylamine, a nitrogenous compound produced during the decomposition of plant and animal matter.

Fungi of several genera, including the human pathogen Candida, also appear to variably interpret the code. Some 97 percent of the time, Candida adds a serine at the CTG sense codon, only occasionally incorporating the more common CTG-coded amino acid of leucine. Such imperfection in the system may be one way that new amino acids are added to the code, suggested Manuel Santos from the University of Aveiro in Portugal. Indeed, earlier this year, Santos, along with collaborators from Spain and Italy, enhanced leucine incorporation in Candida albicans and uncovered a range of new phenotypes, including increased resistance to the antifungal fluconazole.

Santos proposed that such ambiguity may have been selected for its ability to generate phenotypic diversity. “Despite the fact that codon ambiguity is disruptive, the phenotypic diversity it produces is sufficient to maintain that ambiguity,” he said, “allowing for selection of ambiguous codons and eventual identity change.”