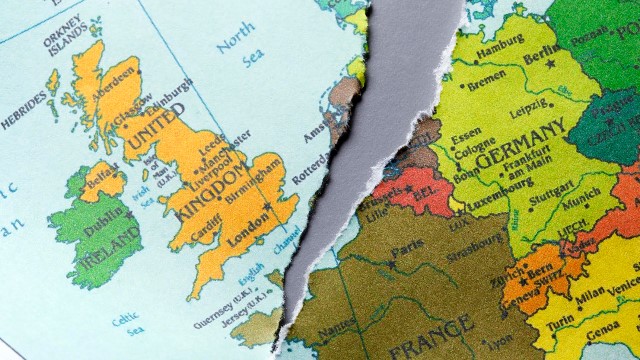 ISTOCK, DNY59On June 23, 2016, the UK electorate voted 51.9 percent to 48.1 percent to leave the European Union. As a community, scientists were overwhelmingly opposed to leaving: a Nature poll from March of that year showed that 83 percent of UK researchers were pro-remain, and only 12 percent pro-leave—the rest being undecided.

As Britain tries to work out the details of its exit, or Brexit, U.K.-based researchers speak to The Scientist about what the referendum result has meant for them.

A blow to collaboration

“It’s thrown a spanner in the works.”

A British and Australian passport holder, Tom Johnstone, the head of brain imaging at the University of Reading, credits the U.K.’s “top notch” research university system as a major factor in his decision to settle in England a decade ago. But a year on from the referendum, he’s already seeing...

The result has complicated a multi-institution grant consortium that Johnstone has been working on for years to secure funding for doctoral training and research in neuroscience. Due to uncertainty about the U.K.’s post-Brexit capacity to admit overseas EU PhD students—a prerequisite for the grant—the group’s application has now been reworded so that a German institution, not the University of Reading, will take the helm. “It was felt there was a bit too much risk in having us as the lead institution, given the uncertainty,” he says.

Johnstone is now considering whether he himself ought to move before March 2019. Although the British government promised to underwrite EU research projects, “in my field, we need larger scale grants, [which] need more input and more institutions involved,” he says. “It’s at the point where the uncertainty makes you think you’d rather opt for safety and know you’re going to be in the system, rather than hope you’ll be in the system in a few years’ time.”

A loss of leadership

“It’ll be about damage mitigation.”

Almost immediately following the vote, Alison Smith, who leads the plant metabolism group at the University of Cambridge, stood down from her position as the coordinator of a European research consortium set up to explore the applications of plant and microbial research in biotechnology.

“After the referendum result, it was quite clear that I couldn’t be the frontperson for it,” Smith tells The Scientist, adding that lobbying funders for research money would seem inappropriate given the unclear future of UK involvement in European projects. “It was not clear what the status of the U.K. would be going forward. So I ruled myself out.”

Since then, Smith says, she has been fortunate—her collaborations with Europe go back years, and her colleagues have been encouraging. “They’re very positive,” she says. “They keep saying, ‘Don’t worry, we want you to be part of our consortium.’ So from a personal level, it’s not an issue.” But she’s concerned for people pursuing new collaborations—something she has decided not to do. “There is a risk now with UK partners, so I think many new initiatives would be awkward.”

As a UK citizen and close to retirement, Smith is not planning to emigrate, although the idea crossed her mind, she says. She hopes the U.K. will be able to mitigate the damage of Brexit on British science, and avoid losing its influence over research priorities. As U.K.-based researchers, “you can’t have a meeting where people get together to decide [if] there should be funding in a particular aspect of biology when it’s not clear that the U.K. will be participating.”

An increased risk of isolation

“No one really knows what’s going to happen.”

A Greek national and a lecturer in cyber security at Westminster University, Antonis Michalas has worked around the world on network security, in settings from electronic voting to healthcare systems. After moving to the U.K. two years ago, he received several European grants, and says the advantages go well beyond funding. “You get the opportunity to meet and collaborate with other people around Europe,” he says. “You learn from their expertise, they learn from your expertise, and you come up with novel ideas.”

Since the referendum, Michalas has had mostly positive interactions with European partners, although one proposal was dropped after collaborators on the continent expressed skepticism about the funding prospects for a project with UK involvement. But he’s not sure how long the opportunity to collaborate will continue after Brexit. “What I’m afraid of is that we will be isolated in the U.K.,” he says.

With such unpredictability, early-career academics feel pressured to start making plans, even before Brexit takes place, he adds. “To find an academic job, you need some time,” he says. “You can’t submit an application today and get a job next week or next month. It takes six months up to a year.” It’s a prospect Michalas views with sadness. “It’s not nice,” he says. “I would like to stay where I am, create a team, have a normal academic life. I’m not happy to move away and start all over again.”

An excuse for hysteria

“I don’t see it being the disaster everyone’s predicting.”

Not everyone sees Brexit as a blow for science. Angus Dalgleish, a professor of oncology at St. George’s, University of London, stood as a candidate for the United Kingdom Independence Party—political frontrunners of 2016’s Leave campaign. He puts the negativity among the scientific community down to hysteria. Regarding the future of UK research, he says, “I don’t think it’s as bad as my colleagues would like to say.”

UK researchers currently collaborate with institutions both inside and outside the E.U., Dalgleish notes—a situation that need not end with Brexit. “My best European collaborations over the past few years have been with Norway,” he says. “Norway is not in the E.U., but we’ve had very good cofunding.” And because immigration controls should be aimed primarily at “unskilled laborers,” Dalgleish argues, British universities will still be able to attract just as much talent after Brexit as before. “Scientists are like fish—they swim where the best opportunities are,” he says.

As for researchers experiencing difficulty maintaining the lead in collaborative EU projects, Dalgleish suspects that these situations are likely rare, and transient, being linked to current uncertainty. “I think once it’s all settled, it will all go back to how it was,” he says. “At the end of the day, people are very rational. They will do whatever’s best.”