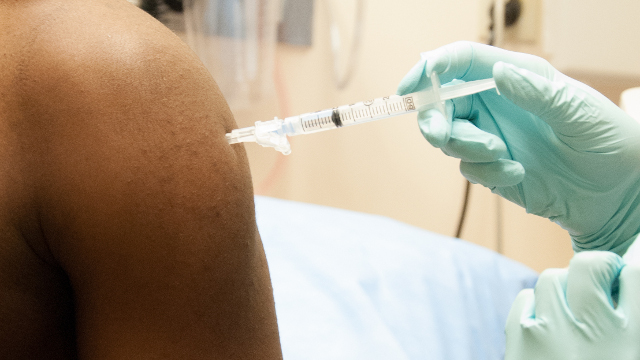 A study participant receives a dose of the investigational NIAID/GSK Ebola vaccine at the NIH Clinical Center in Bethesda, Maryland. FLICKR, NIAID

A small biotech company in Atlanta, GeoVax has been making slow but steady progress on an HIV vaccine since 2001. Its modified vaccinia virus Ankara (MVA) vector is based on an attenuated smallpox vaccine that was safely given to more than 100,000 people in the 1970s. Now, with clinical trials for its HIV vaccine well underway, GeoVax is responding to the Ebola epidemic by adapting its proprietary MVA vector to produce virus-like particles that carry the Ebola virus glycoprotein.

“Right now, when we’re doing the design of the vector, really it’s the talent that you have in-house that’s more important than head count of people. And it doesn’t necessarily take a whole lot of money either,” said Robert McNally, the president and CEO of GeoVax, which has...

The firm is now gearing up for preclinical testing in animals; McNally said he expects the vector to be ready for clinical trials in 15 to 18 months—putting GeoVax well behind several other companies working to develop Ebola vaccines.

Baltimore-based Profectus BioSciences, for example, has already shown that its modified vesicular stomatitis virus (VSV) vaccine can protect nonhuman primates from Ebola infection. Profectus has filed an investigational new drug (IND) application with the US Food and Drug Administration (FDA) and plans to begin Phase 1 clinical trials in mid-2015, according to the company’s chief scientific officer, John Eldridge.

A different VSV-based vaccine licensed to NewLink Genetics by the Public Health Agency of Canada is currently in Phase 1 trials in the U.S., with more trials planned in Europe and Africa. Some large pharmaceutical companies are also rising to the challenge: GlaxoSmithKline (GSK) has initiated several clinical trials to test an Ebola vaccine that uses an adenoviral vector created in partnership with researchers at the US National Institutes of Health (NIH), while Johnson & Johnson is working with the same agency to test of its MVA-BN Ebola vaccine in early 2015.

“People ask us, ‘Why are you guys doing this now, when you have all these people in front of you?’” said GeoVax’s McNally. “Our answer is: in the world of vaccines, we know from experience, it takes a lot of tries to get it right. It doesn’t happen overnight, and no one group is going to have the perfect vaccine.”

GeoVax has submitted grant proposals to the NIH and the US Department of Defense (DoD) to secure additional funds for its Ebola R&D efforts and, as a publically traded company, may also sell stock to raise more capital, McNally said. Profectus has already secured more than $30 million in US government contracts to develop its VesiculoVax platform; last week (October 31), the company announced a $9.5 million deal with the DoD for the manufacturing and clinical testing of a trivalent vaccine against two Ebola strains and Marburg virus. GSK continues to work closely on clinical trials with the NIH Vaccine Research Center (VRC) and the Jenner Institute at the University of Oxford in the U.K., with funding from an international consortium that includes the Wellcome Trust and the U.K.’s Department for International Development.

This accelerated progress toward a vaccine to protect healthy people from the deadly virus was built on investments and R&D groundwork that were in place well before the current epidemic began.

In May 2013, GSK acquired the Italian vaccine development company Okairos, which had already spent several years researching vaccines against Ebola and a half-dozen other diseases. “That did put us in a good position to really begin work in earnest when the [Ebola] outbreak happened in West Africa,” said GSK spokesperson Mary Anne Rhyne.

Profectus’s interest in an Ebola vaccine goes back even further, to collaborations with US government researchers that began in 2007. And for the past three years, the company has presented promising results from animal tests to the Biomedical Advanced Research and Development Authority (BARDA) of the US Department of Health and Human Services. “But up until recently, Ebola outbreaks were viewed as rare events that happened sporadically with little potential to be spread into large urban areas,” said Eldridge. For the last several years, federal funding agencies “thanked us and said, ‘Sorry, it’s just too low on our priority list. There are other things that are deemed to be higher threats.’”

Still, by some estimates, even these gradual advances toward an Ebola vaccine would have been unthinkable without considerable public investments in biodefense after the terrorist attacks of September 11, 2001. Although the changes were prompted by bioterrorist threats such as anthrax, the applicability of new biosafety level 4 (BSL-4) labs and other efforts evolved quickly: “It’s become a cliché, but nature is the most effective bioterrorist,” explained Samuel Stanley, president of Stony Brook University in New York, who led the Midwest Regional Center of Excellence for Biodefense and Emerging Infectious Diseases Research in St. Louis, Missouri, from 2003 to 2009.

“We’re very fortunate to be at this stage where we can talk about fast-tracking, where we can talk about Phase 3 trials, because of the investments that were made after 9/11,” said Stanley. “It normally takes decades to get a product from an idea, or from a recognition of an antigenic protein or anything else in somebody’s laboratory, to something that’s actually a vaccine that can go into clinical trials.”

The Ebola epidemic has led government agencies to scout potential relationships with pharmaceutical and biotech companies and set up contracts to expedite the manufacturing and testing of diagnostics, vaccines, and treatments. Under its “fast track” program, the FDA is “reaching out proactively to multiple medical product developers to clarify regulatory requirements, provide input on pre-clinical and clinical trial designs . . . and expedite review of data as they are received from product developers,” an agency spokesperson told The Scientist in an e-mail.

“Rather than just supporting the basic research, [government agencies] really extended into the idea of starting to fund small companies, particularly [those] that were willing to take these things on . . . to the next level,” said Stanley. “It has been a bit of a paradigm shift, and it’s more expensive . . . I think we’re seeing now the potential payoff of that strategy.”

Even if one or more of the Ebola vaccines reach Phase 3 trials and are found effective in the face of this public health emergency, standard regulatory approval will require more conventional clinical trials. “Just because we get into humans that are at risk doesn’t mean that we’ve got approval,” said McNally. “What it means is that [government agencies are] reacting to the epidemic, allowing companies to treat individuals. It’s going to be hard to take data in an uncontrolled environment.”

For now, producing enough vaccines for clinical testing represents a significant bottleneck. Participants at a recent World Health Organization (WHO) meeting on the matter stated that “funding issues should not be allowed to dictate the vaccine agenda,” but noted that logistical challenges could still limit vaccine production capacity. And there’s risk in ramping up manufacturing ahead of safety trials. In its request to the FDA, Profectus proposed “doing things in parallel, with the full knowledge that if the preceding [good manufacturing practices] step fails . . . you have to throw everything away,” said Eldridge. “So we put forth a manufacturing plan that cut the actual manufacturing time to bare bones, trading financial risk for time.”

GeoVax plans to outsource the manufacturing of its potential MVA vaccine, and will consider licensing the technology behind it to a company that can produce the vaccine in a continuous cell line, instead of slow-growing chicken eggs. GSK is scaling up production of its adenoviral vaccine at facilities in Italy and Belgium, and expects an output of 230,000 doses by April 2015.

“I hate to say it, but sometimes you need an epidemic to get people’s attention. And then they’re willing to fund things,” said McNally. Although often neglected by large pharmaceutical companies, “infectious diseases remain a tremendous threat—not just to our country, of course, but to the world, as we’re learning,” added Stanley. “And now an outbreak in West Africa is our problem . . . I’m really glad we have some products to look at. Right now the world is crying out for it.”