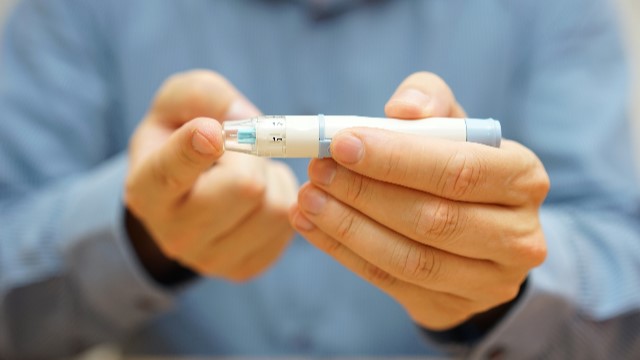 Update (November 26): Verily has paused development of its glucose-sensing contact lens. The company, formerly Google Life Sciences, acknowledged in a statement earlier this month (November 16) that “there was insufficient consistency in our measurements of the correlation between tear glucose and blood glucose concentrations to support the requirements of a medical device.”

In the early 2000s, a long-standing problem affecting diabetes sufferers around the world seemed on the brink of being solved. After years of research and development, a needle-free device to measure a person’s blood glucose levels was coming to market—a game-changer for patients fed up with the messy and painful procedure of the blood-drawing finger-prick test.

Worn like a wristwatch, Cygnus Incorporated’s GlucoWatch G2 Biographer used weak electric currents to draw glucose from interstitial fluid just under the surface of the skin into an “autosensor.” There, the sugar was oxidized by an enzyme, resulting...

Approved by the US Food and Drug Administration (FDA) in 2002, the device was intended to provide regular, painless measurements and, at least initially, complement, rather than entirely replace, the finger-prick test used by both type 1 and type 2 diabetics. Nevertheless, the excitement was tangible. The Daily Mail labeled the device “a wristwatch to ease diabetes.” The acting principal deputy commissioner of the FDA called the technology “one of the first steps in developing new products that may one day completely eliminate the need for daily finger-prick tests.”

Within months of its release, however, the GlucoWatch gained a bad reputation. Patients reported painful rashes where electrical currents irritated the skin, and the device’s three-hour warm-up time was impractical. It soon became clear the data were unreliable, too. One 2004 study found that for a range of sensitivity settings, the false-alarm rate for low glucose levels was consistently higher than 50 percent and the device often missed real glucose dips altogether.

Noninvasive is the dream. But to my knowledge, no company has yet reached it.

By 2007, the GlucoWatch had gone out of production, and Cygnus had been acquired by Animas Corporation (which itself was later acquired by Johnson & Johnson); Animas ended customer support for the device in 2008.

Despite promises from many companies, no product has taken its place. Still, noninvasive glucose monitoring remains “the holy grail” in the field, says Lutz Heinemann, CEO of diabetes consulting firm Science and Co. “Noninvasive is the dream,” he says. “But to my knowledge, no company has yet reached it.”

It’s not for lack of interest. The market is huge—and growing. Diabetes affects more than 30 million people in the U.S., and consulting company Frost & Sullivan has projected that the diabetes monitoring market will increase from a current value of around $10.71 billion to $14.68 billion by 2022. Chasing after this potential payout, dozens of companies have attempted to develop noninvasive glucose monitors, but all have failed to make the cut, sending many companies into bankruptcy. The latest array of experimental products employ technologies that range from infrared spectroscopy to measure glucose concentrations though the skin, to patches designed to monitor sugar levels in sweat, but whether any will prove an accurate alternative to the traditional finger prick remains to be seen.

Measuring blood glucose is hardly trivial. The sugar is small, colorless, and present at miniscule concentrations. Mean levels for humans are around one gram per liter of blood, or roughly 5 grams in the whole body. Levels are considered dangerous below about 70 mg/dL (hypoglycemic)—a risk for diabetics taking insulin, for example—or if regularly above about 130 mg/dL (hyperglycemic). 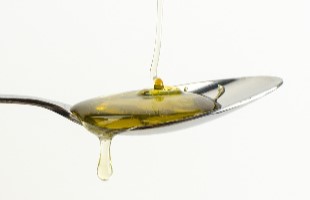 An average person has less than a teaspoon of glucose circulating in the blood.PIXABAY, B3R3N1C3Distinguishing these relatively tiny changes against a backdrop of water, cells, and many other circulating metabolites is a fiendishly difficult problem. Even devices that measure glucose directly in blood or other fluids have to circumvent the interference using, for example, glucose oxidase (as was the case for the GlucoWatch and, indeed, most finger-prick tests) or other enzymes to trigger secondary reactions that are more measurable. But for truly noninvasive techniques, this background noise becomes a cacophony.

More frustrating still, this ratio only gets more skewed as glucose levels slip lower. And while an error of, say, 20 percent might be acceptable for a device measuring the upper end of a patient’s glucose range, a lack of sensitivity to variation at low levels could be fatal. “As you get lower and lower glucose levels, you have less and less signal, so it gets harder and harder to measure,” says Rice. “It’s the opposite of what you need.”

An assortment of approaches

Despite the formidable challenges, numerous companies have tried in the last 40 years to produce a needle-free solution with enough precision to provide medical value. One noninvasive technique that has seen many iterations is spectroscopy, which measures how light or other electromagnetic waves interact with thin layers of tissue, such as the skin between the finger and the thumb, or an earlobe, in order to infer its contents. Though varied, glucose-monitoring methods using spectroscopy are notorious for low precision due to the complexity of the tissue reflecting, absorbing, or being penetrated by the waves, and the difficulty of distinguishing the sugar signal from everything else.

Until recently, Pennsylvania-based biotech LighTouch Medical was touting an experimental device that used near-infrared spectroscopy to measure blood glucose in human fingertips (the company’s website has now been taken down). Meanwhile, Glucosense Technologies, a spinout from research at the University of Leeds in the U.K., was developing a device that measured near-infrared fluorescence triggered by a low-powered laser directed at the skin. But by mid-2017, this company, too, had disappeared, having been “dissolved after it had reached a go/no-go point and failed to replicate its initial in vitro results,” writes Laura Thornton of Glucosense funder NetScientific in an email.

Also pursuing electromagnetic approaches are Israeli companies GlucoVista, using infrared, and Integrity Applications, makers of an earclip device called GlucoTrack that, according to its website, deploys “three independent technologies simultaneously: ultrasonic, electromagnetic and thermal.” Neither company responded to requests for more information, although GlucoTrack is listed as approved for sale in Europe and is apparently available from distributors. A third Israeli device maker, OrSense, tells The Scientist it dropped its glucose-monitoring research—which had used light-based “occlusion spectroscopy” to infer glucose levels from a probe slipped onto the thumb—but would not elaborate further.

London-based MediWise, meanwhile, uses radio waves to detect glucose levels across thin sections of tissue. “It’s using a very different technology” to those being investigated by other companies, notes MediWise CEO George Palikaras, relying on specially designed nanocomposite films that that make the skin “transparent” to radio waves. Having recently published data from a 10-person trial on the “GlucoWise” device’s performance detecting glucose spikes in healthy humans, the company is now eyeing a 2018 date in the U.K. for pre-orders—delayed from 2016. Already-collected data on detecting hypoglycemia is forthcoming, Palikaras adds, and the company plans further trials with diabetes patients.

Other techniques, such as that employed by the GlucoWatch, extract sugar for a more direct measurement. London-based Nemaura Medical is developing sugarBEAT, a wearable patch that uses weak electrical currents to draw glucose from interstitial fluid. “We’re essentially filtering the analyte through the skin,” company CEO Faz Chowdhury tells The Scientist. With one clinical study already completed, “we’re currently in the process of another clinical program.” The original 2016 UK launch date has been postponed to late 2017—partly because the company is working on miniaturizing the currently bulky equipment, he adds.

Another approach is to work with external fluids. For example, researchers from a high-profile collaboration between Google and Novartis announced in 2014 that they are developing a “smart contact lens” to measure glucose concentrations in diabetes patients’ tears. Initially scheduled for testing in 2016 and market release in 2020, Novartis announced it was delaying trials in 2016. Later that year, STAT reported that experts within the companies deemed the project overly ambitious, not least because of the poor correlation between glucose levels in blood and in excreted fluids, particularly at low concentrations. (The project has since gone quiet.)

Sweat has also attracted attention for glucose monitoring, with groups in South Korea and in California both announcing projects to detect glucose in the fluid this year.

And the field is certainly not short on ambitious new projects. This June, for example, researchers from MIT and Harvard Medical School proposed tattoos that change color in response to changes in blood glucose concentration. And in April, CNBC reported that Apple now has a “secret group of biomedical engineers” working on a noninvasive glucose monitor of its own.

With millions of dollars being invested in these approaches, public excitement surrounding every new development may be inevitable. But at least some researchers who are experienced in the field have grown weary with the lack of returns.

Now, technology has moved on quite a bit.

John Smith, a long-time consultant on glucose monitoring technologies, has been chronicling progress—or rather, the lack thereof—in the space since the 1990s. Now in its fifth edition, his freely available book The Pursuit of Non-Invasive Glucose: Hunting the Deceitful Turkey concludes that the field is yet to see a real breakthrough. Heinemann feels similarly. “I’m a little bit allergic nowadays if I read something from a company saying, ‘Now we’ve solved the problem; the revolution is here,’” he says. “If you go back in history, there have been 30, 40 companies that have had that ‘revolution’ in their statements [about products] that never made it to the market, and have gone bankrupt within two years.”

A large part of the problem is that details of failures are rarely published, and misconceptions persist, Rice suggests. “Technologies that have been proven to fail have been funded over and over and over again,” he says. “There are sophisticated companies investing millions of dollars in technologies that can’t possibly work, either because technically you can’t make it work, or the organ that they’re trying to test can’t possibly reveal the correct glucose concentration.” While many spectroscopic methods fall into the former category, approaches targeting the eye are prime examples of the latter, he adds. 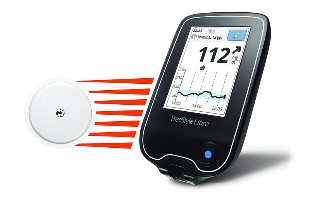 Continuous glucose monitors like the FreeStyle Libre use a disposable sensor with a needle (left) to measure gluocse levels, and a handheld reader (right) to view the data.WIKIMEDIA, WUNDERMANWIKINot everyone agrees with this evaluation. Nemaura’s Chowdhury, for example, argues that “10 years ago, the technologies being applied were not refined enough to be able to give you the level of accuracy that you need. Now, technology has moved on quite a bit.” And, of course, not all approaches can be painted with the same brush. MediWise’s Palikaras suggests that “most large companies that have announced that they’re working in glucose are either doing it for marketing purposes—i.e., not fundamentally trying to help—or wellness purposes, meaning they don’t need the same level of accuracy.”

But all is by no means bleak in the glucose-monitoring sphere. While needle-free techniques have been stuck on the sidelines, the last decade has seen improvements in devices known as continuous glucose monitors (CGMs), which use implantable needles to monitor sugar in interstitial fluid. Leading manufacturer Abbott Laboratories recently released an update to its “Freestyle Libre” CGM aimed at physicians caring for diabetes patients. Both the update and its patient-friendly predecessor use a needle in the interstitial fluid to take measurements every 15 minutes, and can be attached to the arm for two weeks before needing replacement. Academia-industry collaborations, meanwhile, are developing artificial pancreata that combine glucose measurements with automatic administration of insulin—a technology that could substantially improve the lives of type 1 diabetics.

As for a noninvasive approach, Rice suspects the relevant technology to replace finger pricks has not been invented yet, or at least not applied to glucose measurements. But should it come along, he says, there’s no doubt “it would revolutionize the way we take care of patients.”