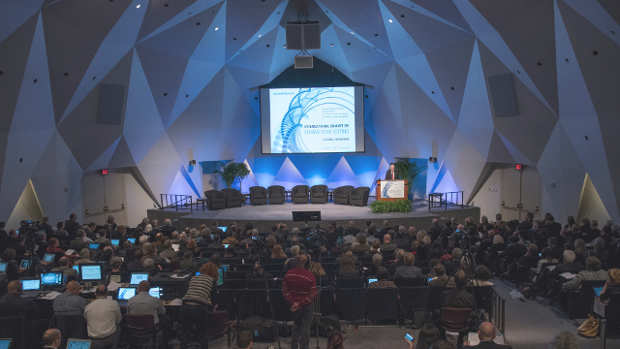 International Summit on Human Gene EditingFLICKR, NATIONAL ACADEMY OF SCIENCESCRISPR made The Scientist’s list of top advances two years ago, and again this year, thanks to seemingly weekly publications about new improvements to and uses of the gene-editing technology. The improvements reported this year include the use of CRISPR to edit the epigenome; a smaller Cas9 protein that fits in a viral vector for efficient in vivo genome engineering; the discovery of four new Cas proteins that could expand the gene-editing toolbox; and the engineering of an altered Cas9 that binds less tightly to mismatched DNA. But the biggest news this year was on the application side of the technology—namely, its use to edit the human germline.

In April, researchers at Sun Yat-sen University in Guangzhou, China, reported in Protein & Cell that they had successfully used the CRISPR/Cas9 system to cleave the endogenous β-globin...

The US National Institutes of Health (NIH) was also wary of the use of CRISPR to edit the human germline; before the month was up, the agency had announced that it would not fund such research. “The concept of altering the human germline in embryos for clinical purposes has been debated over many years from many different perspectives, and has been viewed almost universally as a line that should not be crossed,” NIH Director Francis Collins wrote in a statement. “Advances in technology have given us an elegant new way of carrying out genome editing, but the strong arguments against engaging in this activity remain.”

But not everyone is against this application of CRISPR, which holds the potential to treat diverse genetic diseases. In September, the U.S./U.K.-based Hinxton Group pledged its support of gene editing in human embryos for certain uses in research and medicine. 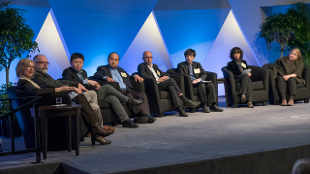 A panel including widely cited CRISPR discoverers Jennifer Doudna (far left), Emmanuelle Charpentier (second from right), and Feng Zhang (third from left) discusses the development of the technology at the International Summit on Human Gene Editing.FLICKR, NATIONAL ACADEMY OF SCIENCESThe debate culminated in an international summit held at the National Academy of Sciences building in Washington, DC, earlier this month. More than 400 researchers, including the widely cited discoverers of CRISPR technology, gathered from 20 countries on six continents to discuss when and how to apply the powerful tools. While the meeting attendees were largely supportive and excited about precision gene editing, even as it could be applied to the human germline, there was an air of caution among the speakers.

“Aldous Huxley, in his book Brave New World, imagined a society built on selection of people to fill particular roles in society with environmental manipulation to control the social mobility and behavior of the population,” Caltech’s David Baltimore, who chaired the summit’s planning committee, said in his opening remarks. “The warning implicit in his book is one that we should take to heart as we face the prospect of this new and powerful means to control the nature of the human population.”

On the last day of the meeting, members of the Organizing Committee released their official report, supporting the use of CRISPR for somatic cell–based gene therapies but not for germline editing “unless and until (i) the relevant safety and efficacy issues have been resolved, based on appropriate understanding and balancing of risks, potential benefits, and alternatives, and (ii) there is broad societal consensus about the appropriateness of the proposed application.”

Meanwhile, as a patent battle rages on about who owns the technology, researchers are already working toward bringing CRISPR to the clinic. Just last week, for example, researchers at the Hospital for Sick Children in Toronto used a variation of the technique to boost levels of the utrophin protein in cells taken from a patient with Duchenne muscular dystrophy (DMD).

“We could be on the cusp of a new era in human history,” Baltimore said at the international summit. “Although gene editing is in its infancy today, it is likely that the pressure to use gene editing will increase in time, and the actions we take now will guide us into the future.”