Each year, we at The Scientist devote a handful of our monthly issues to life-science topics that are so interesting or fast-moving that a feature alone would not suffice. This year, these included aging, HIV, hearing, and obesity. Read on for recaps of TS’s special issues, 2015. 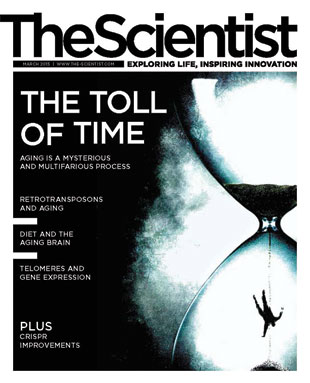 Aging is complex. It’s a whole-organism process that happens over a lifetime. It happens at the level of the genome—telomeres, DNA repair processes, and epigenetic modifications have all been linked to aging—as well as the level of proteins. Protein misfolding, mitochondrial dysfunction, and stem cell activity are also prime aging suspects. We at The Scientist tackled the diverse molecular dynamics underlying aging in the lead feature story in our special issue on aging. Two other features explored how diet affects aging and the role of retrotransposon-induced DNA damage. In the Literature section, we tackled collagen remodeling in...

And there’s no way researchers will understand it all unless they are more open with their data, argues University College London and EMBL European Bioinformatics Institute postdoc Matthias Ziehm in an opinion piece on the need to share annotated longevity data. One question that the field is anxious to answer: How do we stay healthy as we live longer? 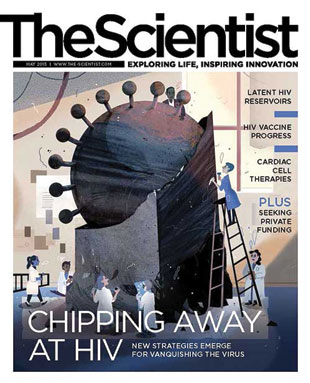 While today’s antiretroviral therapies keep HIV under control, there’s a long way to go before the virus can be considered defeated. One nagging problem is medicine’s inability to consistently and completely eliminate HIV from the body. The virus lurks in an inactive form that escapes detection by the immune system. Sussing out these hidden reservoirs will be critical to treat patients and eradicate HIV. Understanding where the virus replicates will also be important. Another major line of HIV research focuses on vaccine development. If we can prevent transmission, one day we won’t have to fight the infection. 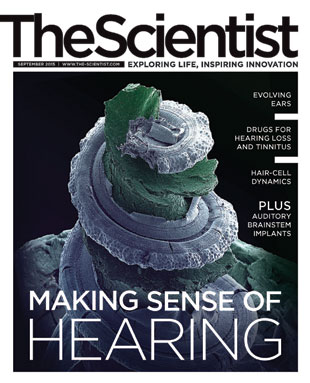 In the past four years we’ve dedicated one of our fall issues to the senses of taste, touch, smell, and sight. This year, we complete the survey of the five basic senses with a focus on hearing. The transduction of sound through the human outer, middle, and inner ears is a complicated and fascinating process. Current research on hearing ranges from how we got such abilities—a story of remarkable convergent evolution—to how to prevent and treat hearing loss and tinnitus.

The key players in animal hearing are the inner ear hair cells, which in mammals are arranged in a spiral organ of Corti. Exposure to certain medications, such as the chemotherapy drug cisplatin, can kill these cells, causing hearing loss, though sometimes the cells can regenerate.

Understanding these processes should support the development of new therapies for hearing loss, including improved ear and brain stem implants. Challenges remain, however—notably, the incredibly intricate system that is failing when someone loses his hearing, writes hearing researcher Bernd Fritzsch of the University of Iowa’s Center on Aging in an opinion article: “Piecing together such a complex and delicate organ is not as simple as growing new cells in a petri dish.” 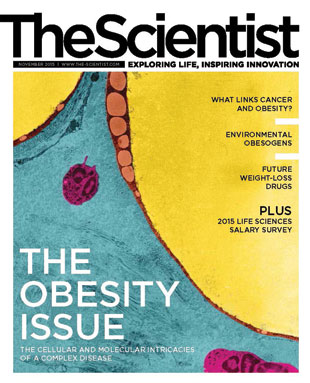 In addition to the elevated blood pressure and high levels of blood sugar and cholesterol that many overweight and obese people suffer, these individuals are also at increased risk for more deadly diseases such as cancer. “This year, obesity overtook smoking as the top preventable cause of cancer death in the U.S., with some 20 percent of the 600,000 cancer deaths per year attributed to obesity,” write the authors of our feature story on the link between obesity and cancer.

Fundamental questions remain. One is, what causes obesity? Some have pointed the finger at low doses of environmental chemicals, which can make animals gain weight. Obesity has also been linked to the gut microbiome. And, of course, we can’t overlook the importance of diet, though two opinions in this issue argue that obesity is not simply a problem of willpower, as it is often portrayed—it is a chronic disease.

Then, of course, there are the consequences of obesity. Fat can affect neural activity in the brain, diminish muscle performance, and trigger a fatty acid synthesis pathway that spurs T cell differentiation and inflammation. Sometimes, a little extra weight can have health benefits.

Finally, researchers are trying to figure out how to treat obesity. Bariatric surgery has come a long way since it was first implemented in the middle of the 20th century, sometimes with fatal outcomes. And pharmaceutical treatments for obesity are finally coming into their own.