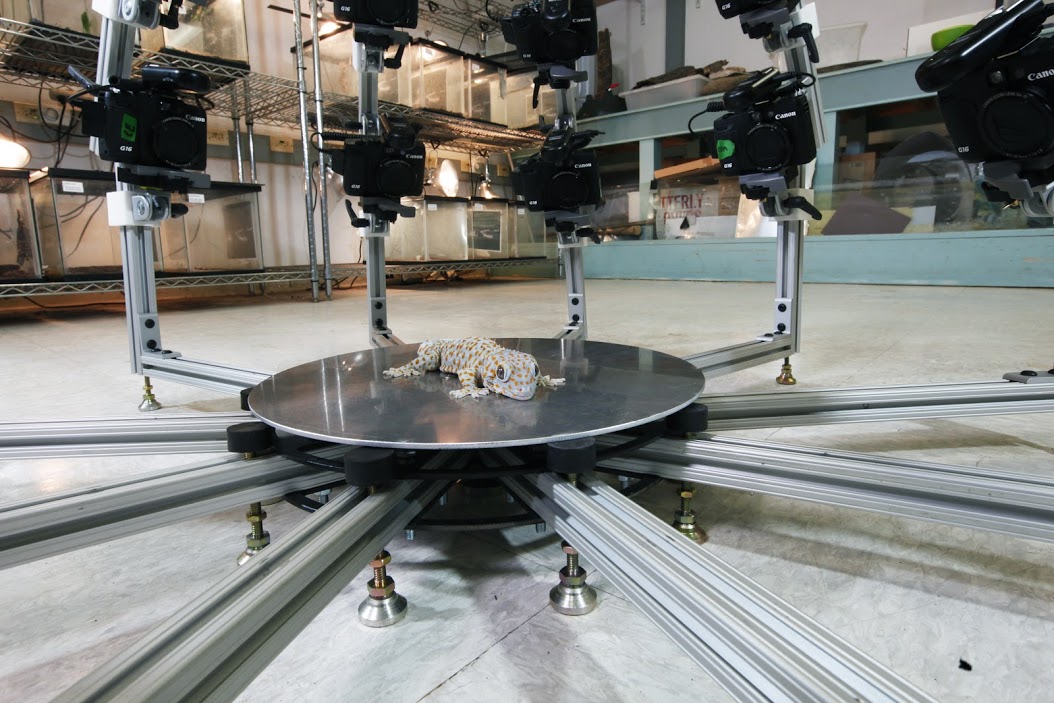 A gecko in the BeastcamUNIVERSITY OF MASSACHUSETS AT AMHERSTIt is too late for the the Bramble Cay melomys and the Rabbs’ fringe-limbed tree frog—both declared extinct in 2016. It’s probably too late for the Northern White Rhino and the San Cristobal Vermillion Flycatcher, as well. As conservation biologists scramble to head off extinctions, one team of researchers, led by biologist Duncan Irschick at the University of Massachusetts Amherst, is taking a less conventional approach: capturing at-risk species in immaculate 3-D models.

“The basic goals are education and conservation,” Irschick said. “One really big goal is just digital heritage—a lot of animal species are going extinct. Obviously, a 3-D model isn’t going to save them, but it highlights their beauty, gets people excited, and gives conservation groups new leverage to compel people.”

The centerpiece of the initiative, known as the Digital Life Project, is the Beastcam, an arachnoid array...

Slideshow: Capturing Endangered Species In All Their 3-D Grandeur

The current rig can capture virtually any animal between half an inch and six feet in length. But for larger animals, or those living in challenging environments, the array can be adjusted. “We’ve built different platforms for different systems,” Irschick said. “In the case of one shark, we used a handheld system. We brought the shark on the deck, modelled it really quickly, and let it go.” There are plans to capture larger creatures still. “We’re developing a system for bigger animals, tigers, rhinos, and that will take a few more months. We have not yet developed the multicam rig for underwater photography, but we could easily do it.”

In addition to sharks, Irschick and colleagues have already created 3-D models of scorpions, toads, and lizards. In the coming months, they intend to capture a battery of endangered frogs and sea turtles; after that, they hope to bring the portable version of the Beastcam to zoos around the world. “It’s also very useful to scientists,” Irschick said. “With 3-D models of sea turtles, you can do computer modeling work with them, study migration patterns. You can create 3-D models of animals in the field and then you have their posture, color, textures.”

Jonathan Losos, an evolutionary biologist at Harvard University who is not involved in the Digital Life Project, recently attended a lecture on the Beastcam, delivered by Irshick. “It sounds like it’s still a project in its early stages, still finding its use,” Losos said. “But there are all kinds of applications for studying and archiving biological diversity. The quality of the images they produce is really extraordinary.”

Although he has not yet used the technology to collect data, Losos said he is planning a trip to a nearly inaccessible island to study a rare lizard, and can imagine that the Beastcam would come in handy. “We’d normally collect specimens, but since this species is only found there, it’s protected by the local government,” he explained. “The allure of Duncan’s method is that we can go out and basically take pictures, document the variation that exists within a population, and it’s almost as good as having the specimens themselves.”

For all its promise, however, the Beastcam can only capture the external features of the animals. While Irshick’s method saves time in capturing what an animal looks like, it does not solve the arguably more-pressing problem of finding a quick and efficient way to document the internal features of animals, a feat usually managed by time-consuming X-rays or CT scans. “The obvious limitation is that you’re only getting the external appearance of the organism,” Losos said. “This will only get you the external dimensions of the organisms, but that’s what this is for. It will not replace other methods, but it will complement them.”

Beyond strict laboratory applications, Losos suspects that there will be broad, multidisciplinary interest in the Beastcam. “As well as scientific value, there’s certainly great conservation and archiving value,” he said. “But also just the value in creating these images, which I think the public will be very excited about.”

Irshick agreed. The Digital Life project could also play a role in education, he proposed. “The thing I like most about the project is the power to help young people feel the beauty of a nature, the joy of discovery, to nourish people, and keep them awake at night,” Irschick told The Scientist. “If we bring some of that sense of wonder to people, that makes us very happy.”