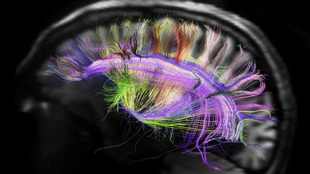 We often conjure up images of the human brain as a jostled bird’s nest, a mash of spaghetti, or a jungle of twisting wires. But the brain is no disorganized tangle of neurons, according to new research. Instead, it is structured into a three-dimensional grid of ribbon-like brain fibers that cross each other in an orderly fashion.

Researchers at Massachusetts General Hospital in Boston visualized the simple geometric structure of the human brain using a specialized MRI scanner. Their results, described today (March 29) in Science, provide a coordinate system for mapping neuronal pathways—like longitude and latitude for the brain. The architecture could lead to a new understanding of brain development and evolution.

“Everywhere they looked, they found a geometric architectural principle that transcends any particular part of the brain,” said Karl...

The organization of the primate brain has not been an easy nut to crack. Since Santiago Ramón y Cajal began dissecting animal brains and drawing their fine structure in the 1800s, scientists have sought ways to visualize the architecture of the brain. Beginning in the early 1990s, scientists used tracer dye methods to investigate individual neuronal pathways: injecting dye into live brains and watching it disperse along individual axons, leaving a colorful trail. But these investigations mapped only small bits of brains in non-human animals. And there was no good technique to map connections in the live human brain—until recently.

In the late 1990s, Van Wedeen of the Martinos Center for Biomedical Imaging at MGH developed a variation on magnetic resonance imaging called diffusion MRI, a method that allowed him to map three-dimensional fibers—such as bundles of axons—across an entire living brain. With each brain that he scanned—cat, rat, monkey, and human, to start—Wedeen immediately noted organization, something very different from the “spaghetti paradigm” of how the brain had previously been described.

“There was an unmistakable sense of geometric order,” said Wedeen. He saw an architecture that was too beautiful and too well conserved among the species to be accidental, he recalled. “I spent ten years knocking myself out, thinking, ‘It’s organized, but how?’” In 2010, Wedeen analyzed patterns of brain fibers crossing and touching each other. “That’s where things broke open,” he said. A mathematical pattern emerged: the brain was built in a pervasive geometric way—parallel and perpendicular fibers cross each other in an orderly fashion, forming a two-dimensional weave pattern, like a fabric, that winds in three-dimensional space like a ribbon. This 3D grid covered the entire cerebrum, and individual pathways were mapped in three directions: front to back, top to bottom, and left to right. The grid was highly similar across primate species, from the complex brains of humans and rhesus monkeys to simpler owl monkey and marmoset brains.

“The brain has a dead simple plan, a natural coordinate system,” said Wedeen, which has implications in many areas of neuroscience. For one thing, the simple structure helps explain how the complex brain evolved. The old perception of the brain as a tangled mass of neurons didn’t make sense in terms of natural selection: how can thousands of brain fibers connect and disconnect at random to form a more complex structure? A simple geometric structure, however, accommodates gradual changes guided by natural selection.

The new understanding also informs our thinking about brain development, said Friston. The grid-like arrangement implies that chemical gradients, arising during embryogenesis, help shape the brain in three dimensions over time. “We’re not just starting from some simple arrangement and losing that to randomness,” he said. “You actually preserve the elemental structure [of the brain] from birth.”

Wedeen hopes to work with others to validate the findings using other investigative techniques. “MRI is still a macroscopic inference of a microscopic phenomenon,” he said. “What might we be able to learn when we bring together MRI, electron microscopy, numerical modeling, and more?”