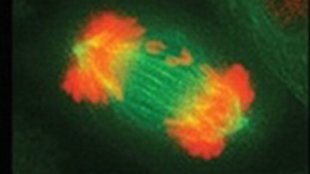 Mis-segregating chromosomesSTEFANO SANTAGUIDA, ANGELIKA AMON, MITAneuploidy—the incorrect number of chromosomes in a cell—is extremely common in early embryos and is the primary reason for pregnancy loss. A report published today (April 9) in Science reveals that one cause of this aneuploidy—aberrant cell divisions in the embryo—is linked to a genetic mutation carried by the mother. Astonishingly, this mutation turns out to be very common and appears to have been under positive selection during human evolution.

“There’s this genetic variant that they’ve been able to identify with very nice evidence for positive selection, but that has a fitness consequence, a fecundity consequence . . . that decreases the viability of an embryo,” said evolutionary geneticist Ed Green of the University of California, Santa Cruz, who was not involved in the work. “It flies in the face of what we think of in terms of positive Darwinian selection and demands...

Approximately 75 percent of human embryos exhibit some form of aneuploidy and most of those will result in a failed pregnancy. Indeed, fewer than 30 percent of all conceptions are thought to result in an actual pregnancy. The likelihood of aneuploidy in a woman’s eggs—so called meiotic-origin aneuploidy—increases with age, but “even when the egg doesn’t have any issues, errors can be introduced in the first few cell divisions [of the embryo] and are extremely common,” said Rajiv McCoy, lead author of the new study and researcher in the laboratory of Dmitri Petrov at Stanford University. In fact, such mitotic-origin aneuploidy is “even more common than meiotic-origin aneuploidy,” McCoy said.

The striking abundance of mitotic-origin aneuploidy has been discovered thanks to the advent of embryo screening during in vitro fertilization (IVF), explained McCoy. But the rates of mitotic aneuploidy vary considerably between couples undergoing IVF, he said. To understand what might be driving this variation, the team examined whether the existence of aneuploidy in three-day-old IVF-derived embryos was associated with the presence of certain nucleotide variants in the parents’ genomes.

The first few divisions of an embryo’s life require the use of protein machinery inherited with the egg. The team was thus excited to find that in the vicinity of rs2305957 was the gene encoding the enzyme PLK4. This kinase is critical for organizing the poles of the mitotic spindle—the framework that separates the chromosomes at each cell division.

“Based on the function of PLK4, it absolutely could cause what it is that [the authors] are observing,” said Andrew Holland of Johns Hopkins University who was not involved in the research. However, he warned, besides being in the linked region, “we really don’t have any evidence that there are alterations in PLK4 that are causing this phenotype.”

Whether PLK4 is in fact the gene influencing increased aneuploidy in embryos, the rs2305957 variant turns out to be very common. The team found it was present in diverse human populations at frequencies up to 45 percent. The variant is absent from Neanderthal genomes, however, which—together with its high frequency in modern populations—suggests it has been under positive selective pressure during human evolution, the researchers noted. Indeed, the region encompassing rs2305957 was previously identified, through sequence comparisons with Neanderthal genomes, to display features of positive selection.

Why should an apparently deleterious variant have been maintained in the population at all? It’s possible that the mutation is linked to another beneficial genetic trait and has simply evolutionarily hitchhiked to high frequency. It’s also possible however that the rs2305957 variant itself is beneficial. Petrov is putting his money on the latter.

The slightly reduced odds of successful pregnancy for those women carrying the rs2305957 variant, he suggested, could have helped establish something called paternity confusion—a hypothesis that suggests it was beneficial in early human communities for males to be uncertain whether children were their own. The theory is that this ensured all children were equally cared for, which benefited the group as a whole.

“There are many human characteristics and behaviors that can be explained in terms of paternity confusion,” said Green, such as the fact that unlike other primates and apes, human females do not physically advertise when they are ovulating. But “that the need to confuse paternity is so strong that . . . we have evolved the ability to reduce embryonic viability? That is crazy,” he said, “It would say a lot about the importance of paternity confusion, if in fact it is what’s driving this.”

Ultimately, because the findings seem “so paradoxical,” said Green, “I fear that any theory one can come up with is going to feel wrong in some way.”