ABOVE: X-ray of a catheter ablation procedure, not from this study
© ISTOCK.COM, ZILLI

Injuring neurons, especially those involved in regulating a person’s heartbeat, sounds like a bad idea, but such “collateral” damage to nerve cells in the heart during catheter ablation—a common, but not fully understood, procedure used to treat atrial fibrillation—may actually lead to better outcomes, according to a study of mice and humans published on Wednesday (May 22) in Science Translational Medicine. Using a biomarker of injury to neurons and glia called S100B, the researchers find that patients with a greater increase in levels of the protein had fewer symptoms after the treatment than patients who experienced only a small rise in S100B.

“We were expecting that more neural damage would be bad for the patient,” Katharina Scherschel, a scientist at University Heart and Vascular Center UKE Hamburg and the lead author of the...

But what she found was the opposite.

Atrial fibrillation, an abnormal heart rhythm that can lead to stroke or heart failure, affects millions of patients in the United States, with about 130,000 dying each year. Often, patients are treated with medication and lifestyle changes, but over the last 20 years, doctors have found that catheter ablation can help patients for whom other interventions aren’t enough.

For the procedure, a doctor uses a catheter to deliver extreme heat, cold, or other destructive energy to the part of a patient’s heart where the irregular beats are originating. This creates scar tissue, separating that area from the rest of the heart and preventing the irregular electrical signals from traveling through the entire muscle.

Scherschel’s colleague Christian Meyer, a cardiologist and the senior author on the paper, says that catheter ablation is becoming the “most valuable therapy we have” for atrial fibrillation, but it’s still only effective 70–80 percent of the time. “It’s definitely clear we need to add approaches,” he says. 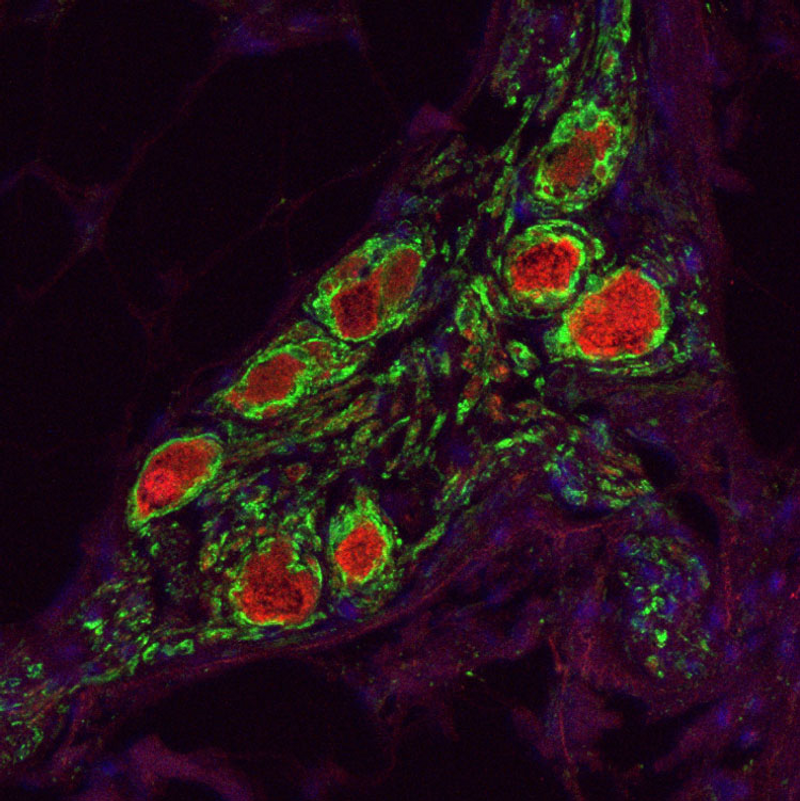 The procedure damages cells other than the myocytes it targets, including the surrounding neurons and glia that make up the intrinsic cardiac autonomic nervous system (ICNS), responsible for regulating heart function. But it hasn’t been clear if this damage is part of what makes ablation successful, or if it causes problems.

In hopes of understanding how catheter ablation affects the ICNS, Scherschel and her team first searched for a way to measure the amount of neuronal damage the procedure caused in each patient.

The researchers knew that almost immediately after they’re damaged, neurons and glial cells increase the production of a protein called S100B. So the team took blood from 112 patients before and after they underwent catheter ablation and sure enough, they found a significant increase in the concentration of the protein after the procedure. Patients who didn’t have the procedure also showed an increase in the protein, but not as high.

Next, Meyer says, the team “went back to the bench” to find more evidence that the procedure led to an increase in S100B and then to figure out what this protein might be doing. First, they stained tissue samples from the patients and demonstrated that the S100B was coming from glial cells that surrounded neurons in the heart. They confirmed the source by conducting a similar procedure in mouse hearts.

Then, they wondered, is the protein affecting the muscle cells, the neurons, or both?

They tested the protein’s effects on samples of mouse and human cells. While the muscle cells in the samples functioned normally in the presence of S100B, the neurons fired less—and grew more.

Then came the real surprise. When the researchers followed up with the 112 patients six months later, they found that the patients who had had greater increases in S100B after the ablation had more successful outcomes—they were less likely than their counterparts who had had minimal increases in the protein to be suffering recurrent atrial fibrillation.

“The S100B as a marker of response to the ablation could prove to be a nice predictor of patients most likely to benefit from the ablation,” Christopher Ellis, a cardiac electrophysiologist at Vanderbilt Heart and Vascular Institute who was not involved in the study, tells The Scientist in an email, “and also provides a new target for therapy aimed at increased neuronal sprouting as a beneficial effect post ablation.”

The work “adds to a potential other secondary mechanism” through which ablation can help patients with atrial fibrillation, says Marc Moon, a surgeon at Washington University School of Medicine in St. Louis who was not involved in the study. But he’s skeptical. “It’s a finding of a correlation but not necessarily one that could guide treatment.” More tissue damage means less atrial tissue able to generate fibrillation and more S100B, he says, “but the downside is then you’d say, ‘well, why don’t we just damage all of the atrial tissue?’ . . . So you have to balance the damage with the outcomes you’re looking for.”

In addition to using the biomarker to clarify treatment options, Meyer says, a crucial take-home message is that scientists should look more closely at glial cells. “That’s a new thing to consider more appropriately because they have physiological function,” he says. “The growing and very relatively new topic is the glia and its interaction with neurons and maybe also myocytes as well.”