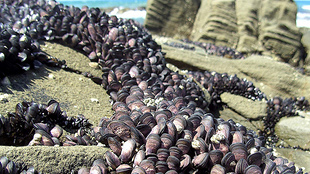 During fertilization, some pairings of mussel sperm and eggs work better than others—but how do the best couples find one another in the open ocean? New research, published online Tuesday (March 20) in Proceedings of the Royal Society B: Biological Sciences, raises that possibility that chemicals released by eggs may help sperm find not just any eggs, but the ones that will have the most successful fertilizations.

“You have some crosses that work well or don’t work as well, and they seem to have data here that there is a contribution of chemoattractants,” said Michael McCarthy, a marine biologist at the University of North Carolina Wilmingham who was not involved in the research.

In the open ocean, mussels and other invertebrates release their eggs and sperm into the waves, often doing so on the same night to raise the chances that they’ll bump into one...

This is just as true in other animals, but because mammals, birds, or insects engage in mating behaviors or rituals, they can actively choose a more compatible mate. “If you’re an invertebrate fixed to a pier piling or a rock, that job is a little bit harder,” said Jon Evans, who studies marine sexual selection at the University of Western Australia.

Sperm navigate through the ocean towards unfertilized eggs by following chemical cues released by the eggs, but researchers had assumed that the chemical gradient simply points the sperm in the right direction. Evans had the idea that maybe they provide more information that just location. “Eggs have very specific chemical cues per species, so why wouldn’t they say a little bit more?” he asked. “Wouldn’t it be cool if this was a mechanism for sperm to find a way to compatible eggs?”

To study the question, Evans and his colleagues designed mating crossings for the Mediterranean blue mussel (Mytilus galloprovincialis). Sperm from each of 15 male mussels were used to fertilize eggs from two different female mussels in a petri dish, and the researchers measured the fertilization rates of each pairing. This provided individual-specific information about which pairings were likely to be the most compatible.

The next step was to test whether the sperm are somehow attracted to the eggs that they fertilized more successfully. The researchers built a choice chamber: at each end of a tube, they placed eggs from two different females from the previous experiment. Sperm released in the middle could then make a choice based on the “chemoattractant cues that we allowed to leach from each side of the chamber,” said Evans.

Sure enough, sperm tended to swim towards the eggs that resulted in more fertilizations. “The sperm were smelling their way to more compatible eggs,” said Evans.

The researchers haven’t identified any specific molecules that convey this message, or even what kind of information they carry. Evans suspects it could be some kind of genetic information to promote genetic diversity or discourage inbreeding.

Furthermore, finding an egg is just the first step for sperm, which then have to tunnel through protective layers and fuse with the egg to initiate fertilization—and some eggs are easier to fertilize than others, potentially independent of chemoattractant-signaled compatibility with certain sperm. So while McCarthy does think this “provocative” paper shows that chemoattractants play a role, their connection with these other steps needs to be parsed out.

If confirmed, the work could help explain how speciation occurs in marine species that disperse their eggs and sperm broadly, marine biologist Vic Vacquier of the Scripps Institution of Oceanography, who was not involved in the research, wrote in an email to The Scientist. “If there were natural separations of one species into two or more populations… the sperm from males of one of the populations might become unresponsive to the chemo-attractive signals secreted by the eggs of the other population,” he said. “Such a scenario in time could lead to reproductive isolation and formation of two new species.”