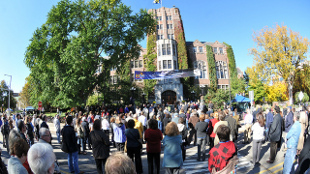 University of Michigan graduate research assistants will soon learn whether they have the right to unionize. Yesterday (December 13) Michigan Employment Relations Commission (MERC) requested a fact-finding hearing to determine whether graduate research assistants at the university are employees or students, who unlike employees, lack the right to unionize. While some life scientists worry that unionization may lead to mediocrity in research, others say collective bargaining rights are essential to ensure fair wages and protection from mistreatment.

“The main issue is that [graduate research assistants] are considered employees by the university,” said Jamie Van Etten, University of Michigan graduate student in biological chemistry. “As such, we should have the right to negotiate the terms of our employment.”

Graduate student researchers have been barred from forming a union since 1981, when the MERC ruled that while they do perform research, they are still students, not employees....

But in April, over half of the graduate student research assistants on campus signed a petition requesting the right to unionize, and the following month, university regents voted along party lines (6-2) to allow unionization, with Democrats in favor and Republicans opposed.

At a meeting with MERC this Tuesday (December 13), the Graduate Employment Organization (GEO) argued that because the nature of research at the University of Michigan has fundamentally changed in the past 30 years, graduate students should now be considered employees. The University brings in significant revenue through research grants, and its mission statement now cites research as a core activity, said Caren Weinhouse, an environmental epigenetics graduate student and the GEO’s communications chair.  In addition, many graduate research assistants, like her, get their funding “on a grant and are required to do things for that grant even if it’s not related to their dissertation,” she added.

In response to the GEO’s claim, the MERC requested a fact-finding hearing to evaluate whether graduate students are in fact employees, not just students. Those opposed to unionization, including the Republican state attorney general Bill Schuelte, can submit evidence against student employee status during that hearing, but because they are not the ones who would be affected by the decision, they can’t file a lawsuit to block unionization.

Indeed, many administrators and faculty have pushed back against the possibility of a graduate researcher union, worrying that the change could harm research at the university and invite mediocrity. “The vast majority of peer schools that we compare ourselves with at Michigan don’t [unionize]—MIT doesn’t, Stanford doesn’t, neither does Berkeley,” said Thomas Zurbuchen, an aerospace engineering professor at the University. “Today’s university is a battle for quality talent,” and a unionized Michigan may struggle to stay competitive with these top-flight schools, he said.

Plus, Zurbuchen added, not all graduate students are pro-unionization. Some fear that they won’t have the freedom to come into the lab and works nights and weekends if unionization occurs, he said.

But that worry is misplaced, Weinhouse said. A union would have to vote to decide whether it wanted to impose limited work hours, and even if it did, no student would be barred from putting extra hours in on research, she said. The limitation would be in place for those researchers who feel they are being overworked by their advisors, she explained.

Having a union is about ensuring that every student gets fair protection, especially if they are in tough lab situations, agreed Van Etten. “I know students who are really happy in their lab. I am one of them,” she said. “Our advisor cares about our success as students and as scientists, but I know that’s not the case across the board.”

Zurbuchen said he’s also heard graduate student researchers voice concerns about losing the generous benefits they receive in cushy engineering and life science appointments. Van Etten has also heard some concern about pay cuts, the possibility of union dues, and potential interference with the mentoring relationship students share with their advisors. “Those are valid arguments, but I think that there are some misunderstandings, too, about how a union would function,” she said.

Unionization should protect students against lower wages if the university faced cuts, for example, Weinhouse said. “A union is there to protect people’s rights as an employee.”