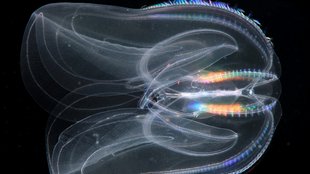 The comb jelly Mnemiopsis leidyiBRUNO VELLUTINISponges have been generally considered our most ancient animal relatives. But that title may actually belong to members of the anatomically more complex phylum Ctenophora, or comb jellies, according to a report published today (December 12) in Science. This family tree reshuffle has come about thanks to the whole-genome sequencing of the comb jelly Mnemiopsis leidyi.

“It’s very exciting because there’s been a lot of debate about early animal evolution,” said John Finnerty, a professor of biology at Boston University, who was not involved in the study. Part of the reason for the debate was the lack of a whole genome sequence from a comb jelly. “The major early animal lineages had all been represented by at least one species with a sequenced genome with the exception of the Ctenophores,” Finnerty said, “so this really was a key piece of...

As their name implies, comb jellies are gelatinous animals with combs—bands of cilia running along their bodies that enable them to swim about in the sea. Based on their morphology, comb jellies had traditionally been considered close relatives of the Cnidaria—the phylum that contains jellyfish and sea anemones. Such morphological analyses had also classed the sponges, or Porifera, which are non-motile and lack muscles and nerves, as the most primitive members of the animal family.

But a recent comparison of multiple genes from members of the five major animal phlya—Ctenophora, Cnidaria, Porifera, Placozoa (tiny flat animals that live on the seabed), and Bilateria (which includes humans, insects, flatworms, and more)—indicated that comb jellies might oust sponges for the rank of most primitive.

“If the split between Ctenophores and all other animals was the earliest split in animal evolution, it suggests some unintuitive facts about evolution,” said Finnerty. “For example, that sponges, which are very simple animals that lack a nervous system and lack muscle cells, actually came from an ancestor that had those features.” Ctenophores, he explained, “tend to be really active animals—they are swimmers, they have smooth muscle, they have a nervous system, they prey on zooplankton. . . . They would seem to be representative of a much more complex condition, anatomically and behaviorally.”

Consequently, the suggestion that the Ctenophora might be the earliest branch of the animal family tree “was and has remained controversial,” said Andy Baxevanis, who is head of the Computational Genomics Unit at the National Human Genome Research Institute and led the new study. “It became obvious to us that having a whole genome sequence for the Ctenophores would go along way to resolving the issue.”

The team extracted DNA from M. leidyi embryos, sequenced the entire genome, and compared it with whole genome sequences of 12 other member species of other animal phyla. They applied two methods of comparative statistical analyses—one called maximum likelihood, the other called Bayesian. From the maximum likelihood analysis, “Ctenophores always came out at the base,” said Baxevanis.  Using the Bayesian approach, however, “what you end up seeing is a new clade that is composed of both the Ctenophores and the sponges [at the base], so you can’t determine which came first.”

So the team performed a gene content analysis, whereby they determined the presence or absence of a set of orthologous genes across species. Taking this approach, the team found “unequivocally that the tree supports having Ctenophores at the base.” With two out of the three approaches giving the same result, Baxevanis said, “we feel pretty confident that Ctenophores are the sister group to the rest of the extant animals we studied.”

The placing of Ctenophores at the base of the animal family tree not only suggests, counterintuitively, that sponges and placozoans have lost their ancestral nervous systems, it also suggests that muscle development may have evolved twice within the animal kingdom. In the only other animal phyla besides Ctenophores to contain muscle cells, Bilateria, muscle develops from mesoderm tissue during embryogenesis. Surprisingly, however, the genome sequence of M. leidyi lacked the genes for mesoderm development almost entirely.

“Like any good genome that has been sequenced, the results of this study generate more questions than answers,” said Antonis Rokas, a professor of biological sciences at Vanderbilt University in Nashville, Tennessee. “If the placement of Ctenophores is correct,” he added, “it really changes quite a bit of the text book interpretation that we have about the evolution of morphological complexity.”