It’s well established that exercise is good for the mammalian brain. As early as 1999, researchers discovered considerably more newborn neurons in the hippocampi of mice that had access to a running wheel than in animals that didn’t. But 20 years later, scientists are still trying to understand why.

A team of Australian and German researchers has uncovered one mechanism that explains how exercise boosts neurogenesis in mice: the activity causes platelets circulating in the blood to release factors that boost the growth of neural precursor cells in the hippocampus, the researchers report today (March 21) in Stem Cell Reports.

“We all know about the positive effect of exercise on the brain and other organ systems, but what the actual mechanism is to promote new neuron production is still a bit of a mystery,” remarks Vince Tropepe, who studies neurogenesis at the University of Toronto and who was not involved in the study. “This paper is quite interesting in that they’ve identified a player—these platelets and platelet-derived factors that are circulating in the blood after exercise—that might be a mediator of this effect.”

The researchers came to this conclusion through a series of experiments comparing mice that had access to a running wheel for four days with control mice that didn’t. Lab mice voluntarily run up to 10 kilometers per night, “equivalent to us running more than a marathon a day,” explains coauthor Tara Walker, a senior research associate at the Queensland Brain Institute.

She and her colleagues used mass spectrometry to screen for proteins in blood plasma extracted from the running mice, and identified nearly 40 proteins with significantly higher levels than in plasma isolated from control mice. Using bioinformatic analysis, they characterized three major biological pathways these proteins are involved in, which were all related to platelet function. Additional examination of the animals’ blood showed that the proportion of activated platelets—which express particular receptors on their cell surface—surged in the blood of running mice.

To see if platelets and the proteins they release can boost neurogenesis, the team extracted stem cells from the mouse hippocampal dentate gyrus—one of the two main sites of neurogenesis in the adult brain. They grew them in a specialized neurosphere culture, which allowed Walker’s team to count the number of neural precursor cells that form. After adding platelet-rich media isolated from the running animals, the researchers observed a nearly 150 percent increase in the number of neurospheres, whereas they observed a 136 percent increase when they were cultured with platelets from control mice.

The team conducted the reverse experiment, in vivo, by injecting an anti-platelet serum into mice that had access to a running wheel, in order to reduce their platelet count. These animals showed no increase in neural precursor cells in their hippocampi.

Walker and her colleagues went on to conduct several additional experiments with a specific protein secreted by platelets, platelet factor 4, one of the most highly upregulated proteins in the plasma of running mice. After infusing the protein into the hippocampi of live mice for one week, they observed a modest increase in immature newborn neurons, while mice given a saline infusion experienced no difference.

Walker says she thinks platelet factor 4 is likely one of many blood-borne factors that cross the blood-brain barrier and influence neurogenesis. “We propose that exercise is causing a whole bunch of things, and one of them is the release of factors by activated platelets,” she says. This may include growth factors known to be released by platelets, for instance, some of which have been previously shown to influence the proliferation of neural precursor cells in the hippocampus.

See “How Exercise Reprograms the Brain”

For her, the results demonstrate how versatile platelets are. “They were originally just thought to be involved in clot formation when you have wounds, but it seems now they have many alternative functions beyond this,” she explains. Other research has implicated platelets in immunity and inflammation. Walker next plans on investigating whether blood platelets’ positive effect on neurogenesis translates to benefits on cognition in a mouse model of aging.

For Sama Sleiman, an assistant professor at Lebanese American University who also wasn’t involved in the new research, the study underscores the idea that blood-carrying factors can promote neurogenesis in the brain. Her most recent research suggests that lactate, released by muscles during exercise, induces the expression of a gene in the mouse hippocampus that ultimately improves memory and spatial learning.

“However, I think at the molecular level we still need more work,” she says, noting that the effects of platelet factor 4 on neurogenesis were relatively small. She says she’d like to see more experiments on the other proteins released by platelets after exercise and their influence on neurogenesis in order to fully understand how the mechanism works.

“The reality is that these factors are never working alone,” agrees Tropepe, “because the benefit of having more neurons after exercise is probably something that has been cultivated over many, many years of evolution and there’s probably a lot of parallel pathways and interacting pathways that need to be regulated.”

One outstanding question is whether platelets play a similar role in humans. It’s unclear if new neurons grow in the adult human brain at all, with recent studies conflicting on whether neurogenesis in the human hippocampus is detectable in adults. But perhaps platelets and the factors they release still play a role in other contexts, such as learning and memory, or conditions such as depression or Alzheimer’s disease, Sleiman suggests. “It opens the door to looking more carefully at different brain-related processes.” 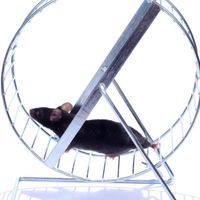