At the turn of the 21st century, University of Bristol epidemiologist George Davey Smith was growing dissatisfied with his field. “I’ve been working in epidemiology for a very long time,” he says. “And I was disillusioned with the conventional approaches to try to establish cause and effect in observational epidemiology.”

Confounding factors plague observational studies, which examine populations of people to identify correlations between environmental conditions or lifestyle factors and disease and therefore cannot draw conclusions about a disease’s cause. Highlighting the approach’s limitations is the fact that randomized controlled trials, widely considered the gold standard for medical evidence, have failed to confirm many observational results or translate them into interventions. Observational epidemiological studies, Davey Smith says, were “obviously getting things wrong.”

So in 2003, he wrote a paper that outlined how to reframe an observational study as a natural experiment by incorporating a dash of genetic data. Dubbed Mendelian randomization (MR), the technique made use of naturally occurring genetic variation in the human population to assess whether a so-called exposure—such as raised cholesterol, alcohol consumption, or taking vitamin supplements—causes a change in disease risk, or is merely associated with it.

MR relies on the idea that certain genetic variants can have a similar effect as a particular lifestyle or environmental change—for example, a variant associated with naturally high cholesterol levels might be an analogy for consuming a high saturated-fat or trans-fat diet, or for taking little or no cholesterol-lowering medication. Assuming that such variants are randomly spread through the population, regardless of confounding factors such as education, socioeconomic status, and exercise, researchers can use these variants to separate the population into subgroups, similar to the arms of a randomized controlled trial, in an unbiased way.

By comparing disease outcomes in these subgroups, the approach aims to capture the analytical power of a such a trial, which often can’t be carried out in large populations for logistical, ethical, and financial reasons, with the decades’ worth of observational data collected in epidemiological studies. The technique’s unbiased approach “is both its power and its elegance,” says Brian A. Ference, executive director of the Centre for Naturally Randomized Trials at the University of Cambridge in the UK.

Although Davey Smith, now director of two government-funded research centers at the University of Bristol, wasn’t the first to have the idea, his exposition on the topic of MR laid a foundation for researchers. As vast amounts of human genetic data became available from genome-wide association studies (GWAS) and other genetic assays in the 2000s, MR’s popularity began to climb.

According to PubMed, researchers had published just 120 studies containing the term “Mendelian randomization” by the end of 2010. That number had skyrocketed to more than 1,900 by the beginning of 2020. The approach is beginning to have an influence on public health, too: for example, results from MR studies form a substantial part of the evidence base for the 2019 European Society of Cardiology and European Atherosclerosis Society Clinical Practice Guidelines for the management of blood lipids, such as low-density lipoprotein (LDL) cholesterol.

But some researchers worry that the technique isn’t always being used correctly, making MR studies’ results difficult to interpret and challenging to apply to problems in public health. Others point out that underlying assumptions of MR concerning the distribution of genetic variants in the population and the relationship between variants and associated phenotypes make the method prone to bias, leaving the approach’s value as a tool in epidemiology uncertain.

Studies using MR have begun overturning widely held beliefs in epidemiology, particularly in cardiovascular disease, a common yet complex illness associated with many genetic variants and lifestyle choices. One such belief is that higher blood levels of high-density lipoprotein (HDL)—sometimes popularly referred to as “good cholesterol”—carry lower risk of coronary heart disease, a finding apparently supported by years of observational data.

In a 2008 study, Ruth Frikke-Schmidt and colleagues at the University of Copenhagen used MR to sort people from three large Danish population studies into subgroups based on their variant of the ABCA1 gene, which is involved in making HDL, and found no link between HDL cholesterol and heart disease. Subsequent MR studies supported these results, and large randomized controlled trials have shown that niacin, a compound that raises HDL cholesterol, does not reduce the occurrence of cardiovascular events, and may actually cause adverse effects.

MR has contradicted observational studies of dietary supplements, too. For example, observational studies in the 1990s showed that vitamin E, an antioxidant, was associated with reduced risk of cardiometabolic disease. Randomized controlled trials on vitamin E supplements followed, but most showed no benefit, and some hinted that vitamin E might increase the risk of heart disease and risk of death due to any cause. Sure enough, when a 2019 study used MR to assess lifelong vitamin E exposure using variants of  genes associated with different levels of the compound, it found that higher vitamin E was significantly associated with increased risk of coronary artery disease and heart attack.

The approach hasn’t just overturned well-accepted beliefs, it has contributed a more nuanced understanding of the complex relationships between lifestyle factors and health.

Alcohol consumption is another lifestyle choice that affects disease risk. Observational studies show a positive correlation between alcohol consumption and the risk of various cancers and other diseases. But some health conditions seem to buck the trend, with observational research showing that drinking up to 100 grams of alcohol per week—the equivalent of one or two drinks a day—is associated with a lower incidence of stroke and heart attack, compared with no drinking or heavy drinking.

The findings are regularly publicized in the media, but many researchers have feared that reverse causation plays a role—people who choose not to drink may do so because they are already sick, for example. Large, long-term randomized trials to get to the bottom of the issue are infeasible. So last spring, a team led by Iona Millwood and Zhengming Chen at the University of Oxford coauthored a paper with Davey Smith that applied MR to the question.

The researchers focused on two genetic variants common in east Asian populations that would influence an individual’s alcohol consumption, the team assumed, independently of confounding lifestyle or physiological factors. The first variant, ALDH2-rs671, slows the breakdown of acetaldehyde—a highly toxic metabolite of alcohol—and causes discomfort when drinking. The second, ADH1B-rs1229984, accelerates alcohol’s conversion to acetaldehyde, also causing discomfort when drinking. People with these variants are healthy, but drink less than average or not at all, depending on the specific variants they inherit, on account of the side effects.

The researchers sorted the 512,715 adults in the China Kadoorie Biobank by allele and found that, on average, those who drank alcohol, even at low levels, had higher risk of elevated blood pressure and stroke than those who didn’t, and no difference in the risk of heart attack. The results indicate that alcohol increases blood pressure and the risk of stroke, says Davey Smith, “which, sadly, is probably the right answer.”

The approach hasn’t just overturned well-accepted beliefs, it has contributed a more nuanced understanding of the complex relationships between lifestyle factors and health. For example, LDL cholesterol—so-called “bad cholesterol”—and blood pressure are known risk factors for cardiovascular disease. But researchers have been unsure for how long and by how much a person should reduce their levels to have a real effect on disease risk.

To address the issue, Ference and colleagues recently carried out an MR study that focused on 100 genetic variants linked to LDL and 61 linked to systolic blood pressure in around half a million people in the UK Biobank. They gave each person a genetic score for LDL and blood pressure depending on how many reduction-associated alleles he or she had in each category, and used those scores to split the population into high or low exposure groups for each factor.

Their study, published last September, found that “even modest reductions in either LDL or blood pressure—or particularly the combination, because they’re independent—can dramatically reduce the lifetime risk of cardiovascular deaths,” says Ference, who acts as an advisor and receives funding from companies including Amgen, Merck, and Regeneron for work related to MR and drug discovery. He adds that this MR study will be the basis of a new lifetime cardiovascular disease risk prediction algorithm for the European Society of Cardiology, and could encourage people to lower their LDL levels as early in life as possible to maintain good health.

Limitations and assumptions of MR studies

As the number of MR studies has climbed, researchers such as Davey Smith worry that the average quality has fallen. MR “is possibly too easy to do now,” he says. “There are many very poor papers.”

One issue is a lack of transparency in how findings are reported, a common problem in biomedical research but one that could be particularly harmful for a new, unfamiliar technique with the potential to profoundly influence the public’s health choices. A 2019 paper examined MR studies in oncological research and found that of 77 MR papers published in 2016 and 2017, 50.6 percent omitted subjects’ characteristics such as ethnicity or age and 68.8 percent didn’t use appropriate statistical techniques, making it hard to replicate findings and interpret results.

“The researchers should really report certain items in more detail,” says the University of Hong Kong’s Herbert Pang, who coauthored the review. “Otherwise, it’s hard for subsequent researchers or readers to understand what actually was done.”

We are learning that, for a lot of genetic variants, they don’t have just a single association with a single risk factor but are associated with a range of traits and conditions.

Besides not reporting results properly, “most of the MR studies do not frame a clinically relevant question,” says Ference. To inform public health decisions and make clinical recommendations, MR studies should provide the sort of specific information collected by a clinical trial: they should first establish a causative link between an exposure such as alcohol consumption and a health outcome, then determine the shape and magnitude of the dose-response curve—how much a specific increase in alcohol consumption effects disease risk, say—and then figure out how to translate the beneficial or harmful effect of that relationship into an expected short-term improvement from a therapy or lifestyle change. Most MR studies stop at step one, Ference says, limiting their clinical usefulness.

More problematic still is that the assumptions underlying the MR approach may be more easily violated than some researchers appreciate. For example, the assumption that genes are randomly allocated among members of the population is unlikely to hold true in many cases, says Stephen Burgess, a biostatistician at the University of Cambridge. In fact, certain genetic variants could be clustered within a family or among people with common ancestors, especially within a geographic area, potentially confounding the results.

The implicit assumption that a genetic variant can be associated solely with one phenotype such as high LDL levels has also been questioned. Indeed, GWAS studies show that most genetic loci are associated with multiple outcomes. “We are learning that, for a lot of genetic variants, they don’t have just a single association with a single risk factor but are associated with a range of traits and conditions,” says Burgess, challenging the interpretation of MR study findings.

These problems are not always acknowledged by researchers working with the MR approach. Pang’s study found that more than 50 percent of MR studies in oncology didn’t even mention MR’s assumptions or their effects on the interpretation of the data.

Maria Glymour, a social epidemiologist at the University of California, San Francisco, says that keeping perspective is key. “I think of health research as so challenging that we should be using every tool that would help us crack these puzzles, and MR is such a great idea as a new tool,” she says. “Health researchers should be aware of it and be aware of its power, and also be honest about the limitations.”

Rachael Moeller Gorman is a Boston-based science journalist. Find her at rachaelgorman.com or on Instagram @rachaelmoellergorman. 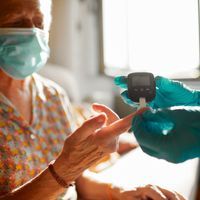