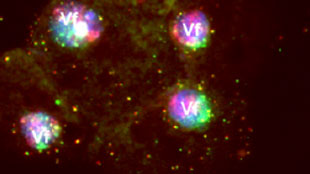 Desnues et al, 2012.In the contact lens fluid of a French woman with inflamed eyes, scientists have discovered several new parasites, nested inside one another like Russian dolls.

Bernard La Scola and Christelle Desnues from the CNRS in France found that the fluid was contaminated with an amoeba infected by a new giant virus, which they called Lentille virus. Inside that, they found a virophage—a virus that can only replicate in cells infected by another virus—which they called Sputnik 2. Deeper still, they found tiny chunks of parasitic DNA, which they called transpovirons, that can hop around Lentille virus genomes and stow away inside Sputnik 2. They published their results today (October 15) in the Proceedings of the National Academy of Sciences.

Lentille belongs to a group of giant viruses called Mimiviridae. First discovered in 2003, new members have been rapidly added to the family tree ever since....

Sputnik 2 is the fourth known virophage. La Scola and Desnues found the first—Sputnik—in 2008, under similar circumstances. It infected a giant virus called mamavirus, which infected an amoeba found in dirty water from a Parisian cooling tower. Mamavirus copies itself by creating large viral factories inside the amoeba, and Sputnik replicates by hijacking these factories at the giant virus’s expense.

Two more virophages were found in giant viruses last year—Mavirus, discovered by Suttle, and OLV, found in an Antarctic Lake by Ricardo Cavicchioli from the University of New South Wales.

Of the virophages found so far, however, Sputnik 2 holds a important distinction: it can insert its DNA into its host’s genome, just as other viruses such as HIV and herpes, insert their DNA into the genomes of infected animals.

Jean-Michel Claverie, also at the CNRS but not involved in this study, says that this discovery could explain why different giant viruses often carry similar genes. By fusing with the genomes of their hosts and hopping out again, virophages could act as “vehicles for gene transfer between these giant viruses,” he said.

The team also looked “in the trash,” said team leader Didier Raoult, examining DNA fragments found inside the giant viruses did not seem to be a part of the Lentille virus or Sputnik 2 genomes. In doing so, they found an independent stretch of DNA inside Lentille virus that outnumbers the giant virus’s own DNA by as much as 14 times and can insert itself into the virus’s genome or stay outside of it. Mobile pieces of DNA have been found in giant viruses before, but Raoult saw this as a new type, one with similarities to the transposons that jump in and out of the genomes of living cells. The researchers dubbed the new mobile element a transpoviron.

The transpovirons seem to rely on the giant virus to replicate, and while the details are unclear, these sequences are very good at reproducing. When Lentille virus first infects the amoeba, the transpovirons are “produced like mad” according to Raoult, at an earlier stage and to a greater extent than the genes of either the virophage or virus. They can also stow away inside Sputnik 2, and Raoult thinks that they may ride from one giant virus to another aboard virophages.

The transpovirons seem to be a mish-mash of DNA from many sources. They contain between six to eight genes, including some that look to have come from giant viruses, others that are similar to virophage genes, and at least one that may have come from bacteria.

The same is true for virophages themselves. Sputnik’s tiny genome contains genes that look like they came from giant viruses, bacteria, or eukaryotic cells. Mavirus has genes that look like jumping genes called “Maverick transposons,” which are also found in eukaryotic cells, including those in humans. These eukaryotic Maverick sequences may evolved from virophages. Since virophages hamper the replication of giant viruses, Suttle suspects that early cells might have protected themselves from such viruses by incorporating virophages into their own genomes, effectively domesticating them.

Raoult suspects that many more virophages and transpovirons await discovery. “Very few people work on giant viruses, and [transpovirons] may have been neglected as they are unexpected,” he said. His team has already found more such elements in the genomes of three other giant viruses.

Suttle agrees. “The natural viral world encompasses the greatest genetic and biological diversity on Earth,” he said. “Its continued exploration will undoubtedly unlock many more secrets that fundamentally change our understanding of the evolution and diversity of life on our planet.”