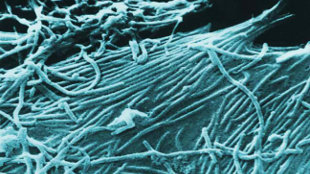 Researchers have a new hope in the fight against the possibility of a biological attack—an Ebola vaccine that protects mice from the hemorrhagic fever’s deadly grip. The vaccine combines antigens with a protein in complex to prime a more robust immune response, and can be grown quickly in tobacco plants, making it feasible to quickly ramp up production in the event that the Ebola virus is released as part of a terrorist attack, according to the study published Monday (December 5) in the Proceedings of the National Academy of Sciences.

The combination of an antibody, an antigen, and an immune booster is novel,  said Erica Ollmann Saphire, a structural biologist at Scripps Research Institute in La Jolla, Calif., who was not involved in the study.  “Your immune systems see those [complexes] as the kinds of things that happen in infection, so you mount a...

Every several years, Ebola emerges from its natural reservoirs in African forests and causes human outbreaks, killing 50 to 90 percent of the people infected. The lethal disease depletes the clotting factor in victims’ blood, causing them to hemorrhage internally, said co-author Melissa Herbst-Kralovetz, an immunologist at Arizona State University (ASU). The US government increased funding for Ebola vaccine research after September 11 because of its potential use in a bioterrorism attack.

The virus’s remote endemic region and rare occurrence means “there’s just no practical way we would start immunizing everyone” before they’ve been exposed, said co-author Charles Arntzen, an infectious disease specialist at  ASU. Yet Ebola kills so quickly that by the time the immune system has recognized the virus and mounted a response, a victim is usually dead. The key is to provide infected people with an instant dose of antibodies at first, while also priming the immune system to develop long-lasting immunity.

One problem that has plagued researchers looking to develop an Ebola vaccine, however, is how to produce large quantities of the outer shell glycoprotein that the body uses to recognize the Ebola virus. When the glycoprotein accumulated in the transgenic yeast or mammalian cells used to mass-produce it, the cells would die, Arntzen said.

But by fusing the glycoprotein with an antibody that helps the immune system recognize the protein, plant cells view the complex as completely unknown type of molecule and simply shuttle the complex to storage vacuoles where they are harmless. As a result, the immune complex can be grown in transgenic tobacco plants, which can produce the vaccine more quickly than yeast or mammalian cells. Furthermore, production can be scaled up as needed, making it a feasible method for building a government stockpile.

But while the complex is harmless to the plants, when injected into mice, the immune system more easily recognizes the large the complex as a potential threat and triggers a stronger response than just the glycoprotein alone,  while an immune booster works to further accelerate the body’s immune response. In a separate paper in PNAS, researchers reported an efficient method of producing large quantities antibody to provide immediate post-exposure protection from the virus. The two compounds could theoretically be used together to provide long-lasting protection after Ebola infection, Arntzen.

Testing the vaccine on mice exposed to a lethal dose of Ebola, “to our delight the mouse immune system responds beautifully to the antibody complex,” Arntzen said, and about 80 percent of the mice survived.

But like all other Ebola vaccines in development, the work is far from over, said Chad Roy, an infectious disease aerobiologist at Tulane National Primate Research Center, who was not involved in the study.  “It’s a great first step, but boy are there a lot of other steps.”

The study was done in mice, but because Ebola virus isn’t normally lethal to mice, the vaccine was tested against a modified version of the virus. The protection should be shown in another mammal species, likely rabbits or guinea pigs, and then verified in a primate species such as a macaque, Roy said.

Next the vaccine would be tested for safety and its ability to stimulate an immune response in humans. Finally, there’s the hurdle of testing the vaccine’s efficacy in people. Because it’s not ethical to administer the virus to healthy individuals, the only option is to “just sit and wait” until there’s a natural outbreak of the disease, Arntzen said. “We know there will be another Ebola outbreak sometime, we just don’t know where or when.” (Stay tuned for The Scientist’s upcoming January feature on other Ebola vaccines in development, and one company’s attempt to sidestep human efficacy trials by testing flu patients.)