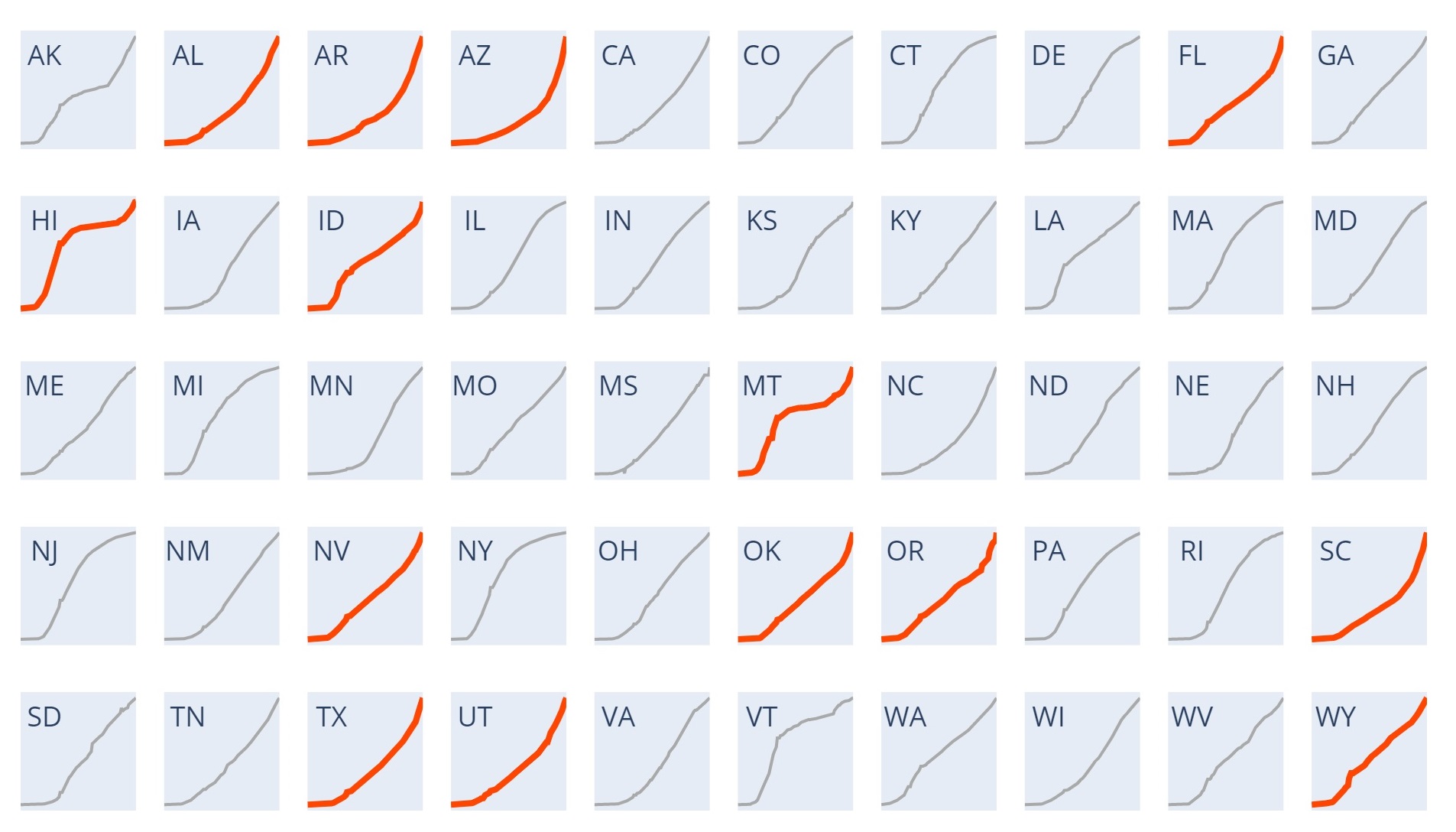 The cumulative number of cases in each state since the beginning of March (adjusted to the same scale). States highlighted in orange have seen more than a 50 percent increase in the average number of reported daily new cases in the last two weeks compared to the two-week period before that.
C. OFFORD/DATA FROM US STATE GOVERNMENT WEBSITES

The growth in the number of COVID-19 cases is accelerating substantially in more than one-quarter of US states, as federal and local governments grapple with how to ease lockdown measures brought in to help slow the pandemic.

Arizona, Texas, Florida, and Oregon are among 14 states to have seen more than a 50 percent increase in the average number of daily new cases in the last two weeks compared with the two weeks before that. So far, the US has counted more than 2 million cases and 120,000 deaths from COVID-19.

“The situation in Florida and Arizona is really concerning,” Harvard University epidemiologist William Hanage tells Reuters. The data from these states indicate that there is an “underlying outbreak of unknown size,” not just higher case numbers due to increases in testing, he adds.

These states are also seeing higher numbers of hospitalizations due to COVID-19. KOLD News 13 reported last week that intensive care units (ICU) were rapidly reaching capacity in southern Arizona hospitals, while over the weekend, California hit a record number of 3,702 people hospitalized with confirmed COVID-19, plus a further 1,102 hospitalized with suspected COVID-19, NPR reports.

Some health researchers have suggested that the relaxation of social distancing and other measures in some states earlier this month may have contributed to the spikes in cases.

Peter Hotez, dean for the National School of Tropical Medicine at Baylor College of Medicine, tells NPR that accelerating rates of infection in Arizona and parts of Texas, for example, are likely due to the removal of public restrictions combined with public health systems that are already under strain.

“It was just open it up and then more or less business as usual, with a little bit of window dressing,” Hotez says. “This is not an abstract number of cases. We’re seeing people pile into intensive care units.” Hospitalizations of people testing positive for COVID-19 hit a record high in Texas this week, with more than 3,700 people admitted as of yesterday. State officials have said that hospitals still have plenty more beds to accommodate an influx.

Health authorities in some areas of Texas have also cited “COVID-19 fatigue” among young people, who have been able to patronize bars and restaurants operating at 75 percent capacity since mid-June and may have been adhering less to social distancing measures than before.

Texas Governor Greg Abbott warned in a press conference this week that failure to maintain social distancing could result in bars and restaurants having their alcohol licenses suspended for one or two months. Infections are spreading at “an unacceptable rate,” he said.

In Oregon, at least 236 new cases have been linked to a church in Union County, where there were reports of hundreds of people gathering and singing during a service on May 24, according to The Oregonian. Large gatherings in places of worship weren’t permitted in the county until June 5.

That outbreak accounted for nearly half of the new cases reported statewide in the first half of last week. However, “many of the recent positive cases are touching various areas of our community and are not confined to one location,” Carrie Brogoitti, the public health administrator for the Center for Human Development in Union County, said in a statement, OPB reports.

Oregon was one of several states, along with Utah and Tennessee, to pause the lifting of restrictions as the rate of new infections began to climb earlier this month, according to Politico. Yesterday, Louisiana Governor John Bel Edwards announced that he too would delay the next phase of reopening as infections picked up pace across the state.

“We simply are not ready to move to the next phase, and ease restrictions further as businesses open widely,” Edwards said in a statement that also acknowledged the spikes in cases seen in neighboring states such as Texas, Alabama, and Florida, and implored people to maintain physical distance.

“It is up to all of us to check our own behaviors and to take responsibility for slowing the spread of COVID,” he continued. “We do not want to have to go back to a time of increased restrictions where fewer businesses could operate.”

Some health officials have also expressed concerns about the potential for COVID-19 transmission during protests taking place across the country in the last month in response to the killing of George Floyd by police in Minnesota. The Wall Street Journal reported last week that early data indicate that transmission at these events was minimal, possibly thanks to their outdoor location and the wearing of masks by many people who attended.